Autumn is upon us and the flowering season draws to a close. But as we didn`t have a proper frost so far in Reading there are still some flowers to be found in the annual meadows.

Cosmidium (picture below) is still flowering and the yellow and red flowers are glowing in the late autumn sunshine. 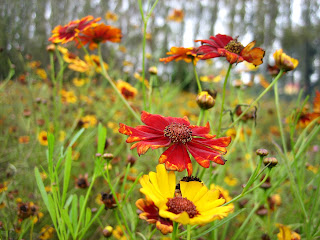 Cosmos (Cosmos bipinnatus; pictures below) is another late flower which will be in flower until the first frosts. 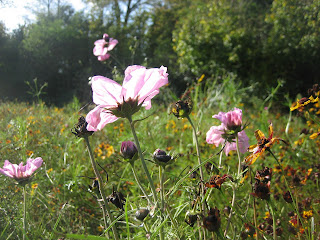 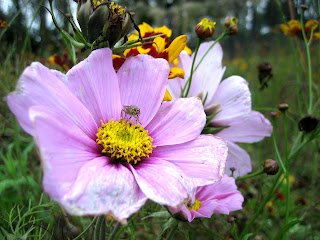 This little spider has found quite a cunning way of catching insects, making use of the Cosmos flower which will attract late pollinators: 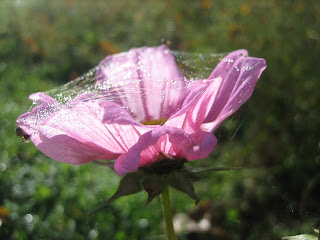 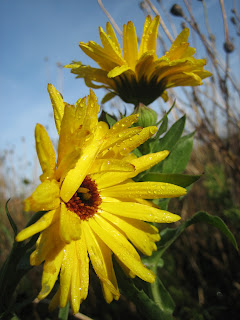 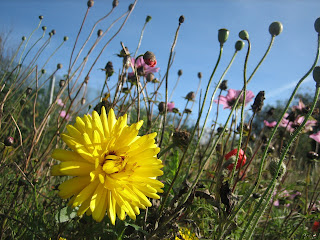 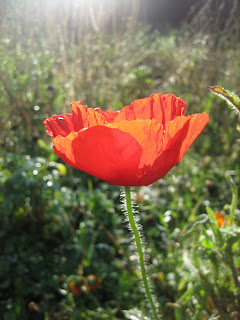 Interestingly, in the annual meadow in Victoria Recreation Ground, Tilehurst, bumblebees were still flying around, collecting pollen from poppy flowers. I have seen at least 10 bumblebees which looked like Bombus terrestris/lucorum. The bumblebee in the picture below was so eager to get at the pollen in the flower that it was falling backwards out of the flower and just managed to get hold of the petal with one tarsus. 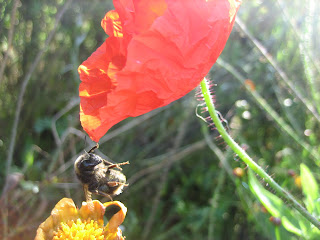 As poppy flowers don`t have nectar the bumblebees must have been after the pollen. But I did wonder why they were still collecting pollen this late in the year, as by now there should be no more larvae to feed. Maybe it has something to do with the erratic weather we had this year.

Update: Apparently Bombus terrestris can, as only bumblebee species in the UK, maintain colonies over winter. They forage on winter flowering ornamental shrubs such as Mahonia, Erica carnea (winter flowering heather) and Arbutus unedo (Strawberry tree). Read more about it here: http://www.foxleas.com/winter.htm
Posted by Reading team at 11:08