Here we are again with an update on the progress of the Reading flower meadows. The annual meadows were sown in the first half of May and are germinating nicely now. The recent rain togehter with the nice sunshine at the moment will help the seedlings to establish and we hope we can see the first flowers at the end of June.

The perennial meadows are making progress as well with the first sown species starting to flower. Meadow buttercup (Ranunculus acris), red campion (Silene dioica), white campion (Silene latifolia), red clover (Trifolium pratense), rough hawkbit (Leontodon hispidus), birds-foot trefoil (Lotus corniculatus) and ox-eye daisies (Leucanthemum vulgare) are flowering at the moment and will soon be followed by wild carrot (Daucus carota), black knapweed (Centaurea nigra) and viper`s bugloss (Echium vulgare). The perennial meadow with the most flowers at the moment is the one along Portman Road, so have a look if you happen to drive past it. 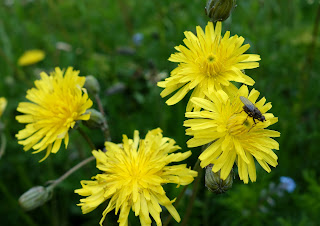 We have now started to sample our perennial flower meadows in Reading. If you see some strange people with insect nets and a measuring wheel, walking along the meadow and staring at flowers, that is probably us. So do say hello if you happen to see us during your meadow visit.