Dandelion (Taraxacum agg.) – a valuable food source not only for pollinators 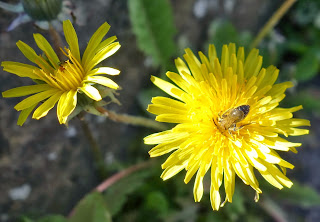 Dandelion (Taraxacum agg.) is probably one of the most well-known and most common wildflowers in the UK. Every year from early spring onwards its cheery yellow daisy flowers pop up in parks, on road verges, in neglected corners and, to the dismay of many gardeners, in allotments and gardens as well. Dandelion is often seen as a nasty weed as the long tap root makes the plants difficult to remove and the delicate seed heads (clocks) release their seed load in the slightest breeze, spreading seeds far and wide.

What we know as dandelion is in reality an aggregation of many different species, subspecies and microspecies, all looking very similar and are in most cases only identifiable by experts. The exact number of dandelion species/subspecies/microspecies is still unresolved.

As dandelion is often unwelcome and removed where possible it is worth spending a few moments to reflect on its usefulness to pollinators. Dandelion is in flower for most of the year but has its peak flowering time from late March to May; exactly the time when many pollinators emerge after they have survived winter in hiding places (bumblebee queens, hoverflies, butterflies), a hive (honeybees) or in nest chambers (solitary bees) and are now out and about looking for food.

A dandelion flower head may look as if it is just one big single flower but each flower head actually consists of 40-100 little flowers (florets) all clumped together to one big yellow daisy flower. As each of these little flowers contains nectar and pollen, just one flower head provides a huge food resource for hungry visitors.  Pollinators also do not need a lot of time and energy to collect the pollen and nectar as all those little flowers are so close together that no energy-intensive flying is necessary to visit each of them. Finding a patch of dandelion flowers in early spring when other flowers are often few and far between can make all the difference to early pollinators.

On a sunny day in March or April have a look at the dandelion flowers when you are out and about and you will be surprised how many pollinators you will see. You may spot big bumblebee queens (most likely buff-tailed bumblebee (Bombus terrestris) queens which can emerge from March onwards and are quite common), smaller solitary bees such as mining bees (Andrena spp.), the occasional honeybee, hoverflies especially from the genus Eristalis spp. (Eristalis tenax and E. pertinax are quite common and mimic honeybees) and the occasional early butterfly if you are lucky.


And if this is not enough, dandelion leaves are edible when picked young. The leaves are rich in calcium, iron, antioxidants and vitamins and have a number of health benefits especially for liver, kidney and gallbladder. Do not pick the leaves at roadsides or in areas where pesticides are used.

Even when picked young, dandelion leaves can be very bitter when eaten raw so use them sparsely in a salad or on a sandwich. To get milder leaves you can put a dark plant pot (cover the holes) or other light-proof container over the plant for a couple of weeks or longer. Once the leaves have lost most of their green colour you can harvest them. They are not as nutritious as green leaves butwill taste a lot less bitter. Another way to remove the bitterness in the leaves is to boil the leaves 2-times for about 3 min (use fresh water for the second boiling) before adding them to dishes. Dandelion leaves can be used in salads, sandwiches, pesto, stir fries, soups and many other dishes. You just need to be a bit adventurous.

So why not leave some dandelions to flower in your garden next year? You can always remove the seed heads if you do not want them spreading their seeds around. Pollinators will thank you and you may even get some food for free if you harvest some of the leaves for the kitchen. 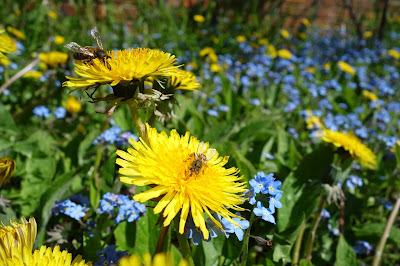