The pollination of orchid flowers 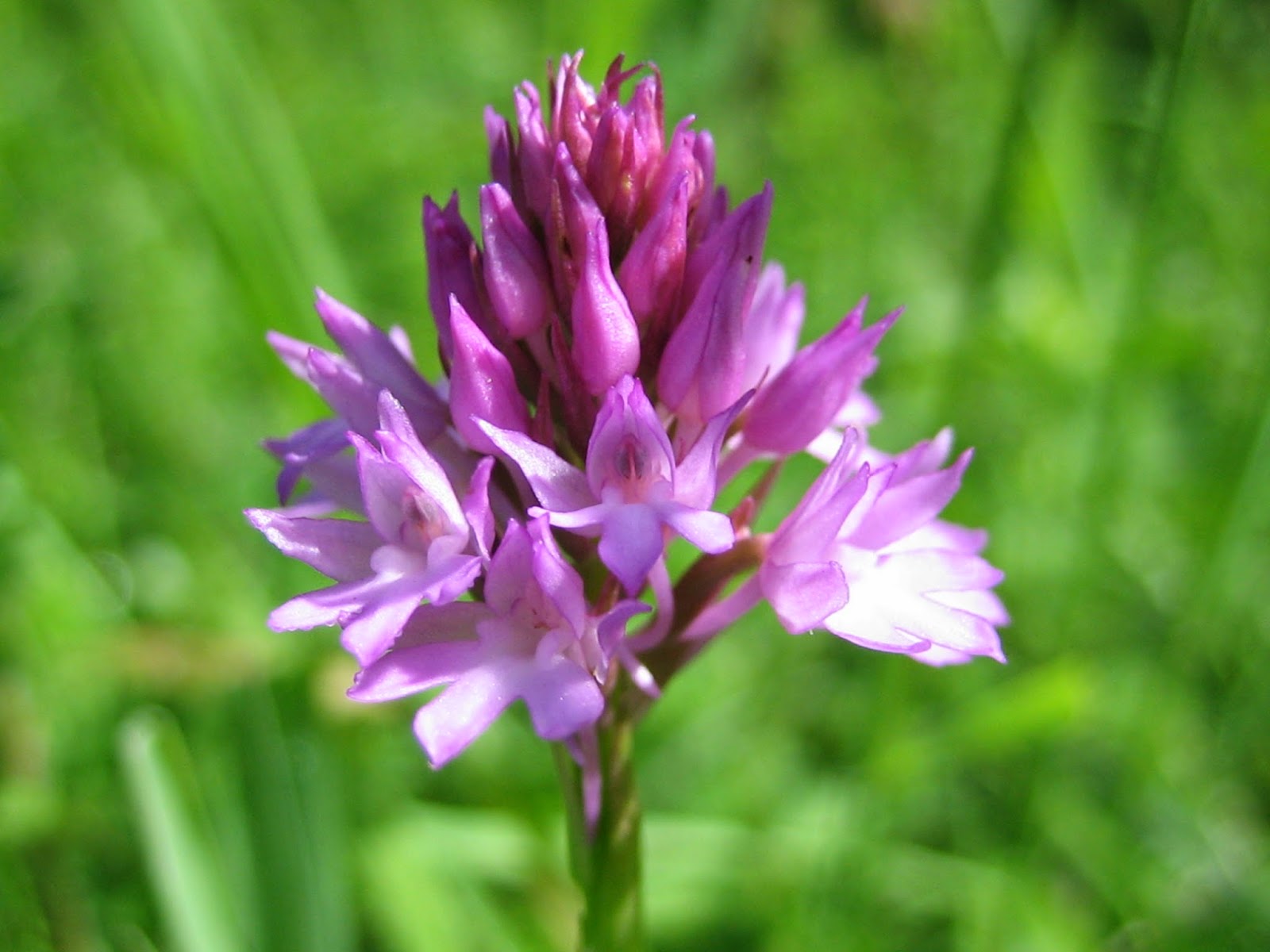 Orchids are one of the most advanced families of flowering plants with worldwide currently 21 000 to 26 000 accepted species in 880 genera. Orchids have evolved a diverse range of pollination mechanisms with an increasingly precise adaptation to particular flower-visiting insects. Some orchids offer a reward in the form of nectar but other orchids deceive potential pollinators by pretending to provide rewarding nectar or a potential mate. Others simply trap flower-visiting insects inside the flower and usually do not release them before the insects have done their deed.


The orchid flower itself consists of 6 perianth segments (3 outer segments and 3 inner segments). One inner segment forms the lip (labellum) which is always enlarged (and often modified) and functions as a landing platform for insects at the bottom of the flower. The lip often has a spur or nectary at the base. Orchid flowers have lost most of the stamens or reduced them to sterile vestiges. The remaining stamens and the stigma (the part of the flower which receives the pollen) are fused into a stout column which projects from the centre of the orchid flower just above the lip. Most orchids have only a single fertile anther (the part of the flower which contains the pollen), but a few orchids such as Cypripedium (Lady`s slipper orchids) still have two fertile anthers.
In most orchids, the pollen grains are bound together by threads of a clear, sticky substance (viscin) in masses called pollinia.

The Lady`s slipper orchids (Cypripedium) are still quite primitive orchids. The flowers of the native Lady`s slipper orchid (Cypripedium calceolus) have a brightly yellow pouch-like lip with a fruity scent but offer no reward (nectar). Nevertheless female mining bees mostly of the genus Andrena are attracted to the flowers. The bees enter the lip and get trapped. After a few minutes of undirected efforts to escape the bees start to prise methodically under the stigma until a passage through the back of the flower opens. But in order to get out they have to walk past the stamens which smear sticky pollen on the upper side of the thorax of the bee. When visiting the next flower the bees first leave the pollen on the stigma before picking up another load of pollen.


Helleborines (Epipactis and Cephalanthera): The flowers of the Marsh helleborine (Epipactis palustris) have no noticeable scent but are producing nectar as a reward and are visited be a wide variety of insects such as bees, wasps, ants and flies. On top of the flower sits a large projecting rostellum which bears a broad stigma below and the anther (containing the pollinia), which overhangs the rostellum. Visiting insects land on the lip and depress it while drinking the nectar. They do not touch the rostellum in this position. But as soon as they are leaving the weight is taken from the lip and the insect is forced into an upward motion which pushes it against the rostellum which attaches the pollinia firmly to the insect`s head.


Twayblades (Listera) have a similar pollination mechanism to the Helleborines (see above) but the greenish flowers are particularly attractive to ichneumon wasp males (Ichneumonidae). Sawflies and beetles are visiting the flowers as well. The long thin downward-pointing lip forms a landing platform leading to the centre of the flower. Lots of nectar is produced in a groove, running up the centre of the lip. The insect, while feeding on the nectar, walks up the lip until its head hits the rostellum and subsequently gets the pollinia glued to it with a viscid liquid exuded by the rostellum.

Orchids in the genus Orchis have evolved a different pollination mechanism. The orchids often have numerous large and scented flowers which mimic the appearance and scent of typical nectar flowers. But unlike true nectar flowers these orchid flowers offer no nectar at all.

The Early-purple orchid (Orchis mascula) has relatively large flowers with a broad lip which has a long stout spur at its base. The insect visiting the flower lands on the lip and inserts its tongue into the spur in order to drink the nectar it thinks is there (in reality there is no nectar produced). While doing so the head touches the rostellum which splits open and sticks the pollinia to the insects head. Interestingly the pollinia will change position on the head of the insect during its flight to the next flower to be in exactly the right position to strike the stigma. As the pollinia remain attached to the insect`s head several flowers can be pollinated in one go.
The main visitors to these flowers are queen bumblebees, cuckoo bumblebees and also some solitary bees and flies. The food deception only works because the orchids have a superior flower display quite early in the year when other flowers are rare and as newly emerged bees are quite inexperienced they easily fall for the sham. Additionally the orchids also often vary the appearance of their flowers so that the insects cannot learn to avoid them.


Food deception is also found in species of the genus Dactylorhiza which are often pollinated by bumblebees and honeybees.

Other orchids are pollinated by butterflies and moths such as Gymnadenia, Platanthera, Nigritella and Anacamptis. The Fragrant orchid (Gymnadenia conopsea) has heavily scented long-spurred pink flowers which produce copious amounts of nectar and are mostly pollinated by moths. Once the moth inserts its proboscis into the spur to drink the nectar the pollinia are stuck to it. 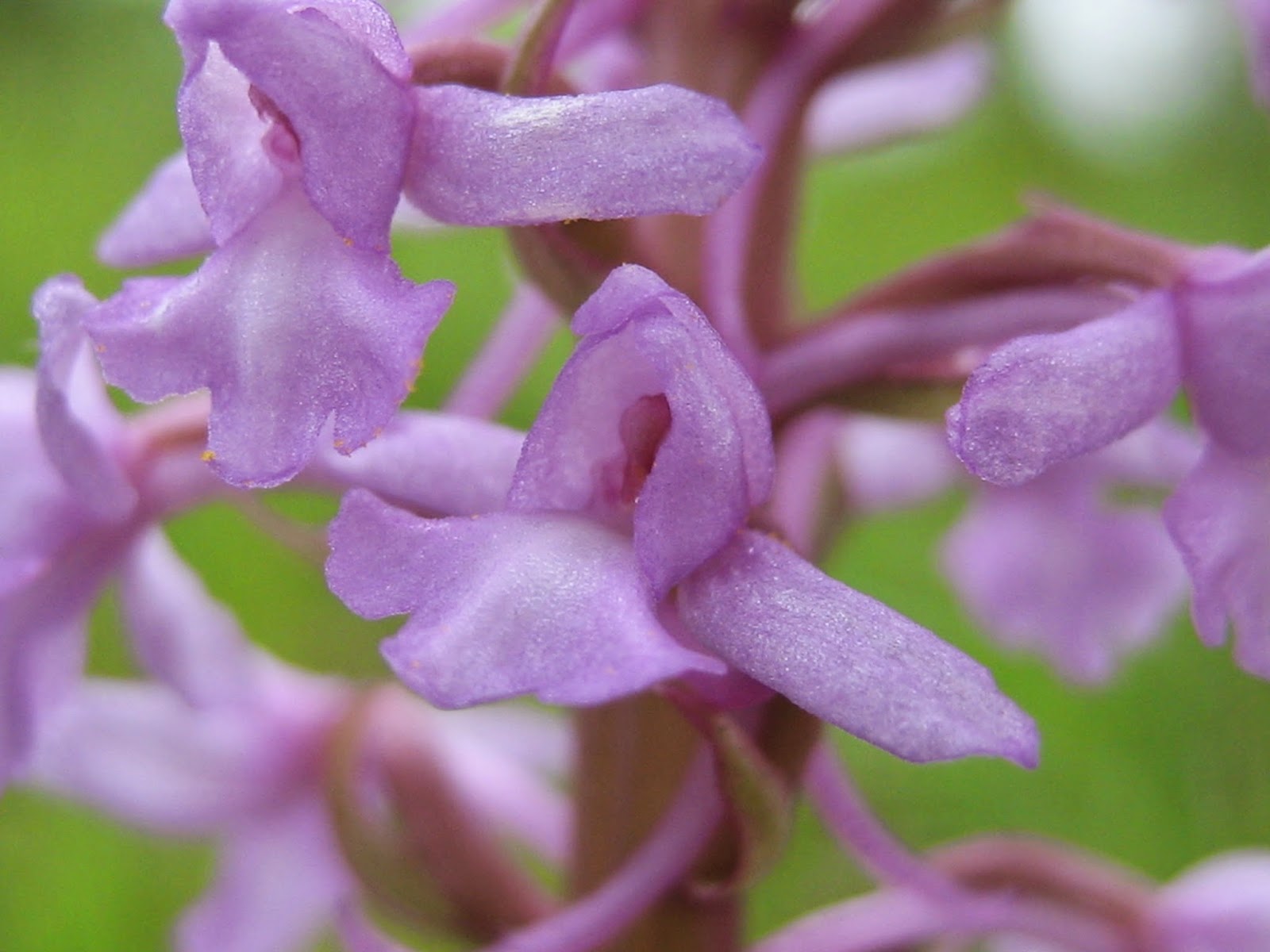 The Pyramidal orchid (Anacamptis pyramidalis) attracts a large number of both butterflies and moths. The proboscis is guided straight into the spur by converging ridges on the lip and once the proboscis is fully inserted in the spur the pollinia are firmly cemented in place with a viscid matter. But conversely to Butterfly and Fragrant orchids, Pyramidal orchids produce no free nectar so it is not fully clear why insects visit these flowers so persistently.


Sexual deception (also called ‘pseudocopulation’) is used as pollination strategy in the genus Ophrys (and other orchid genera). Some orchids in the genus Ophrys resemble various insects such as flies or bees and produce scents which resemble scents produced by insects to attract mates. The scent produced by the orchid often does not match the scent produced by the insect exactly so the orchids depend on the availability of newly emerged males when females are not yet present.

The Fly orchid (Ophrys insectifera) has flowers with a rather long and narrow dark-reddish brown lip with a metallic-blue patch in the middle. The two upper petals are very narrow and resemble insect antennae. The only regular pollinators to these flowers are males of the solitary wasp species Argogorytes mystaceus and A. fargei which are attracted to the orchid flowers by scent. The wasps settle down on the lip with the head close to the centre of the flower. After frequently changing position for a few minutes they start to perform movements which look like an abnormally vigorous and prolonged attempt at copulation. During this ‘pseudo copulation’ the pollinia are stuck to the head of the wasp.

The commonest Ophrys species in Western Europe is the Bee orchid (Ophrys apifera) which does not depend on pollinators but instead regularly self-pollinates. While insects occasionally visit the flowers they do not seem to be very effective pollinators. Normally after a few days the pollinia fall out of the anther and hang down in front of the stigma. A slight wind swings the pollinia against the sticky stigma which leads to pollination.


As you can see, orchids are a truly amazing and interesting family of plants and represent an extraordinary example of adaption to insect visitors.