Winter flowers for bees and other pollinators

Most native wildflowers stop flowering in winter and apart from the occasional dandelion or lawn daisy there is not a lot on offer for pollinators. To evade food-shortage and freezing temperatures in winter pollinators have evolved different strategies to survive (either as adult, egg, larvae or pupae) and it is unlikely you see a pollinator collecting nectar and pollen in winter in the countryside or in the north of the UK. 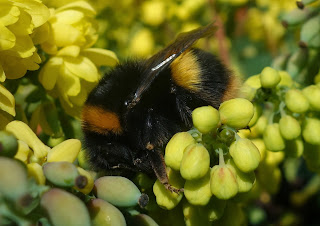 But the picture can look quite different in towns and cities, especially in the south of the UK. Milder winters and the planting of winter-flowering ornamental plants in gardens and parks have boosted numbers of winter-active pollinators, the most obvious of these the buff-tailed bumblebee (Bombus terrestris) which maintains winter-colonies  mainly in the south of the UK.


Some young Bombus terrestris queens especially in towns and cities in the South do not hibernate anymore as their counterparts in the countryside and in the north of the UK would do but built and maintain colonies right through winter and take advantage of nectar and pollen-rich winter-flowering shrubs, perennials, spring bulbs and climbers in our gardens and parks.
A study published in 2010 has found that bees active during the winter can attain nectar and pollen foraging rates that match, and even surpass, those recorded during summer. Winter-active bumblebees do not have to compete for nectar and pollen with lots of other pollinators as they would do in summer, so nectar and pollen can be collected more efficiently.
If you see winter-active bumblebees in your garden or your local park the Bees, Wasps & Ants Recording Society (BWARS) would like to know about it. Please submit your sighting here.

Bumblebees are not the only pollinators you can see in winter. Hoverflies and other flies can stay active in winter as well and you can see (among other hoverflies) the quite large honeybee-mimicking hoverflies Eristalis tenax and E. pertinax, flesh flies (Sarcophagidae) and green bottle flies sunbathing or nectar-collecting on the flowers. Wasps can also be seen right into December and honeybees will come out of their hives to forage at  temperatures around or above 10 C.

You can help winter-active pollinators by planting winter-flowering perennials, shrubs, bulbs and climbers in your garden and at the same time enjoy some colour and scent (many winter flowers are scented) in the bleak winter months. Pansies and most other flowering winter bedding plants are of no use  for pollinators as the flowers are often not accessible or produce no nectar and pollen. But have a look at the list below for pollinator-friendly plants which will make your winter-active pollinators happy.

Plants with a long flowering season:

Abelia (Abelia x grandiflora) flowers from summer onwards, often until December if it is not too cold. Abelia is a small shrub up to 4 m tall and needs a sunny sheltered position. 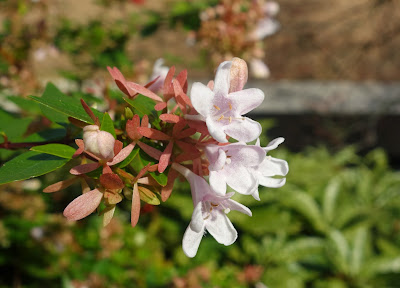 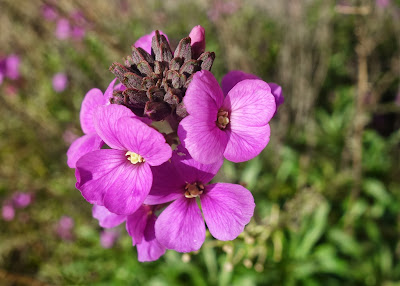 Hebe (Veronica spp.) flowers from summer to autumn but some varieties can flower until winter such as "Midsummer Beauty", "Great Orme", "Gauntletii" and "Autumn Glory". The plants need a sunny and sheltered position as some varieties are not properly frost-hardy in cold winters. 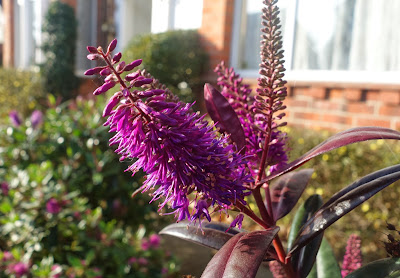 
Mahonia (Mahonia x media, Mahonia japonica, Mahonia oiwakensis ssp. lomariifolia and Mahonia aquifolium) starts flowering from November onwards (depending on the species) and the scented yellow nectar and pollen-rich flowers attract bumblebees, honeybees, hoverflies (and other flies) and wasps. Most winter-flowering Mahonia are large shrubs with often spiny leaves so need a bit of space to grow to their full potential. Plant in well-drained soil in a sunny position. 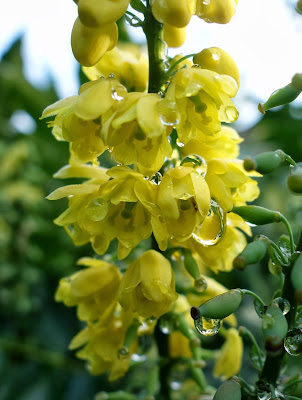 Fatsia japonica (a relative of our native Ivy) is a broad tall shrubby plant which has large leathery leaves and clusters of creamy white flowers from November until January. Plant in a sheltered moist but well-drained position in full sun or partial shade. 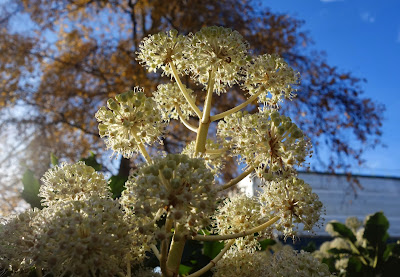 Winter-flowering honeysuckle (Lonicera fragrantissmima) is a deciduous evergreen shrub up to 2 m tall with very fragrant white flowers which open from December onwards. Grow in moist but well-drained soil in full sun or part shade. 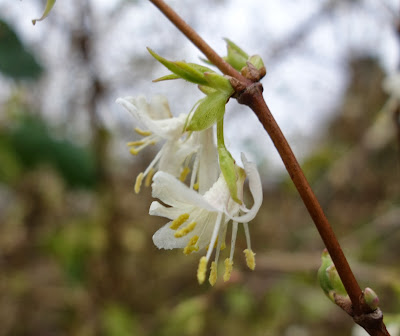 Strawberry tree (Arbutus unedo) is a large evergreen shrub with small bell-shaped white to pinkish flowers which open in November and December. The Strawberry tree needs a warm sheltered spot on well-drained soil in full sun. 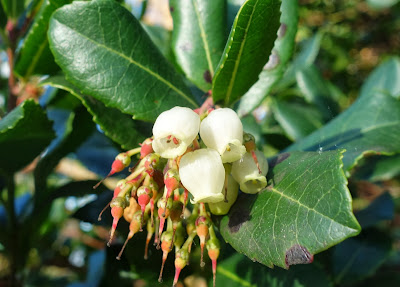 Winter-flowering Clematis (Clematis cirrhosa) is an evergreen climber which needs a sunny sheltered position such as a warm house wall to thrive. The plant flowers from (depending on variety) November until February with large bell-shaped white, greenish or purple flowers which are loved by bumblebees. 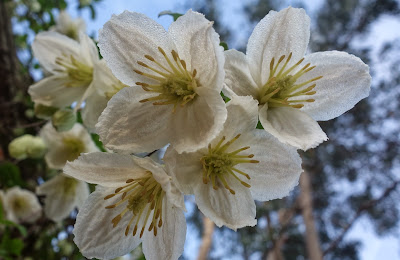 Cornelian cherry (Cornus mas) is a deciduous shrub or small tree and has clusters of bright yellow  flowers which open from February to March. The red, (purple when ripe) cherry-like fruits are edible and are a bit tart to begin with but turn increasingly sweet and juicy when fully ripe. Plant in well-drained soil in sun or part shade. 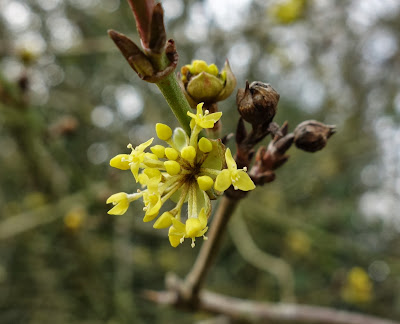 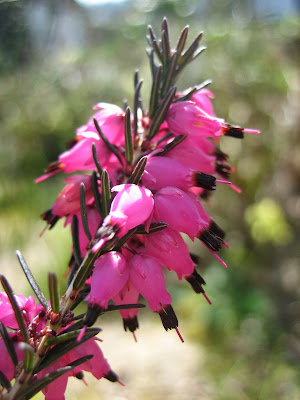 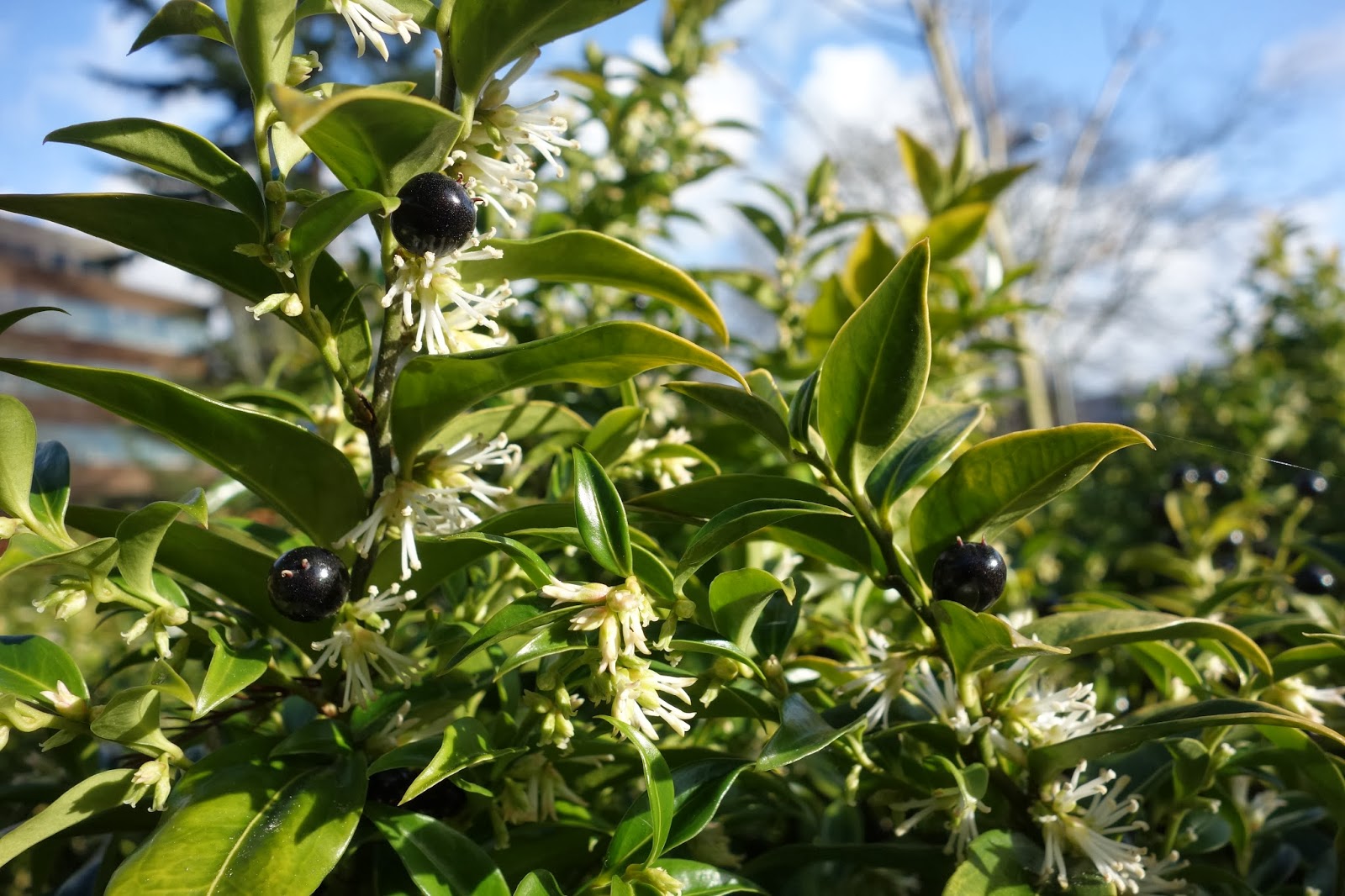 Winter-flowering cherry trees (Prunus subhirtella and others) are often starting to flower from November onwards and flower right into spring with white to pink cherry flowers loved by bees. Grow in any moist but well-drained soil in full sun. 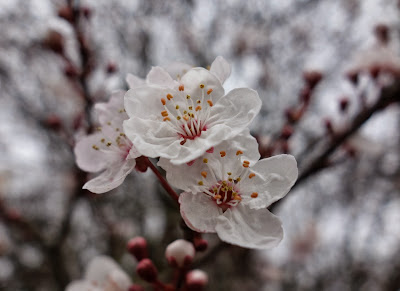 
Primrose (Primula vulgaris) is a rosette forming herbaceous perennial with scented yellow flowers (but many other colours available now as well). The flowers open in mild winters from December onwards. Plant in a sheltered position in sun or part shade. 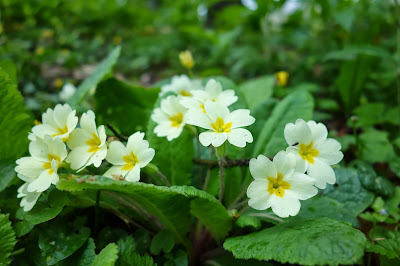 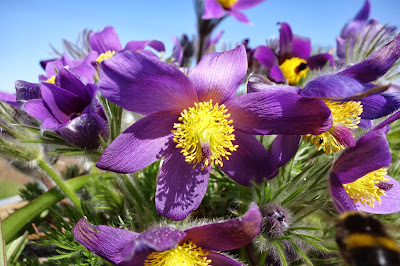 Also have a look at our other blog posts for pollinator-friendly plants for early spring and spring/early summer.
Posted by Reading team at 14:33