With a body length of 16-22 mm, the hornet hoverfly (Volucella zonaria) is  Britain's largest hoverfly species and looks quite spectacular. 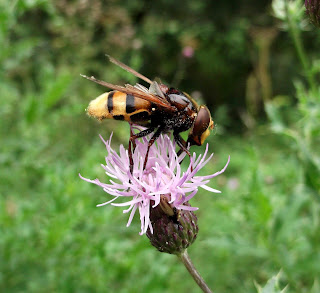 The adults resemble worker hornets and visit a range of flowers such as thistles (Cirsium and Carduus), brambles, privet and buddleia between June and September. The larvae live as commensals in wasp-and hornet nests and eat the detritus accumulating under the central nesting chambers. It is not yet fully understood how female hornet hoverflies are able to lay their eggs in wasp and hornet nests without being attacked. It is believed they may have some "calming pheromone" which keeps them safe.
The pupae overwinter in the soil and finally hatch in spring to form a new generation of hornet hoverflies.

The distribution of hornet hoverflies ranges from Asia and Northern Africa to Southern and Central Europe. In England they are mainly found in the South East, some scattered  records are also known from the South Coast, Devon and the area around Bristol. It appears that hornet hoverflies prefer suburban habitats (presumably because of climatic factors) and can be found in parks, gardens, local nature reserves and other suburban areas with a good supply of flowers and hornet and wasp nests. 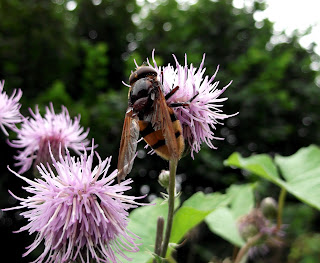 If you life in the South East of England (or any other area within the distribution range), look out for this interesting hoverfly in your garden, park or local nature reserve.
Maybe the hornet hoverfly is just sipping nectar from a flower around the corner and you just have to find it ...
Posted by Reading team at 10:35