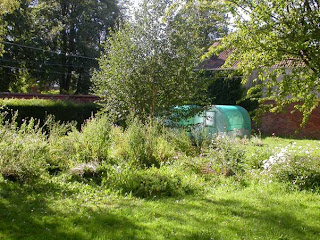 The hanging baskets at the Botanic Gardens, they were kept on the ground.

In collaboration with the University of Bristol and Bristol City Council, I was undertaking a pilot study to see if hanging baskets in the city could be made more ‘pollinator-friendly’ by using native wild flowers instead of or in conjunction with the cultivated varieties already used.

One investigation was to confirm how long the native plants flowered for over the summer to ensure, if used in hanging baskets, that the baskets are as attractive to the public as possible. I carried out observations of the baskets during which I noted what insects visited the flowers, the main culprits being flies, hoverflies, bees (solitary, honey and bumble) and a couple of butterflies. One of my favourites was the hornet hoverfly (Volucella zonaria) because it was large and scary but so harmless.

Another lovely sight was the icing sugar coated honeybees as they flew between the bright pink and white flowers of Musk Mallow.

I also observed hanging basked around the city as a comparison. College Green was awash this summer with a huge array of baskets and troughs. There was a large difference in the number of visitations between the baskets at the Botanic gardens and those in the city, with the Botanic garden’s baskets way out in the lead. However I did often see bumblebees at College Green.

To compare the cultivated flowers like petunias and geraniums used in the Council hanging baskets and the native wild plants at the Botanic Gardens, nectar samples were taken and analysed to show the volume of nectar each species produced and the sugar concentration of it. Surprisingly, the petunias had a large volume and high concentration of sugar, greater than almost all the native wild plants even though no pollinator was seen visiting them. As petunias are native to South America, they probably evolved with pollinators with the means for reaching the nectaries deep within the flower trumpet.

In conclusion, some of the native wild flowers would be unsuitable for hanging baskets due to the shape their foliage produces around the baskets, the height of the flower stalks and their flowering period. Therefore with the species studied it would difficult to produce a solely native hanging basket that was as colourful and flower-ful as the hanging baskets around the city.  However, species such as Scorzoneriodes autumnalis (Autumn Hawkbit) and Lotus ulginosa (Greater Bird’s Foot Trefoil) could be added to the council baskets to increase their the attraction to pollinators.
Posted by Bristol team at 10:32