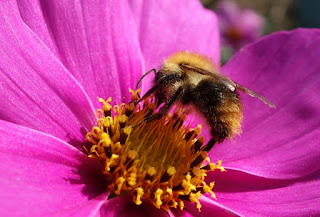 Spring is just around the corner and now is the time to decide what to grow this year in your garden or on your allotment.

Many people will focus on growing vegetables on their plot but maybe you have thought about helping the bees and other pollinators this year and to sow and plant some flowers in between your vegetables.

Maybe you have never grown flowers on your plot before and are unsure what flowers to sow or plant? Or if you already grow flowers every year why not try some you have never grown before? Also have a look at this wildlife-friendly allotment plot and suggestions to attract pollinators and other beneficial wildlife for more ideas and inspiration.

You can also watch the two allotment videos I recently made to see how my own allotment looks now and to get more ideas of what to plant and how to make your plot more wildlife-friendly.


My wildlife-friendly allotment in June/July 2015 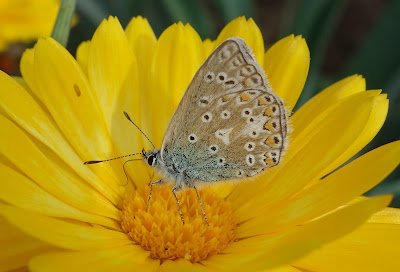 Below I have compiled a list of suitable flowers for allotments and vegetable plots. All of them I have grown for several years now and are easy to grow, nice to look at and good for pollinators. I have also included some advice for sowing and anything else I thought would be interesting to know about the plants. 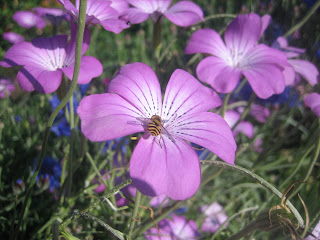 Corncockle ( Agrostemma githago): This is a native wildflower but very rare in the wild. The seeds can be sown where they are to flower in March or April and will flower from June/July onwards. The flowers will attract mostly hoverflies and some bees and look beautiful when waving on slender stems in a light breeze. All parts of the plant are poisonous including the seeds but as long as you don`t eat the plant (or the seeds) you should be alright. Corncockle, as a former arable weed, needs a sunny position and fertile well-drained soil to grow well. 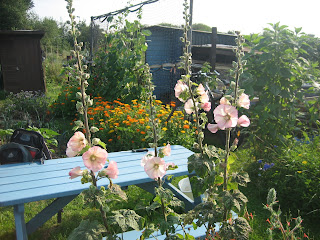 Hollyhock (Alcea rosea): A nice cottage garden plant which you often do not even have to sow as it colonises your plot by itself. It is a biennial or short-lived perennial plant which looks best next to a shed or in a flower bed. If it does not come on its own you can sow the seeds in spring where they are to flower. You have to wait a year for the flowers as the plant will grow leaves in the first year with the flower stalks to appear in the second year. Bees and bumblebees will visit the big flowers. 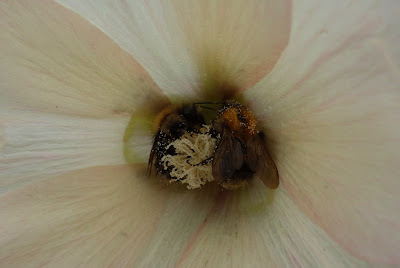 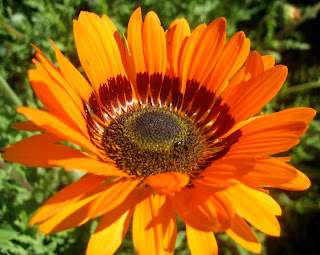 Cape daisy (Arctotis fastuosa): This is quite an unusual plant to have on your plot but has very attractive flowers and is very easy to grow. The plant comes from southern Africa and is adapted to dry soils so is a good choice in a dry summer. You sow the seeds in April/May after the last frosts where they are to flower. Once the seedlings emerge they grow quickly and will reach flowering size in July.
The flowers attract bees and hoverflies and are either bright orange or white. 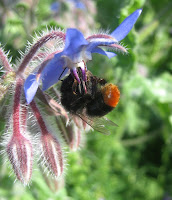 Borage (Borago officinalis): Borage is a very attractive plant for honeybees and bumblebees and has beautiful flowers which can be blue, white or pink. It is also very easy to grow. Sow the big seeds in April directly into the soil outside. Choose the location carefully; borage is quite a big and gangly plant and can smother neighbouring plants. It will also readily self-seed. Therefore it is best so sow the plants in a little wildlife area or unused corner of your plot. Borage will need a sunny position and a fertile soil, otherwise it will not do very well.
The leaves have a cucumber flavour and can be eaten when young (older leaves are quite prickly). The flowers are a nice addition in salads, soups and sandwiches. 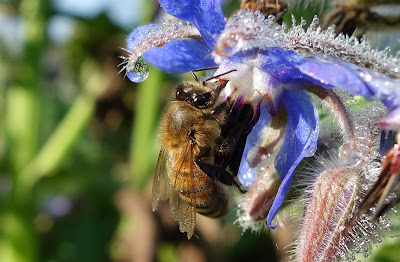 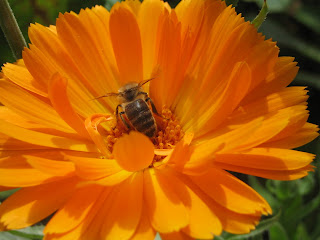 Pot marigold (Calendula officinalis): Pot marigold is a classic allotment and vegetable patch flower. You can grow the shorter varieties in between your vegetables to provide a splash of colour from July right until the first frosts in autumn. Sow the seeds where they are to flower in April and you can enjoy the first flowers at the end of June. The plant will readily self-seed but do not get annoying as they are easily hoed off.
Avoid double-flowered pot marigold as bees will not visit these flowers. Stick with single-flowered varieties and the bees will happily come to your plot. 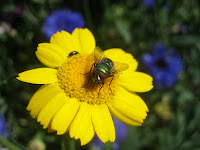 Corn marigold (Chrysanthemum segetum): Corn marigold is a native wildflower and colonises lime-free arable fields in Britain. It has cheery yellow daisy flowers which are best sown together with blue corn flowers (Centaurea cyanus) in full sun to give a nice contrast. The seeds can be sown in March or April and will flower from July onwards. Flies and hoverflies are especially attracted to these flowers.

Cosmos (Cosmos bipinnatus and Cosmos sulphureus): Cosmos is one of my favourite allotment plants and the flowers provide pollen and nectar for bees, bumblebees and butterflies in late summer and autumn. Cosmos bipinnatus is a tall plant, usually with pink, purple or white flowers and best grown at the back of the vegetable bed or in between taller vegetables. Cosmos sulphureus is smaller and has bright orange flowers. Both can be sown where they are to flower in mid -to late April but the seedlings should be covered with fleece if a sharp frost is forecast. Alternatively you can sow indoors in March and plant the young plants outside after the last frost in late April/May. Both Cosmos species need a sunny position. 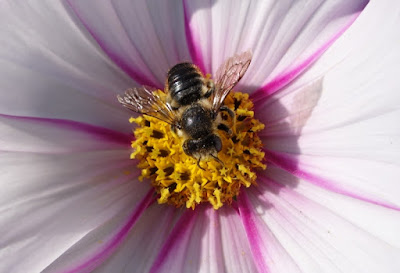 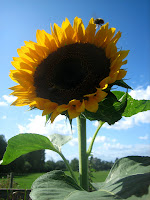 Sunflower (Helianthus annuus): Every allotment should have at least one sunflower as they are such impressive plants and the huge flowers are really attractive for bees and bumblebees. You can sow the big seeds straight into the soil outside in April or start them indoors in pots in March. Sunflowers need full sun and a fertile soil and as more you feed and water as taller your sunflowers will grow (if you have chosen to grow a tall variety such as `Russian Giant`). 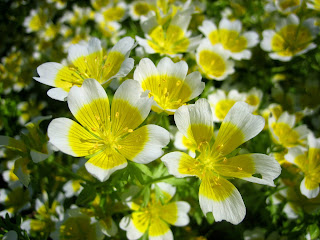 Poached-egg plant (Limnanthes douglasii): A really nice plant to cover the ground and protect the soil. It likes a sunny position and moist soil but will grow in any ordinary garden soil if it is not too dry.
Poached-egg plant is low-growing and a good choice to cover the soil around fruit bushes. It can be sown in March and flowers quite early in late May/June. Early hoverflies like the flowers and by planting poached-egg plant you can lure them to your plot.
The plant readily self-seeds and if you have sown it once you don`t have to sow it again. 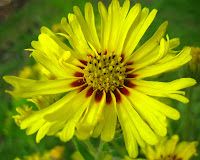 Common madia (Madia elegans): Another unusual plant for your allotment. Common madia is a native of western North America and grows in dry open places and on roadsides. Sow the seeds in April where they are to flower. The plant flowers  July - August and the bright yellow flowers will only open in the morning. There is one thing about the plant which is really special: the leaves have a scent of tropical fruit, so grow this plant near a seating area or somewhere you walk past often. 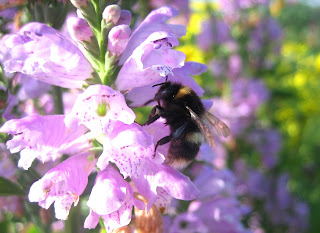 Obedient plant (Physostegia virginiana): This is a perennial plant so it is best you buy a young plant instead of sowing the seeds. Obedient plant is native to North America and likes fertile moist soil in sun or part-shade. Physostegia flowers from August to September and the pink tubular flowers are loved by bumblebees. There is something special about this plant as well: you can move the flowers in any direction without braking them off, once moved the flowers will stay in the new position without springing back in their original position. This is quite addictive  and you will soon find yourself moving the flowers of this plant around the flower stalk every time you visit your plot. 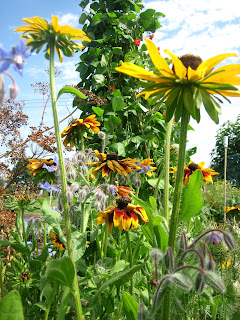 Black-eyed susan (Rudbeckia hirta): In contrast to perennial Rudbeckia`s commonly planted in gardens this is an annual plant which flowers in August and September if sown in April. Black-eyed susan is best sown indoors and grown on individually in pots until it is safe to plant it outside (after the last frosts in late April/May). It needs a sunny position and fertile soil and will quickly establish if the soil is not too dry. Bees and bumblebees like the flowers but I have also seen butterflies visiting.
There are varieties with pure yellow flowers and varieties with a mix of yellow and dark red flowers. I normally grow a mix of both and it is a good plant to provide pollen and nectar late in the season. You can grow the shorter varieties of black-eyed susan in between your vegetables or if you like the taller varieties more grow them together with other taller plants such as borage and cosmos. 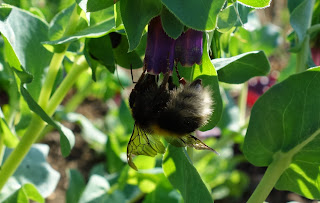 Honeywort (Cerinthe major): Honeywort is an upright annual plant and grows up to 60 cm tall. The blue-green leaves and tubular purple-yellow flowers look quite pretty and will attract mainly bumblebees. The plants need well drained ordinary soil in full sun. The large seeds can be sown in March or April outside (earlier when sowing indoors) and the first flowers will normally appear in June or early July. Honeywort self-seeds freely but the seedlings need to be overwintered in a cold greenhouse or cold frame as they will not survive cold winters. 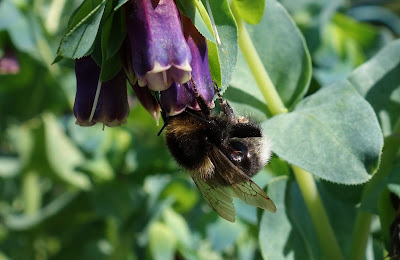 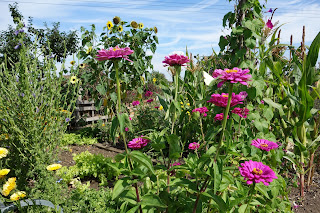 Zinnia: Zinnias are great plants for butterflies in late summer (avoid double-flowered Zinnias). They are easy to grow and can be sown either directly outside from May onwards or inside a greenhouse in early April. They are sturdy plants and stand upright whatever the weather throws at them. 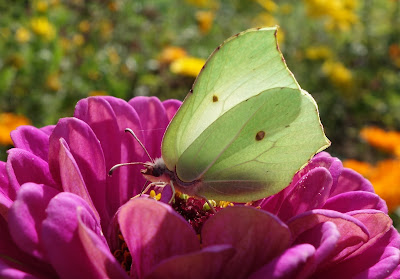 Phacelia (Phacelia tanacetifolia): A great plant for bumblebees and butterflies. Sow directly outside where you want it to grow. Also good ground-cover plants and green manure. 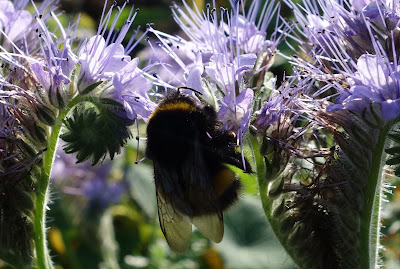 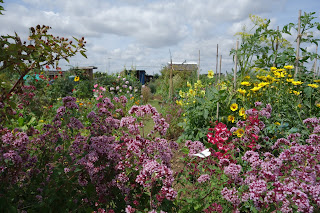 Wild marjoram (Origanum vulgare): Probably one of the best plants for pollinators. Great for bumblebees, hoverflies and butterflies. Needs sunshine and grows in any soil which does not get water-logged. 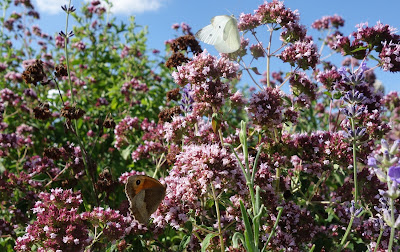 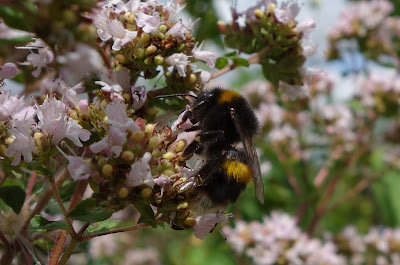 Lavender (Lavandula angustifolia): Great for bumblebees, butterflies and moths. Needs well-drained soil and sunshine for most of the day.


Other good allotment flowers are lemon marigold (Tagetes tenuifolia), nasturtium (Tropaeolum major) and royal mallow (Lavatera trimestris). All three can be sown in April where they are to flower and are visited by pollinators.

I hope I could give you some inspiration about what flowers to grow this year. Maybe you will even try one of the more unusual plants I mentioned. Once you have done the hard work of sowing and planting sit back and relax and enjoy your flower spectacle and all the pollinators you will attract to your plot.