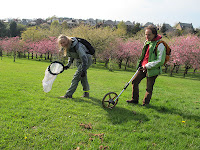 2013 is the third year of the Urban Pollinators Project and in the run up to our final field season this year now is a good time to update you on some of the fieldwork we’ve carried out in previous years and let you know about work in progress.

In the first year of the project (2011) we sampled urban areas, farmland and nature reserve sites across the UK from Dundee in the north to Southampton in the south to see how pollinator communities in urban areas compare to other habitats. Farmland makes up to 70 % of the UK land area while urban areas cover roughly 7 % of the UK.

Within each of our four study regions (Scotland, Northern England, Southern England, Western England/Wales) we selected 12 sets of farmland, nature reserve and urban sites, giving a total of 36 sites across the UK. Our teams carried out pollinator and plant surveys at each site between May and September 2011. At the end of the summer the field teams had sampled over 10 000 insects and had identified thousands of plants.

We are currently in the process of preparing the data for submission to a scientific journal and will provide a summary of the results as soon as the paper is accepted. So watch this space if you are interested in finding out more. 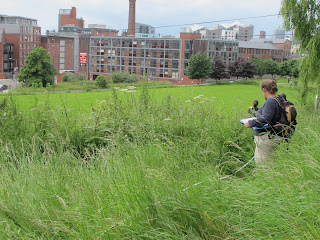 In the second year of the project (2012) we had a closer look at urban habitats to investigate where pollinators like to forage and what flowers they feed on. We concentrated on four cities/towns in the UK, namely Edinburgh and Leeds in the North, Bristol in the Southwest and Reading in the Southeast. In each of these areas we recorded pollinator activity and flowering plants in gardens, allotments, urban nature reserves, cemeteries & churchyards, parks and other public green spaces, on road verges, pavements and even in car parks. Pavements and car parks often seem to be a barren desert of concrete and tarmac but cracks in pavements or shrubs and trees in car parks can still provide floral resources for pollinators. Despite the wettest summer for 100 years we managed to be out and about in between the rain and to sample nearly 4000 insects.

The most challenging aspect of last year’s field season (beside the weather) was the garden sampling as we had to find 400 garden owners (100 per city) willing to let us into their gardens to sample pollinators. Luckily we found enough interested people, and in the end even had to refuse some garden owners because we had too many! We found that many gardens seemed to be attractive to pollinators, often with lots of pollinator-friendly flowers on offer. You cannot really do anything wrong if you plant single-flowered plants and if you avoid double flowered and highly bred plants. From our general observations cotoneaster, lavender, michaelmas daisies (Aster), bellflowers (Campanula), cranesbills (Geranium) and ox-eye daisies (Leucanthemum) were visited often by insect pollinators. Plants that were less visited were pansies, begonias, bedding geraniums, double flowered chrysanthemums and double flowered dahlia varieties such as the cactus dahlias. You can also leave some areas of your lawn a bit longer which will encourage pollinator-friendly wildflowers such as white clover, dandelions and buttercups.

Also have a look at our project newsletter:  http://www.bristol.ac.uk/biology/research/ecological/community/pollinators/news/2013/springnewsletter.pdf

Allotments were another good habitat for pollinators, and often had high numbers of insects recorded. We noticed that quite a lot of people like to grow some flowers in between their vegetables to attract pollinators and other beneficial insects. Fruit trees and soft fruit bushes such as apples, currants and gooseberries provide pollen and nectar in spring and are often important food sources for early emerging bumblebees and solitary bees.  A lot of vegetables such as beans, courgettes and pumpkins have flowers which provide pollen and nectar in summer. We also noticed that some ‘weeds’ appear to be very popular with pollinators, including dandelions, sow thistles and buttercups. Often allotments are surrounded by flowering hedgerows which offer an additional food source for pollinators. Long grass, often found under hedgerows or on abandoned plots, can provide nesting habitat for bumblebees and food plants for the larvae (caterpillars) of some butterflies such as meadow brown, gatekeeper, skipper and speckled wood.

If you want to plant some colourful pollinator friendly plants on your allotment this year have a look here:

To make your allotment plot more wildlife-friendly look here for some suggestions:
http://www.urbanpollinators.blogspot.co.uk/2012/10/a-wildlife-friendly-allotment-plot-and.html

Cemeteries and church yards can support good numbers of pollinators as well.  Some of the older sites were especially good, with diverse flower-rich meadows which were only cut a couple of times a year.

Although we recorded pollinators visiting flowers in other urban habitats such as parks and road verges we noticed that numbers of pollinators seen depended a lot on the cutting regime of the councils. For example, in spring some of the road verges in Reading were full of flowers. Daisies, dandelions, clovers and hawk`s- beards were the most common among these and provided a good food source for pollinators. But by summer the road verges had all been cut and were devoid of life.

Even habitats you’d think of being pollinator un-friendly, such as pavements and car parks, sometimes had flowers which attracted pollinators. Flowering weeds growing out of cracks and overhanging garden plants provide flowers along pavements.
Flower beds and flowering shrubs in car parks provide a splash of colour and can lure pollinators to an otherwise uninviting habitat. Common pollinator-friendly shrubs in car parks included boxleaf honeysuckle (Lonicera nitida), shrubby cinquefoil (Potentilla fruticosa) and cotoneaster.


And what are we up to this year (2013)? As last year was so incredibly wet which limited the amount of fieldwork we could do, we are planning to repeat the surveys of urban habitats this year to improve our dataset.

We will also survey the flower meadows we have sown in Edinburgh, Leeds, Bristol and Reading. To find more about our meadows have a look here: http://www.bristol.ac.uk/biology/research/ecological/community/pollinators/question3/


If you want to visit the meadows this year go between July and September as this is the best time to see them in full flower. To find the meadows in your local area please follow the link: http://www.bristol.ac.uk/biology/research/ecological/community/pollinators/urbanmeadows/flowermeadows.html