The secret life of the Red mason bee (Osmia bicornis) 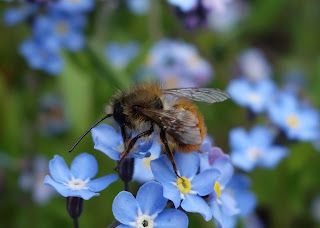 If you have provided nesting opportunities for solitary bees (commonly called ‘bee hotels’) in your garden you will probably see a hype of activity now with bees coming and going and busily flying in and out of the nesting holes. The solitary bee mostly seen using ‘bee hotels’ is the Red mason bee (Osmia bicornis, previously called Osmia rufa).

The males emerge first, as early as late March when the weather is warm enough, and often linger around the nesting holes to wait for the females to emerge. This normally happens a couple of weeks later and after mating the males will soon die. The females will start to build their nests, often using existing cavities such as holes in wood and walls, and will readily use ‘bee hotels’. The females are also able to excavate holes in soft or crumbling mortar joints.
The nest consists of a series of cells, each with a single egg and a food provision (pollen) separated by a layer of mud. The cells with the female eggs are at the back of the hole, the cells with the male eggs at the front. If you watch closely you can see the females transporting mud pellets to close each single nesting cell. They also collect pollen as food provision for the larvae which they transport underneath their abdomen.

The bees collect pollen from a large number of plant species and can often be found in flowering fruit trees. Red mason bee adults are normally active until June, but can sometimes still be seen in July.

If you do not already have a ‘bee hotel’ in your garden, have a look here for some ideas of how to build one. You can also buy one of the commercially available 'bee hotels'.

If you provide nesting opportunities for solitary bees you will also get better pollination of your fruit trees/bushes and flowers. And do not be afraid, the bees are completely harmless and will not sting even when you get really close.