The seven most common bumblebee species to find in gardens, parks and other urban habitats 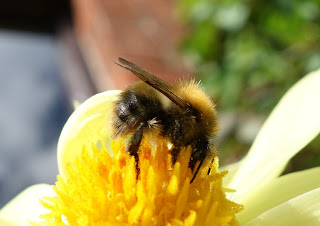 There are 25 species of bumblebees in the UK. Some are very rare and you will only find them in a few locations in the UK (such as Bombus distinguendus which only occurs in the Western Isles). Others are habitat specialists and are only found in habitats such as heathland, moorland, coastal areas or in limestone grassland. In urban habitats you mostly see quite common and wide-spread bumblebee species which take advantage of the flower-rich urban habitats such as gardens, parks and allotments and the good nesting opportunities.

If you want to learn more about bumblebee identification we can recommend the following book:
Field Guide to the Bumblebees of Great Britain & Ireland. Authors: Mike Edwards and Martin Jenner. ISBN: 978095497311

Below we have listed the seven bumblebee species we mostly encounter in the urban habitats we sample. Be aware that male and female (workers and queens) bumblebees of the same species can look different from each other and that some species can be confused with similar looking but often much rarer species. There are also the cuckoo bumblebees which often closely resemble their host bumblebee species. Read more about them here.

Bombus lapidarius (Red-tailed bumblebee):  Queens and workers have a black head, thorax and abdomen with an orange-red tail. Males have yellow facial hairs, thorax with yellow bands, black abdomen and an orange-red tail. Extent of yellow hairs in males can vary with some individuals having very little yellow banding. Large and robust species with a mid-length tongue. This species can be confused with rarer Bombus ruderarius, but look at the hairs fringing the pollen basket of female bees; Bombus lapidarius has black hairs, Bombus ruderarius orange hairs.


Bombus pratorum (Early bumblebee): Queens, workers and males have one yellow stripe on thorax and one on the abdomen followed by a black band and an orange tail. The male has very distinctive yellow facial hairs.
This is a small bumblebee species with a short tongue. Bombus lapidarius males look a bit similar but are a lot less yellow and larger with fewer yellow facial hairs. Some individuals, especially workers, can be very dark or almost black.

Bombus terrestris and B. lucorum (Buff-tailed and white-tailed bumblebee): Queens, workers and males have a single yellow stripe on front of thorax, one on the abdomen, followed by a black band and a white to dirty-white tail. Workers of both species are indistinguishable from each other in the field. Queens of Bombus terrestris have a dirty-white coloured tale while queens of Bombus lucorum have a white tale. Male Bombus terrestris have black facial hair while male Bombus lucorum have yellow facial hair. Both species are quite large and robust and have a short tongue.

Bombus hortorum (Garden bumblebee): Queens, workers and males have two yellow bands on the thorax, one on the abdomen followed by a black band and a white tail. This is a large and robust bumblebee species with a long face and very long tongue. Some individuals can be very dark to almost black but the tail normally remains white. This species can be confused with Bombus ruderatus which looks very similar but is much rarer. All-black individuals are normally always Bombus ruderatus.

Bombus hypnorum (Tree bumblebee): Probably the easiest bumblebee to identify as there is no other bumblebee species in the UK with the same colour pattern.
Queens, workers and males have a black head, tawny to dark brown thorax, black abdomen and white tail. This is a medium sized bumblebee species (workers are rather small) with a short tongue.
Bombus hypnorum likes to nest in bird boxes and tree holes and can often be found in gardens.

Bombus pascuorum (Common carder-bee): Queens, workers and males are almost entirely pale ginger-brown with variable patches of black hairs on  the abdomen. There are also distinct black hairs among the ginger-coloured ones on the thorax. A medium-sized species with a long tongue.

This species can be confused with rarer Bombus humilis and Bombus muscorum if black hairs are very reduced.