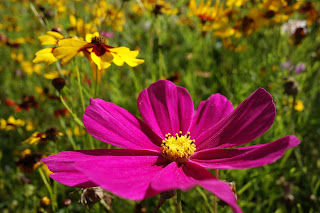 Most of the flower meadows in Reading have survived the heat wave in July but many have suffered and plants have flowered in a shorter period of time than they would normally do. Many of the meadows look like they are at the end of the flowering season now which is a bit of a shame as last year August and September were the months were our annual flower meadows looked best. 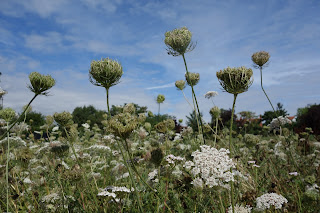 Perennial meadows: As the perennial meadows are exclusively consisting of native plants the flowering season is quite short and most of the perennial meadows in Reading have nearly finished flowering now. You can still see some Wild carrot (Daucus carota), Viper`s bugloss (Echium vulgare), Yarrow (Achillea millefolium) and Black knapweed (Centaurea nigra) and in our Portman Road meadow some Wild Marjoram (Origanum vulgare) flowering but the peak flowering time is over now. But even without many flowers the meadows still have their beauty as the bird`s nest-like seed heads of wild carrot look quite ornamental.

An abundance of insect live including many different pollinators are still enjoying the flowers and the shelter the meadows provide. Especially hoverflies are very fond of the wild carrot flower heads, bumblebees visit the last Viper`s bugloss flowers and butterflies enjoy the Wild marjoram. 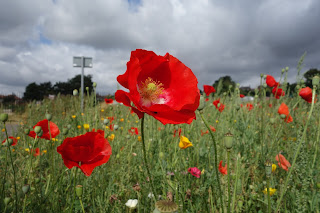 The annual meadow in Prospect Park is worth a look as it is dominated by yellow Cosmidium (Cosmidium burridgeanum) interspersed with pink Cosmos (Cosmos bipinnatus) and blue Cornflowers (Centaurea cyanus) which gives a lovely sight. Also the annual meadow in Henley Road Cemetery (Caversham Crematorium) is looking good and very colourful at the moment. The meadow in Christchurch Meadows has quite a lot of poppies flowering and the Victoria Recreation Ground meadow is, despite suffering a lot in the heat wave, still quite colourful.

Pollinators such as bumblebees, solitary bees, hoverflies and butterflies seem to like the colourful flowers and each time we visited we could see a buzz of activity. 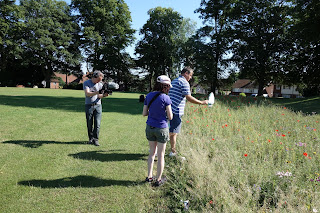 Earlier this month we were visited by Barry Gibb from the Wellcome Trust to film us, the meadows and the pollinators for a documentary about urban pollinators which was quite exciting.

The film is due to be released in Spring next year; we will keep you updated.


To find all of the meadows in Reading please follow this link. For more information about the meadows have a look here.
Posted by Reading team at 11:01