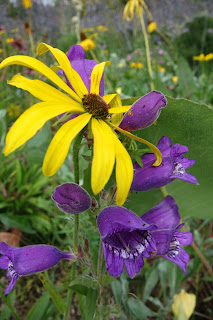 With our changing climate and the possibility of longer hot and dry periods in the near future we have to rethink the high maintenance and often unsustainable urban plantings such as large areas of bedding plants or huge herbaceous borders found in our parks and gardens. Also, wider environmental problems, including exhaustion of resources such as peat, water and petroleum, as well as the pollinator crisis that we are already facing will soon make many of these high-maintenance plantings unjustifiable.

One step forward is the creation of sustainable naturalistic urban plantings which, after initial establishment, require no additional irrigation, fertiliser, staking or other intensive management practices and which are based on scientific studies of ecological relationships of natural and designed plant communities. 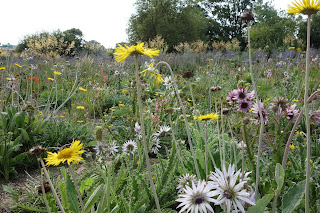 The Merton Borders at Oxford Botanic Garden represent a spectacular example for this new innovative method of urban planting. In collaboration with Professor James Hitchmough from the Department of Landscape at University of Sheffield, Oxford Botanic Garden have created a stunning area of 955 m2 covered by naturalistic and at the same time highly attractive ornamental planting which is based on natural plant communities from North America, South Africa and the Mediterranean. Most of the plants were established by direct sowing into a 75 mm layer of sand mulch used to suppress weed growth and to promote longevity of some of the sown species such as North American Penstemon. As many plants originate from seasonally dry grassland communities this type of planting is quite drought-resistant and can cope a lot better than traditional plantings with the long dry spells we are predicted to have more frequently in the near future, particularly in the Southeast of the UK. 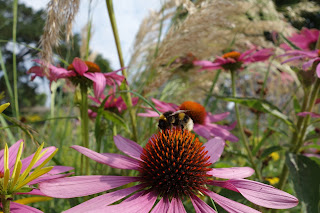 Another obvious benefit of these naturalistic plantings is that many of the species used provide an abundance of nectar and pollen for pollinators. When I visited the borders on a sunny day in late August, the area was buzzing with pollinators of all sorts; bumblebees (including this year’s new bumblebee queens that will soon be getting ready to overwinter), many different hoverflies, solitary bees and other pollinators were busily collecting pollen and nectar from many different plants irrespective of whether a plant originated from Africa, America or Europe.

If you happen to be in Oxford or live nearby, I suggest you go and visit the Merton wildflower borders. There is still time for doing so, as the borders will continue to look stunning well into autumn.

Below are some photos for you to enjoy and to whet your appetite to visit the borders yourself: