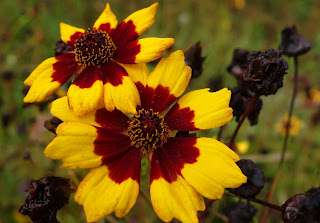 Autumn is upon us and the flower meadows are drawing to a close now. There are still a few flowers left which attract pollinators but apart from a few bumblebees, hoverflies and solitary bees there is not a lot flying around anymore with the colder nights getting more frequent now.

Update: We received the great news that Reading council will keep 11 out of the 15 wildflower meadows in Reading. Three of the perennial meadows will be maintained for the coming years and 8 of the annual meadows will be resown around Reading next year.


The perennial meadows have finished flowering (there are just a few flowers left here and there) but an abundance of seeds, especially of Wild carrot (Daucus carota), provides food for birds and other seed-eating animals. The meadows also provide shelter for insects and we have seen caterpillars, beetles and earwigs hiding in the birds nest-like seed heads of Wild carrot. Spiders use the meadows as a hunting ground and especially the Garden spider uses the tall plant stems to build its net to catch any passing insect. So even without lots of flowers the perennial meadows are still very in demand for all sorts of wildlife.

A highlight for us was to find the Ivy bee (Colletes hederae) in several of our meadows and watching it collecting nectar from yellow daisy flowers such as Autumn hawkbit (Scorzoneroides autumnalis) and Dandelion (Taraxacum agg.). The Ivy bee was first described in 1993 and was found for the first time in the UK (Dorset) in 2001. The bees are now slowly spreading North with one of the most northerly populations found near Abingdon in Oxfordshire. Read more about the Ivy bee here.


In October the perennial meadows will be cut to give the plants light and space to regrow ready to flower again next year.


After the annual meadows have suffered a lot in the heat wave in July they have finished flowering earlier than usual and most of the meadows look quite spent now. But there are still flowers left especially in our Prospect Park meadow which has lots of Cosmidium and Golden tickseed (Coreopsis tinctoria) flowering. We have also seen quite a lot of hoverflies in the annual meadows which seemed to be very fond of the poppy flowers.