The Ivy Bee (Colletes hederae) - a newcomer fond of Ivy 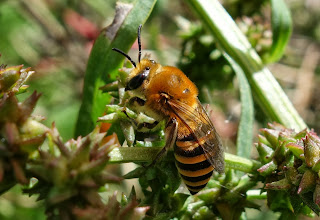 If you live in the South of England in an area with light soils and large stands of Ivy (Hedera helix) you may well get lucky and see the pretty Ivy Bee (Colletes hederae). The Ivy bee is a species of the plasterer bees (Colletes) and has quite a distinctive appearance with orange brown hair on the thorax and several orange brown hair bands on the abdomen. The bees are quite large (honeybee size or larger) with the female bees bigger than the males but otherwise looking the same. 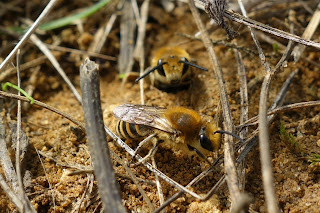 The Ivy Bee was first described as a distinctive species in 1993 in Southern Europe and has since then been found all over Central and Western Europe. In Britain the species was first recorded in 2001 in Dorset and can now be found all along the South coast, on the Channel Islands, Isle of Wight and further North in the Bristol, Reading and London area.  One of the most northerly populations at the moment is located near Abingdon in Oxfordshire.
Breaking news: The Ivy bee has now also been seen in South Staffordshire and Worcestershire. Have a look here for more information.
The adult bees emerge late in the year coinciding with the start of the flowering season of their main food plant (Ivy). The males normally emerge a little bit earlier from the end of August followed by the females starting to emerge from early September. They are usually on the wing until early November.
Ivy bees forage mainly on Ivy (Hedera helix and H. hibernica ) but if the flowers are scarce they will also forage on other plants, especially on yellow daisy flowers such as Autumn hawkbit (Scorzoneroides autumnalis), Dandelion (Taraxacum agg.) and Catsear (Hypochaeris radicata). But even if the adults can survive on nectar from other plant species the larvae are almost exclusively supplied with Ivy pollen.

The bees like to nest in light, often sandy soils with sparse vegetation such as south facing banks, soft-rock cliffs or even in front of south facing house walls. Despite of being a solitary bee they like to nest in dense aggregations sometimes numbering tens of thousands of bees.  The presence of large stands of old Ivy in the vicinity of the nesting sites is important for the success of this species.

During mating it can occur that emerging female bees get bounced upon by several males trying to mate which is called a copulation cluster. They often roll down the bank or cliff like a little ball and will disintegrate after hitting the bottom.
After mating the female bees start digging their underground nest (or reuse an old nest) which will contain the eggs in separate cells and a provision of Ivy pollen for the resulting larvae. The bees line the cells with a cellophane like plastic-material (hence the name plasterer bee) which makes the cells water-proof. The young larvae overwinter to grow on and pupate in the next year.

You can encourage the bees to forage and nest in your garden if you leave old stands of Ivy untouched and keep the vegetation short on south facing banks with light sandy soil.

If you find Ivy bees nesting or foraging in your area please let the Bees, Wasps and Ants Recording Society (BWARS) know as they map the distribution of this species. You can submit your sighting here. 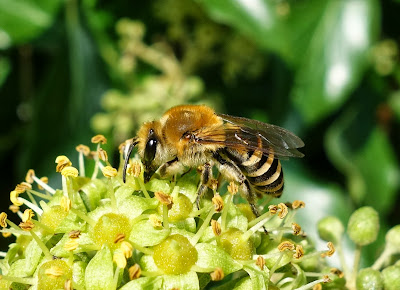 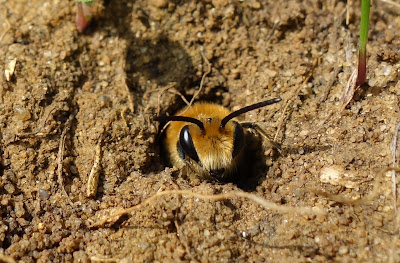 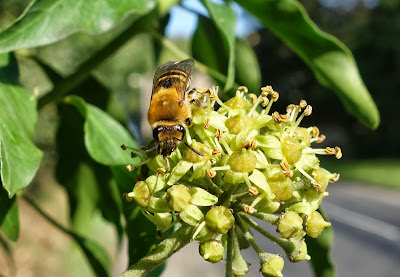