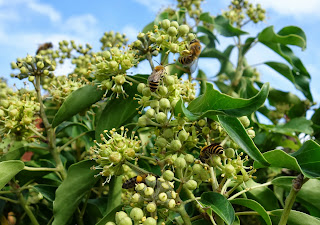 Not many native plants flower in autumn but Ivy (Hedera helix and the very similar species Hedera hibernica) is an exception and provides an abundance of pollen and nectar for late-flying bees, wasps, butterflies and hoverflies.
Ivy is an evergreen climbing or creeping woody plant native to the UK. The plant either scrambles over the ground or clings with the help of aerial roots to many natural or man-made surfaces such as tree stems, rocks, garden walls, fences or house walls and can climb up to 20 m above ground. Ivy grows rapidly with long flexible stems when young and only produces flowers after about 8 to 10 years.  The leave shape will change from palmately lobed in young plants to oval shaped in mature plants. Mature plants will also stop climbing and concentrate on flowering instead. The nectar-rich flowers will appear in small clusters on mature plants in September and October and are quite small and inconspicuous with a greenish-yellow colour.

The fruit is greenish-black to dark purple and will ripen during winter to early spring and is eaten by a range of birds such as thrushes, blackcaps and woodpigeons. Ivy is also an important food plant for some butterfly and moth larvae such as Holly blue, Small dusty wave, Angle shades and Swallow-tailed moth.
Ivy is common and abundant in urban as well as in rural areas but often with a higher Ivy density in urban areas as it is frequently planted in gardens along fences, walls and other boundaries, as a hedge or as ground-cover plant. Ivy will grow in almost any garden soil as long as it is not water-logged and grows well in sun or shade. 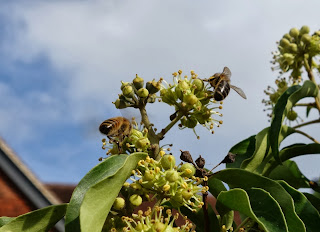 If you walk past flowering Ivy you will often hear a loud buzzing sound produced by great numbers of pollinators visiting the flowers. For honeybees, Ivy flowers are the most important food source in autumn and in a study on the importance of Ivy for late-flying pollinators 89 % of the pollen pellets collected in September and October were from Ivy flowers. The sugar-rich nectar seemed to be an even greater target as 80% of honeybees observed on Ivy flowers were only foraging for nectar. Other pollinators which visit Ivy flowers are wasps, bumblebees, Ivy bees, flies especially hoverflies and butterflies (mainly Red admiral).


Ivy bees (Colletes hederae) are dependent on Ivy pollen to feed to their larvae and have adjusted their whole life cycle to the flowering season of Ivy. Read more about this interesting bee here. You can also watch this video: Observations at a large Ivy bee (Collletes hederae) nesting aggregation

To help late-flying pollinators let Ivy flower in your garden. You can also plant more Ivy which will provide much needed nectar and pollen in future years. Ivy is not as damaging to trees and house walls as often believed and can even have benefits in the insulation of buildings and the reduction of pollution in urban areas. 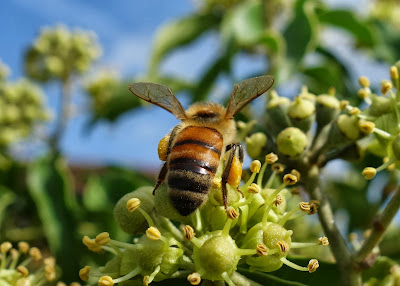 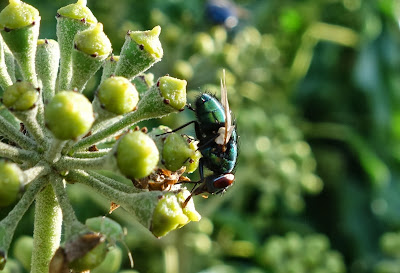 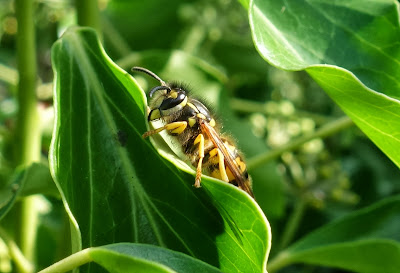