Late pollinators still out and about 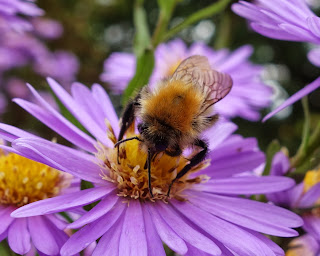 It was a really good year for pollinators so far with a hot and dry summer and a mild autumn. Bumblebee queens need to drink a lot of nectar before it gets cold so they have a better chance to survive winter. Workers of the Common carder bumblebee (Bombus pascuorum) are also out and about and are one of the last bumblebees you will see visiting late flowers such as Michaelmas daisies (Aster spp.), perennial sunflowers (Helianthus spp.) and single-flowered Dahlias (Dahlia x hybrida)  in autumn.
Buff-tailed bumblebees (Bombus terrestris) often keep going through winter in urban habitats in the South so you will see them flying around as well. Honeybees, which will overwinter as a colony, are collecting pollen and nectar on mild days to fill up their stores before winter sets in. Ivy bees (Colletes hederae), wasps and late-flying butterflies such as Red Admiral frequent Ivy flowers and the last hoverflies are busy drinking nectar from many different late-flowering garden plants.
If you wonder what all these pollinators will do in winter have a look here.