If you are looking for garden plants which are attractive, easy to care for and good for pollinators have a look at our suggestions below.  Now is also a good time to plant new additions to your garden as it is less hot than in summer but the soil is still warm which helps with speedy establishment of the root system. Some of the plants mentioned are better sown/planted in spring such as Cosmos, sunflower and Dahlia.
For more ideas of late-flowering plants for your garden have a look here. 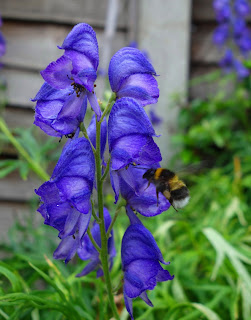 Plant in sun or partial shade in soil that never dries out in summer. Grows best in fertile moist soil.
Monkshood dislikes hot dry summers so will do well in Northern parts of the UK.
All parts of the plant are poisonous so always wash your hands after handling it or wear gloves. 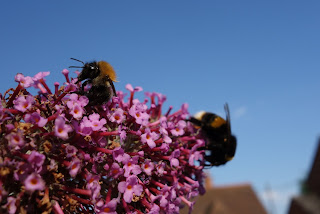 Grow in rather poor well-drained soil in full sun for the best flower display. Can cope well with dry soils once established. Buddleia needs to be pruned hard in early spring to keep it compact.
Butterflies and bumblebees love the flowers. 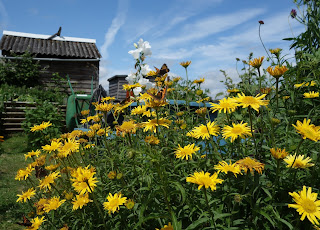 Grow in any normal, well-drained garden soil in full sun. Can also be planted in poor and stony soils and is quite drought resistant once established.
The cheerful yellow daisy flowers attract an array of pollinators from bees and butterflies to hoverflies and beetles. 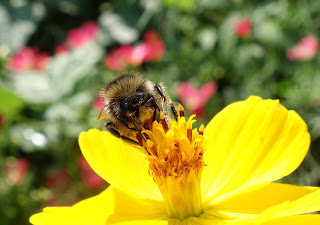 Best sown direct in late spring after the last frost as the seedlings are not frost hardy. Can also  be sown earlier in spring into modules in a greenhouse or on a windowsill.
Cosmos likes moist fertile soil in full sun.
Also try the taller Cosmos bipinnatus which has pink or white flowers. 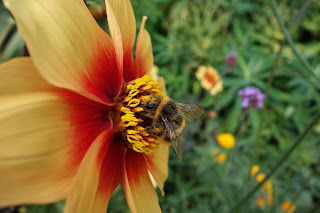 Only the single flowered Dahlia varieties such as the Bishop dahlias are suitable for pollinators. Plant the tubers in spring after the last frost in fertile, well-drained soil in full sun. After the first frost in autumn has blackened the leaves cut the foliage down to the ground, dig the tubers out and overwinter them in a box with newspaper or sand in a cool frost-free place. 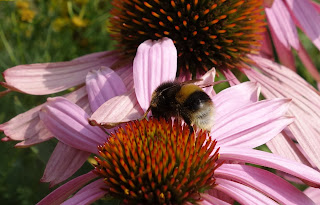 Coneflower needs to be planted in well-drained soil that never becomes water-logged in winter. It will do best in full sun and is quite undemanding if the conditions are right.
Coneflowers also look nice if planted in a more informal style with grasses and other prairie plants such as Rudbeckia. 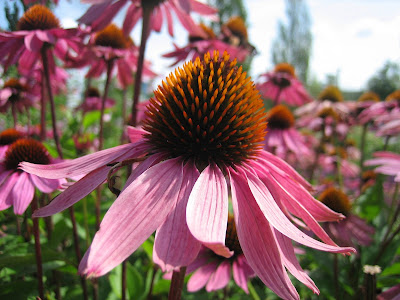 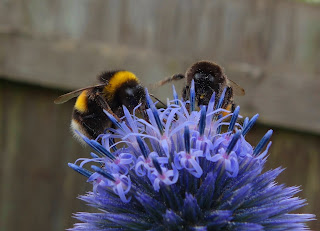 Grow in full sun in well-drained, rather poor (can also be stony) soil. Globe thistle will tolerate normal garden soil and partial shade. Once established it is quite drought tolerant and will thrive in hot and dry summers. 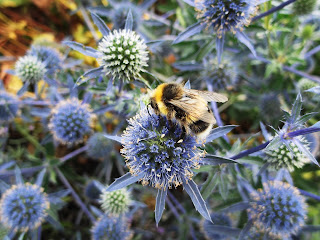 Grow in well-drained, rather poor soil in full sun. Very drought resistant once established and will thrive in hot dry summers. Will do well on exposed sites and near the sea. 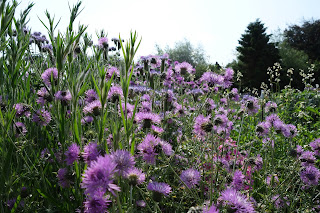 A plant from the Mediterranean with variegated thistle-like foliage and pretty pink (or white) flowers. Sow in spring where it is to flower in full sun on well-drained soil which can be poor (but will also grow in normal garden soil). Copes well with dry soils once established and self-seeds prolifically. 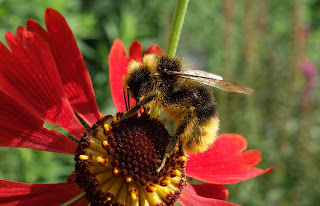 Common Sneezeweed likes to grow in full sun and needs moist fertile soil which can be enriched with manure every spring. The plants may have to be staked as they can grow quite tall. 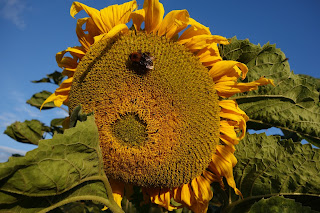 Sow the seeds outside in spring after the last frost or sow inside in pots on a windowsill or in the greenhouse. To grow really tall sunflowers you need lots of sun and fertile moist soil. Bumblebees love the flowers and the seeds are a good winter food for birds. 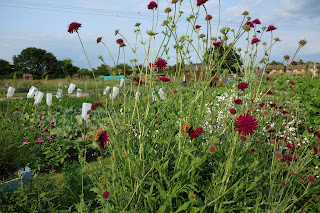 A very undemanding and easy to care for plant which grows in any normal garden soil in full sun or partial shade. As it grows quite tall it will need some staking. Butterflies and bumblebees like the dark-crimson pompom-like flowers. 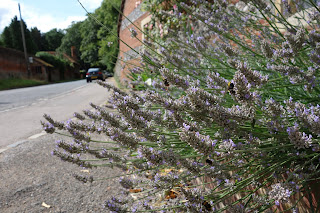 Probably one of the best plants for pollinators, lavender needs a place in full sun on rather poor well-drained soil. Once established it is quite drought resistant. Bumblebees literally flock to the flowers in summer and it is not unusual to see 30 or more bees at one time in a big lavender plant.

To keep the plant compact and bushy prune it back after flowering finishes but do not prune into old wood. 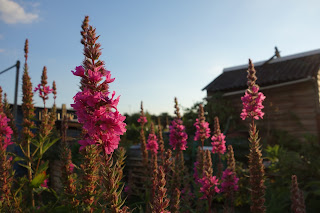 A great plant for moist or permanently wet soil which grows also well at the margin of a pond. Ideally plant in full sun but Purple loosestrife will tolerate partial shade as well. Once the first flush of flowers has finished cut back the spend flowers just above where a side bud is forming and you will soon be rewarded with a second flush of flowers. 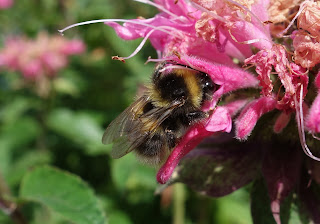 Grow in moderately fertile, moist but not water-logged soil in sun or partial shade. The leaves are aromatic and can be used to cheer up summer salads or to flavour chicken and fish dishes. 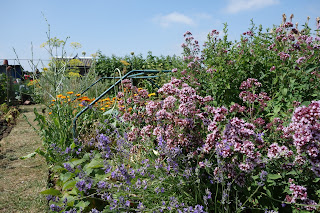 Wild marjoram is a great plant for pollinators and attracts mostly bees and butterflies. It wants a sunny place on well-drained soil which can be rather poor but Wild marjoram will also grow well in any normal garden soil. The leaves are aromatic and can be used to flavour dishes especially from the Mediterranean cuisine. 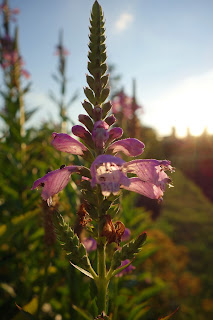 Grow in moist fertile soil in full sun but will tolerate a little shade and normal garden soil as well. If conditions are right the Obedient plant can spread quite aggressively so keep an eye on it and restrict the spreading if necessary.

This plant is called obedient plant because the flowers can be moved around the stem and will hold the position you have moved them into. 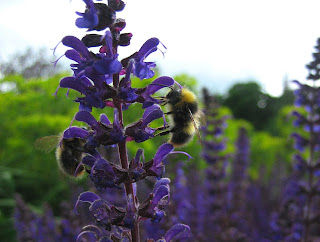 Grow in well-drained fertile soil in full sun to partial shade. Once the first flush of flowers has finished cut back the spend flowers to just above where the side buds are forming and the plant will continue flowering. Bumblebees like the blue labiate flowers. 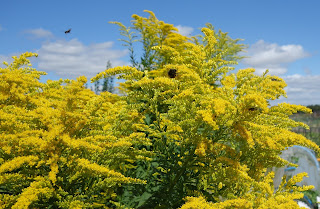 Grow in any well-drained garden soil in full sun to partial shade. The numerous tiny yellow flowers are highly attractive to bees and hoverflies. 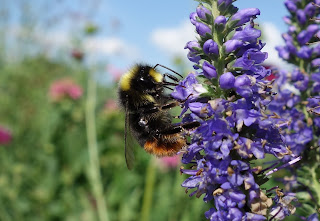 A great easy to care for plant to attract bumblebees and butterflies to the garden.
Garden speedwell grows well in any well-drained garden soil in full sun or partial shade. 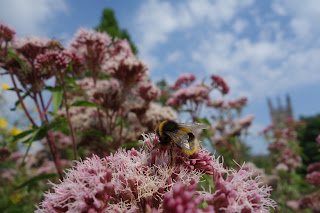 A very impressive plant as it can grow to a height of 2.5m so best planted at the back of a border. Grows in moist fertile soil in full sun to partial shade. The pink flowers are great for butterflies and provide an abundance of nectar. Bumblebees also like to visit the flowers.
Posted by Reading team at 09:47