A year on a wildlife-friendly allotment plot 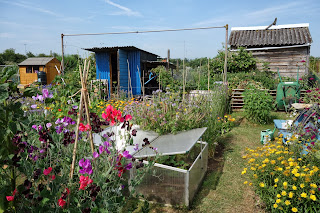 Allotments can be great places for wildlife especially when planted and maintained in a wildlife-friendly way. If you use no pesticides, plant pollinator-friendly flowers in between your vegetables or in a dedicated flower bed, have fruit trees and bushes, a herb bed, a compost heap and a little pond, some green manure and if you do regular mulching you are already providing a great habitat for all sorts of wildlife such as pollinators and other insects, spiders, frogs, toads and small mammals. You will also soon realise that you have a lot less problems with pests such as aphids and caterpillars as their natural enemies such as ground beetles and wasps will thrive in a habitat with lots of food, places to hide and no pesticides sprayed.

To get an impression of how a small productive plot can also be a great place for wildlife come with me on a journey through the seasons on my allotment plot in Wallingford which does not only produce a great amount of fruit and veg but also has a lot to offer for pollinators and other wildlife.

You can also watch the two allotment videos I recently made to see how my allotment looks now and to get more ideas of how to make your plot more wildlife-friendly.


My wildlife-friendly allotment in June/July 2015

Lots of snow and it looks like as if not much is happening. But looking on the ground there are quite a lot of different animal tracks to see, from cat and fox tracks to rabbits, rats, mice and bird tracks. So there is actually a lot going on in January and February, just not when we are there. 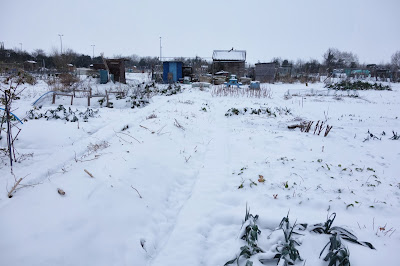 
More snow and this time unwelcome one. Everything is still cold and frozen and early spring flowers such as the daffodils look quite sorry for themselves in the snow. It is still too cold for the first pollinators to emerge or to start any sowing of flowers or vegetables outside. 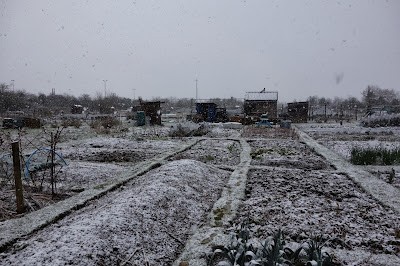 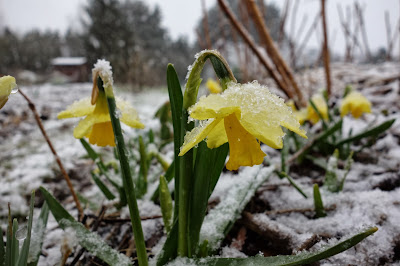 
Finally spring arrives and the first pollinators start to emerge. Big bumblebee queens (mostly Buff-tailed bumblebee Bombus terrestris) frequent the crocus flowers while little solitary bees (Andrena) and hoverflies (Eristalis) favour the wild tulips I have planted. The bumblebee queens are hungry after their long hibernation and will first fill their stomach with nectar from spring flowers before starting to search for nesting sites.


Slowly it is getting warmer and the strawberries, gooseberries and black currants are starting to flower. A huge Red-tailed bumblebee queen (Bombus lapidarius) is visiting the nectar-rich gooseberry flowers on sunny days. Soon she will start to build a nest probably somewhere on the allotment site or in nearby gardens. Red-tailed bumblebee queens build their nest underground preferably at the base of walls or under piles of stones. 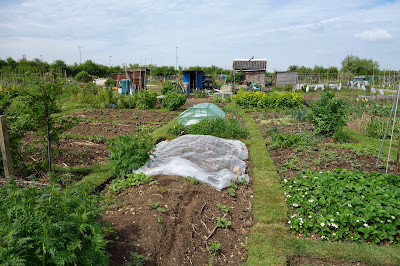 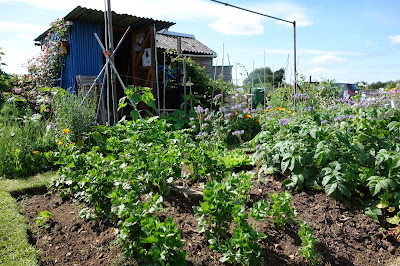 Everything is looking lush and green now. Lots of plants are starting to flower and especially the Milk thistle (Galactites tomentosa) seems to have spread considerably compared to last year. The Phacelia (Phacelia tanacetifolia) I have sown back in April is starting to flower and attracts an abundance of bumblebees. The two bee hotels at the shed wall are visited by quite a lot of Mason bees (Osmia bicornis) this year, a lot more than last year. I like watching them busily flying back and forth carrying pollen and little pellets of mud.

June is also the time the Small tortoiseshell butterflies emerge. I count 6 adults which especially like to visit the Yellow ox-eye (Buphtalmum salicifolium)  and the Red scabious (Knautia macedonica) I planted in a little flower bed next to the picnic bench.

I also find a bumblebee nest entrance hole just opposite my composting area and watch bumblebee workers (Bombus terrestris/lucorum) busily flying in and out all day. I have planted a Harebell (Campanula rotundifolia) in a little rock garden behind the picnic bench 2 years ago. Every year in June when the flowers are opening the plant is a hotspot for the tiny Harebell carpenter bee (Chelostoma campanularum). Male and female bees are swarming around the flowers on warm and sunny days and after they have mated in the flowers the female bees will build nests in little holes in wooden fences and sheds nearby.


After the cold spring and early summer July finally brings us sunny and very warm (often even hot) weather. The downside is that there is also hardly any rain and from mid-July onwards the grass turns brown and some of the flowers and vegetables start to suffer. Pollinators thrive in the sunny and warm weather and countless bumblebees, solitary bees and hoverflies visit the many different flowers on my allotment.


My little annual flower meadow did really well so far but is now starting to deteriorate due to the heat and water shortage. But the flowers still attract many pollinators and especially the poppies (Californian poppy and English poppy) are popular with bumblebees and hoverflies. Butterflies, especially Meadow brown, Gate keeper and Small white are abundant and the first bumblebee males start to appear which is always a sign that a bumblebee colony is nearing the end of its live.

In July and August the old bumblebee queens which have produced bumblebee workers all summer start to produce bumblebee males and new queens instead as they run out of sperm to fertilise the eggs. The males normally hatch first and often get evicted from the colony and have to fend for themselves. You can often see them lingering around on flowers and even spending the night safely tucked away between the petals. Shortly after the males leave the nest the young queens hatch and leave the nest to mate and to forage for food. The young queens, unlike the males, will return to the nest for shelter but will not add to  the existing nest provisions 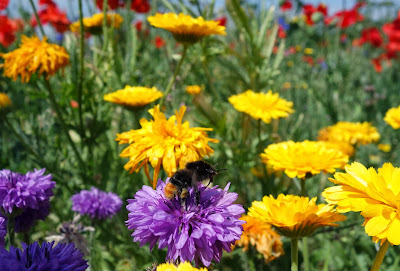 One highlight of July was the Wild marjoram (Origanum vulgare) starting to flower. The pretty pink flowers attracted an incredible amount of bumblebees and butterflies and the plant was a hotspot of pollinator activity on my allotment for several weeks.

Also not as attractive to pollinators as the Wild marjoram, the many different sunflowers I had sown back in April which now started to flower were visited by bumblebees with often several of them on one flower head. I also discovered that the Small tortoiseshells had been busy lying eggs in the little nettle patch surrounding my compost area. I watched probably a hundred or more caterpillars busily munching the nettle leaves until hardly any leaves were left. Then from one week to the next they all suddenly disappeared, probably pupating on vegetation nearby. 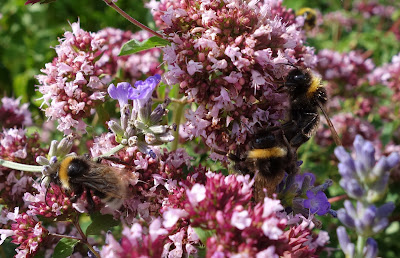 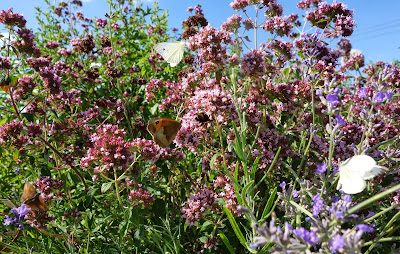 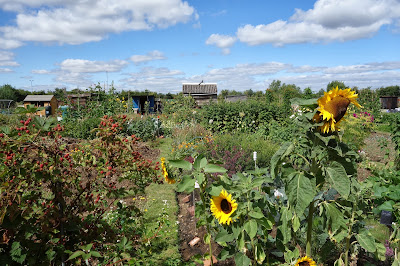 It is still quite dry and warm and the blackberries and autumn raspberries are starting to ripen. I am seeing a lot more hoverflies now which normally emerge in great numbers in August and September.

The last comfrey is flowering and attracts long-tongue bumblebees (such as Bombus hortorum) which are able to access the long flower tubes. Short-tongue bumblebees such as Buff-tailed bumblebees (Bombus terrestris) like to visit the nectar-rich flowers as well but they are not able to access the flowers the normal way but bite a little hole at the base of the flower tube to get to the nectar located close by.
The same can happen to runner bean flowers. If you find little holes near the base of your runner bean flowers you will know that nectar thieves were at work and that your flowers did not get pollinated. Read more about nectar-thieves here.

Wasps are starting to make more of an appearance in August drinking nectar from fennel and other similar easily accessible flowers such as dill and parsnip. Wasps are quite useful on an allotment plot as they will hunt for aphids, caterpillars and other pest insects all summer to feed their larvae which are keen meat eaters and always hungry. Wasps only get annoying when the colony starts dying in late summer and autumn and worker wasps have no larvae to care for anymore.
Late summer flowers such as Cosmos (Cosmos bipinnatus and C. sulphureus) and Obedient plant (Physostegia virginiana) start flowering and provide a welcome feast for pollinators. 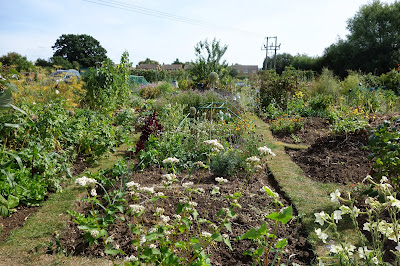 Again a warm and quite sunny month and lots of pollinators are still out and about. The Borage which seeded itself around on my plot is showing off its pretty blue star-like flowers which seem to be irresistible to Common carder bees (Bombus pascuorum). They are normally the latest bumblebees flying and you can often still see them in October.

The orange flowers of Pot marigold glow in the early autumn sunshine and look pretty planted together with Borage. Pot marigold is one of those plants which you only have to sow once. They seed themselves around happily and are easily removed if growing in the wrong place. The first flowers normally appear in May or June and the plants will flower right until the first sharp frosts in November. Bees and hoverflies like to visit the flowers so it is well worth planting on your plot.

My second sowing of Phacelia (sown back at the beginning of August) is blooming now and bumblebees flock to the pretty blue flowers. Even hoverflies which are still abundant visit the flowers. 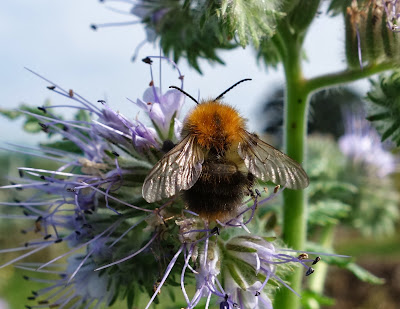 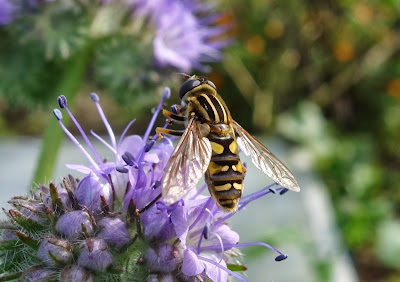 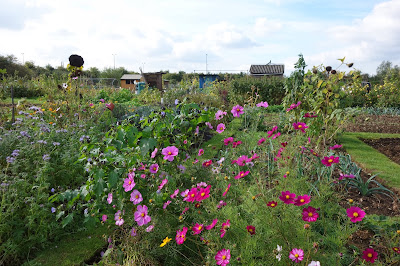 The days are getting shorter and the nights colder. Late pollinators are still busy, using any sunny and warm day to forage for pollen and nectar. Cosmos, Phacelia, Pot marigold and Shoo-fly plant (Nicandra physalodes) are among the plants still flowering; many of them will flower until the first frosts. The bee hotel is well occupied with many tubes accommodating mason bee nests. After the larvae munched their way through the stored pollen provisions all summer they have now pupated.
Common carder bumblebees and hoverflies (especially Eristalis) are still a common sight.


I am also seeing several young bumblebee queens visiting Cosmos, Fly-shoo plant and Phaeclia on my plot on sunny days. The young queens need to drink as much nectar as possible to build up their fat body and fill their honey-stomach before they go into hibernation. They will probably hibernate under the hedge surrounding the allotment site or in another sheltered location somewhere nearby.

The sunflowers I have planted have finished flowering now but the sunflower seeds attract birds from the surrounding countryside. I have also a very friendly robin visiting my plot regularly and watching me while I dig the beds or do some weeding. Every now and again he flies down from his perch and picks some unlucky worm or insect I have disturbed. 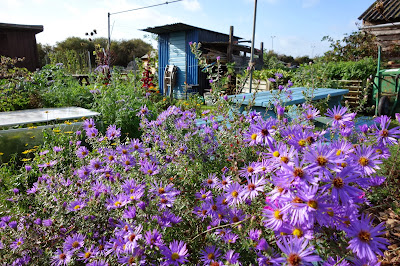 November is still quite mild and the Michaelmas daisy near the picnic bench is one of the last plants flowering on my allotment. The Harebell has started to flower again back in September and the last flowers are still clinging on and braving the first frosts. December brings some beautiful hoar frost covering everything with a layer of ice crystals. I have taken over another half allotment and I am busy digging the weedy plot. My little friend the robin is back, watching and waiting for worms and insects which he quickly picks from the ground as soon as he spots them.

As I have seen a frog on my allotment this summer I decide to build a little pond so he can have a bath or even breed if he finds a mate. I have planted some Marsh marigold (Caltha palustris), Water forget-me-not (Myosotis scorpioides) and Mare`s tail (Hippurus vulgaris) in the pond and Ragged robin (Lychnis flos-cuculi) and Yellow monkey flower (Mimulus luteus) around the edge.

The year is closing, pollinator activity has ceased and dormant plants and seeds are waiting for warmer weather and longer days to burst into new life. Soon it will be spring and the cycle will start again.