The rise and fall of a White-tailed bumblebee colony 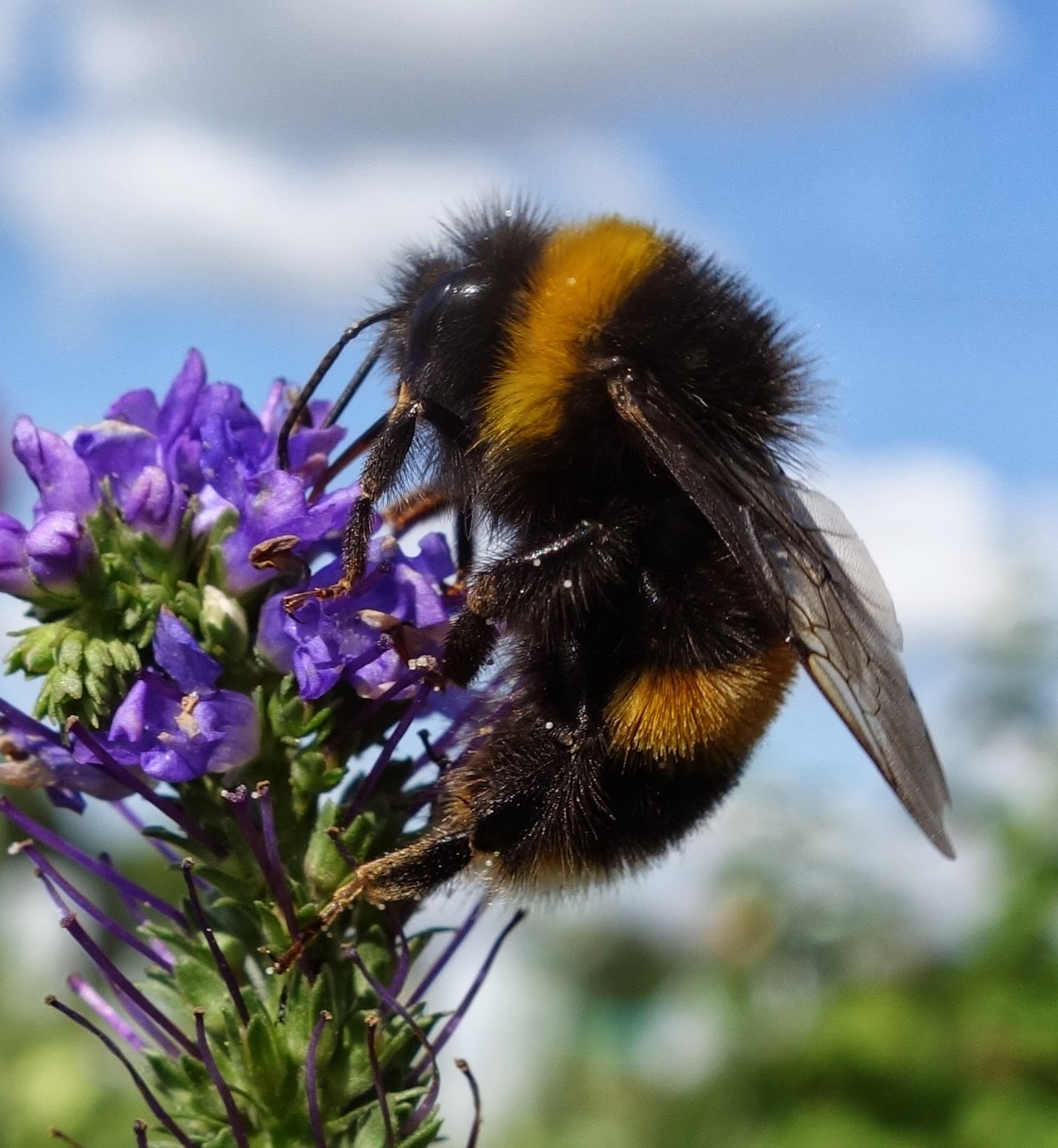 On a mild day at the beginning of March the White-tailed bumblebee queen (Bombus lucorum) emerges from hibernation. She has slept buried in the soil under the hedge since last autumn and is now very hungry. The sun is shining and early spring flowers such as Crocuses, Winter aconites, Lesser celandine (Ficaria verna) and Snowdrops have opened their flowers. The queen has soon found a nice patch of crocus flowers on a nearby allotment site and is now eagerly drinking the nectar hidden at the bottom of the flowers.
She finds more early spring flowers in the surrounding gardens and after a few days of feeding she feels revived and ready to search for a suitable nesting site.

The allotment site looks promising so she flies low over the ground along the surrounding hedge, along paths and over plots with rough grass to look for old abandoned mouse nests, her favourite nesting places. She finds an interesting hole in the ground and lands for a closer inspection. But no, the location is too shady so up she flies again looking for a better nesting site. Some more suitable nesting places she finds are already occupied by Buff-tailed bumblebee queens (Bombus terrestris) and as they are much bigger than her she will not risk a fight.
Finally, after a few days of searching, she has found what she was looking for; a nice old roomy mouse nest on a south-facing grassy bank. She inspects the hole carefully and after a while takes up residence.
Now she needs more nectar and pollen so she can start building her nest. The queen flies busily back and forth between nearby patches of early spring flowers and her nest and brings back great amounts of pollen and nectar. The nectar she stores in a wax pot she built herself (she secretes the wax from her body) and forms a small mount with the pollen.
When the queen has collected enough nectar and pollen she starts to lay her first eggs on the mount of pollen which she covers which a layer of wax. She now needs to keep the eggs warm so clambers on her nest and starts shivering her muscles to produce body heat. From time to time when she feels hungry she sips nectar from her wax pot. If the queen is running out of nectar she has to leave her nest to collect more but as her brood will cool down when she is not in the nest she has to be quick. Luckily there are big patches of spring flowers nearby so she has not to fly far.

The little white grub-like larvae hatch after several days and the queen feeds them with nectar and pollen she collects near the nest. After about 2 weeks the larvae have grown considerably and are spinning a cocoon in which they develop into adult bees.

The queen’s first offspring will all be workers which will help her in the nest, raise the next batch of workers, guard the nest entrance and go foraging for nectar and pollen. To create workers the queen releases a pheromone which signals the larvae to develop into worker bumblebees. As soon as the first workers have hatched the queen will stay inside the nest (this is much safer than to go foraging herself) and concentrates on laying more eggs.

It is a warm spring and early summer and the colony, surrounded by many pollinator-friendly flowers, is growing and growing. The nest contains now more than 200 workers and is a hive of activity. The bigger worker bumblebees have the task of foraging for nectar and pollen or guarding the nest entrance while the smaller workers help the queen to feed the larvae and keep the nest warm and clean.

It is now mid-summer and the old queen in our White-tailed bumblebee colony is getting weaker. She stops to produce the pheromone which signals the larvae to develop into worker bumblebees and all the eggs formerly destined to become worker bumblebees will now develop into new queens. The queen larvae will consume more food and grow a lot larger than the worker larvae so it is putting quite a strain on the resources of the colony to raise new queens. The queen is also running out of sperm with which she has fertilised all her previous eggs (fertilised eggs always develop into females) and now lays another batch of eggs which she does not fertilise. These eggs will develop into males.

The remaining workers will help the queen to raise the last offspring but as the queen gets weaker she starts losing control over her daughters which will subsequently become more unruly and disobedient. Whereas previously the queen maintained a strict command over her workers she can now not prevent her daughters from laying eggs themselves (all worker bumblebees are fertile so can theoretically lay eggs). Eggs produced by workers will always develop into males as worker bumblebees have never mated with a male. But fortunately for the queen only a few of her daughters eggs will hatch into adult males, so most males produced in the colony are still her own sons.

In late summer the young queens hatch and leave the nest to look for mating partners. They will still come back to the safety of the nest each night but often forage for themselves during the day. The males have hatched as well and after a few days in the nest, drinking from the stored nectar but otherwise doing nothing to help with the nest routine, leave the nest for good. They now spend the rest of their lives looking for a young queen to mate with.
To find the queens they often patrol along a certain route, often in tree tops (different bumblebee species patrol at different heights); scent-marking prominent objects along the way such as tree trunks with pheromone. In the rare cases a young queen comes along they mate with the often much larger queen, clinging to her back and after transferring the sperm sealing her genital opening with a plug so that she cannot mate with another male. As there are more males produced than new queens many males never get a chance to mate so they just hang around on flowers and drink nectar until they die.

After the young queens have mated they will concentrate on drinking a lot of nectar to fill their honey stomach and to build up their body fat. It is crucial for the young queens to find enough food before colder weather sets in to be able to survive hibernation.


In the meantime back at the nest the old queen dies together with the last of the workers. The nest lies empty and will not be reused by the young queens in the next year; they will always build a new nest to avoid a build-up of pest infestations.

If you are interested in further reading about bumblebees I can recommend the book “A Sting in the Tale” by Dave Goulson. This book is not only a great way to learn more about bumblebees and the most recent bumblebee research but it is also hugely entertaining and a real page-turner.