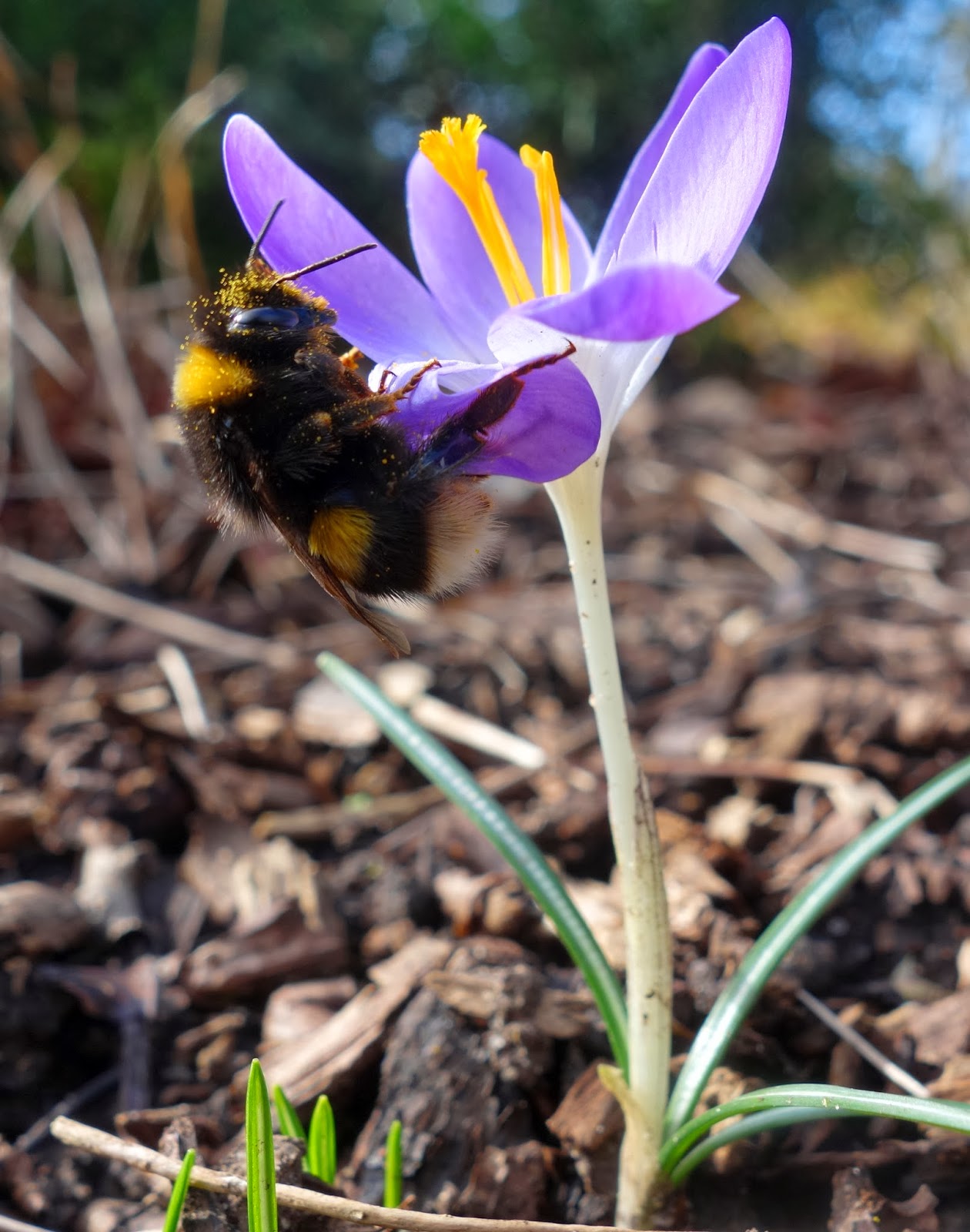 The days are getting longer now and the first bumblebee queens make an appearance. They emerge from their long sleep to fill their stomach with nectar from early spring flowers before searching for a suitable nesting site. Queens are a lot bigger than bumblebee workers so should be easy to recognise. Also nearly all bumblebees you see at the moment will be queens (see Buff-tailed bumblebee below for an exception). At first you will see the queens drinking a lot of nectar to regain energy. Later you can watch them flying up and down your garden, along hedgerows and walls, around sheds or over grassland in search for a nesting site, often landing at holes or depressions in the ground to inspect them. Once they have found a nesting place the queens will start collecting pollen as well as nectar; so if you see a queen carrying a pollen load you will know she is already provisioning a nest. Once the queens have successfully raised their first batch of workers they will stay in the nest so the only bumblebees you will see then are normally workers (followed by males and young queens later in the year).


Here are the most common bumblebee species you will encounter now and later in spring: 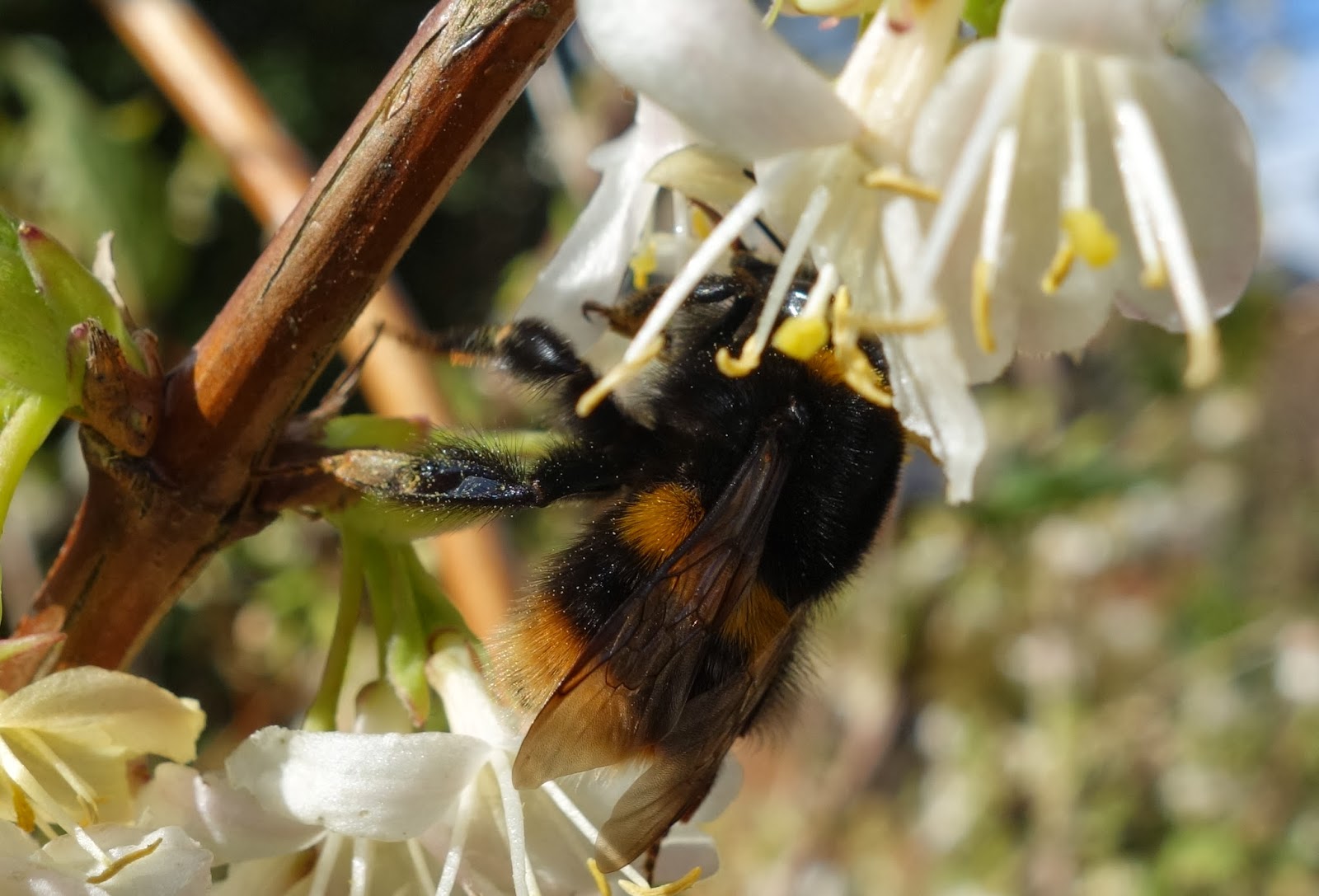 
Buff-tailed bumblebees in the south of the UK can maintain winter colonies which will produce bumblebee workers throughout winter and early spring (the workers have a white tail instead of a buff-coloured tail). These workers are mostly quite small so it should be easy to distinguish them from the much larger queens. 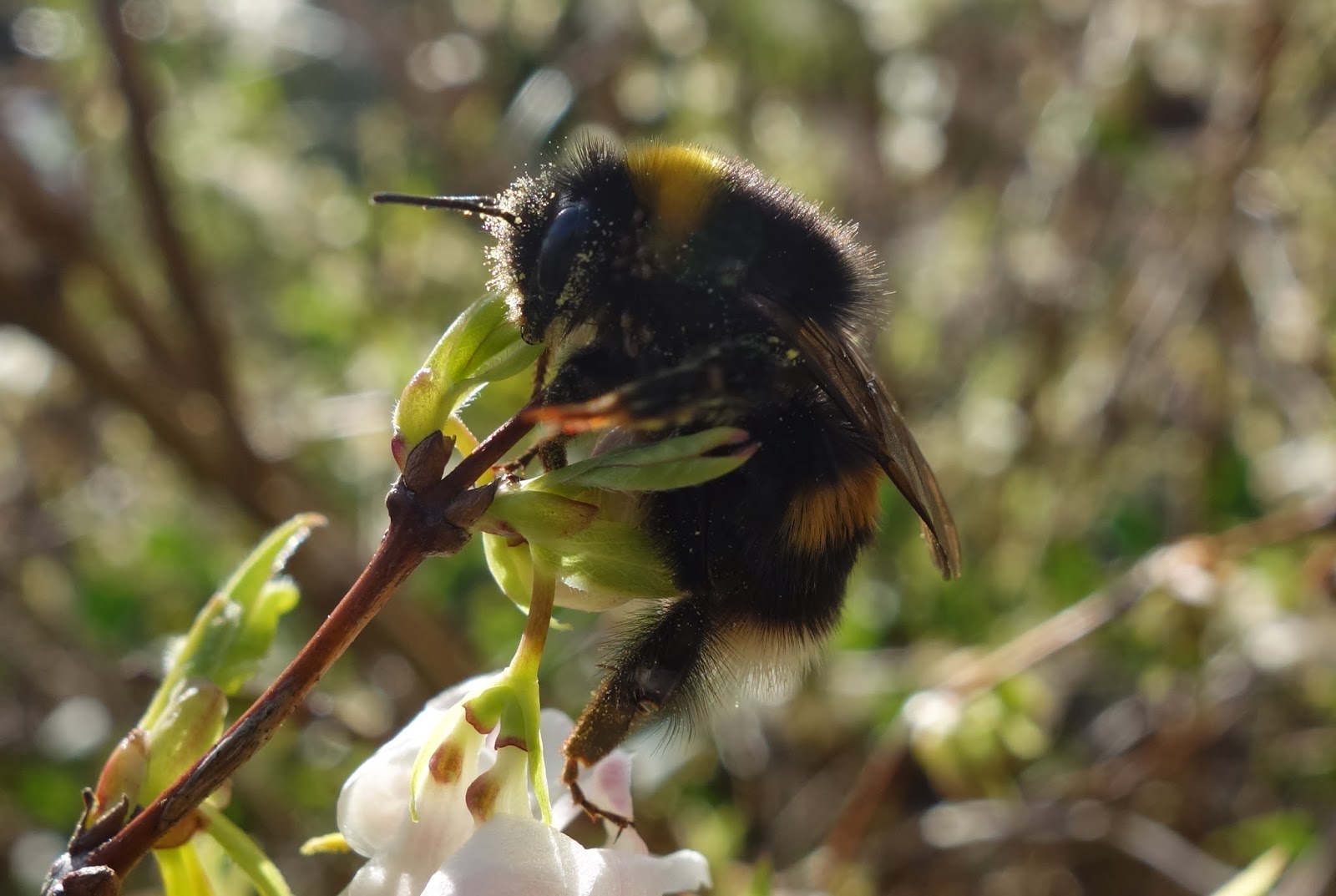 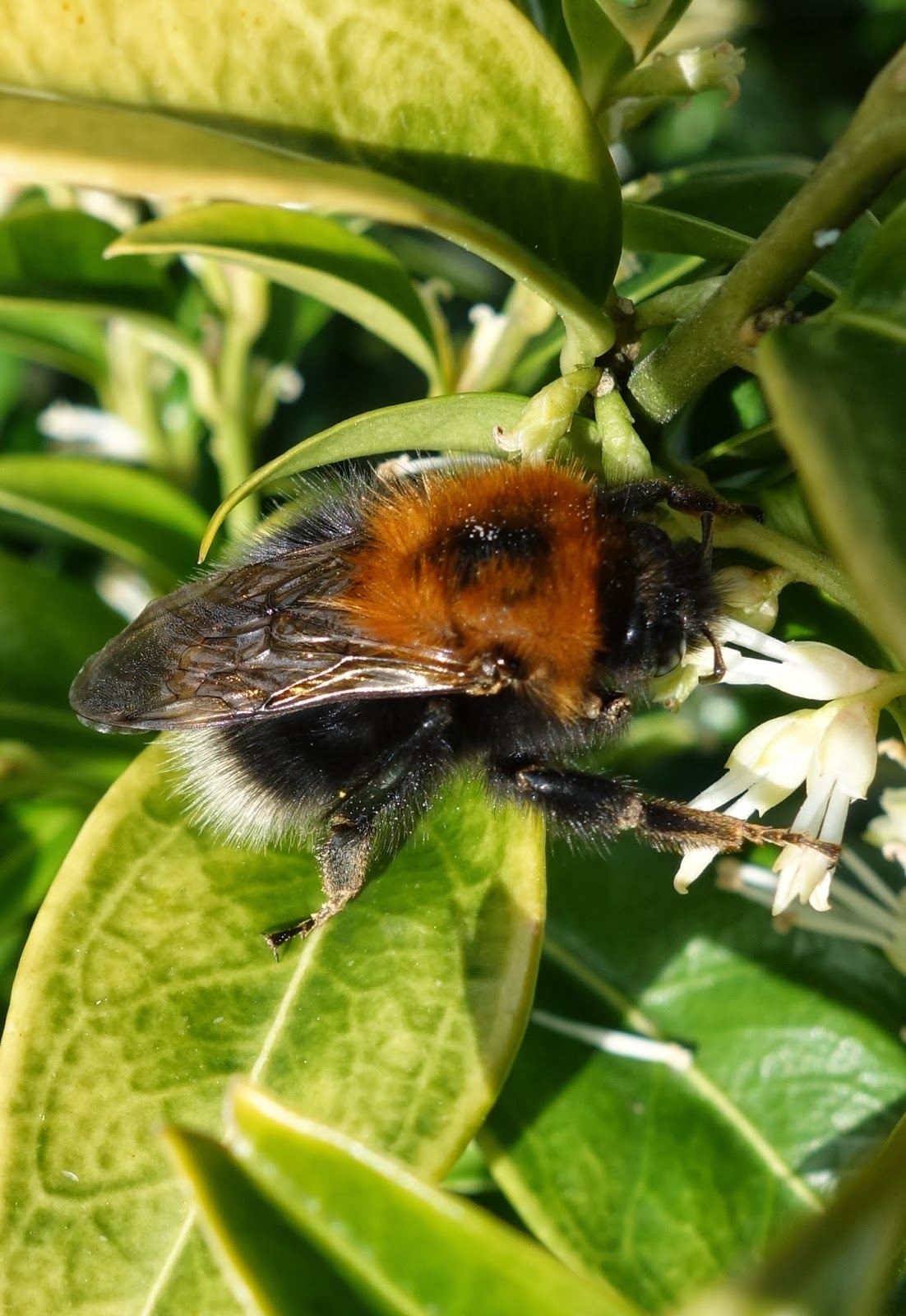 Tree bumblebee (Bombus hypnorum): Another early emerging bumblebee queen with a very distinctive colour pattern which cannot be confused with any other bumblebee in the UK. The queens have a black head, a ginger-coloured thorax, a black abdomen and a pure white tail. The queens are medium sized and can emerge as early as February in mild weather. Tree bumblebees are quite common in England, especially in the South, but extremely rare or absent in Scotland.
The queens like to nest above ground, often in bird boxes, tree holes or other cavities. I have also found a nest in a dalek composter once which was filled with moss raked from the lawn. 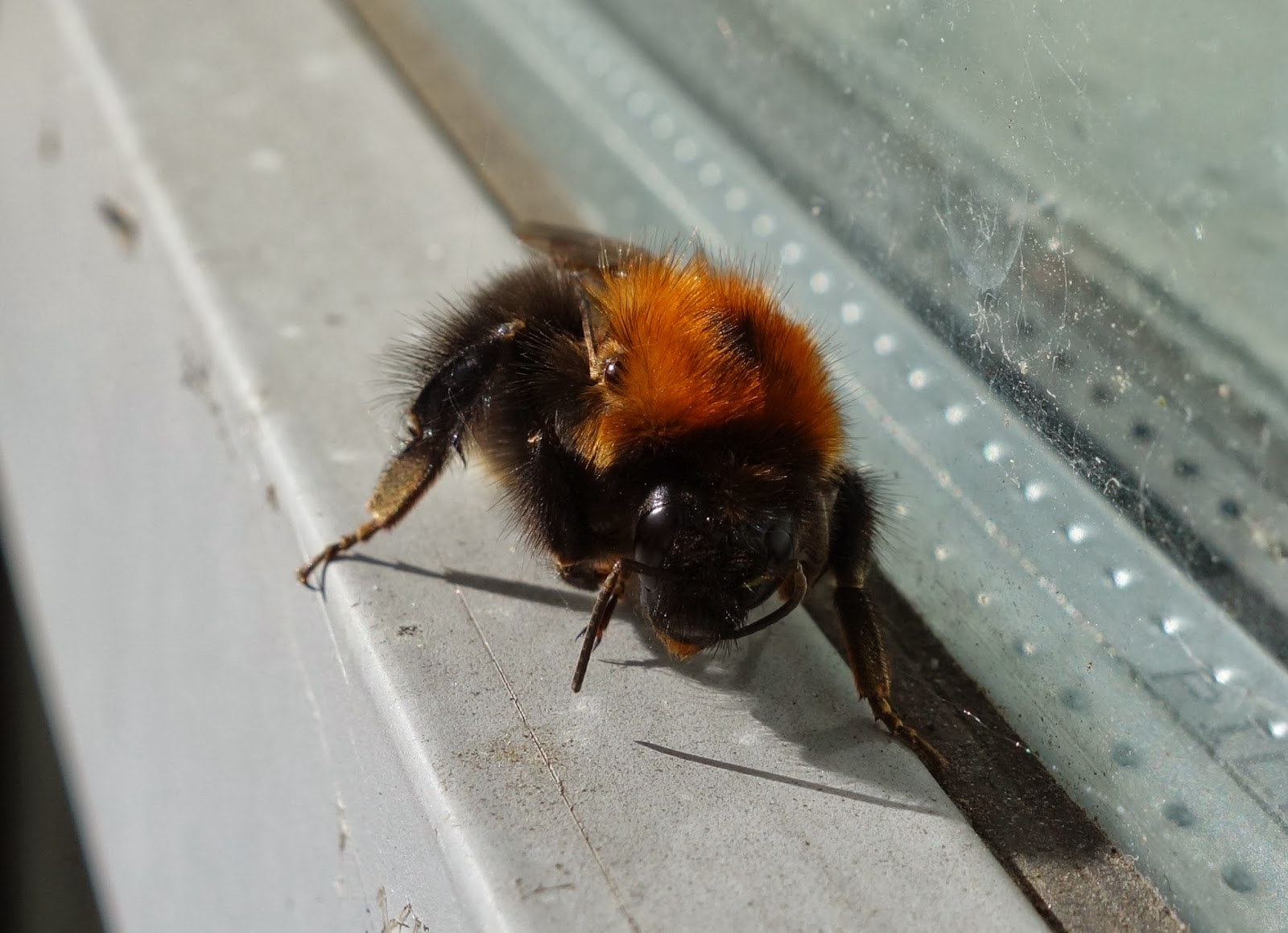 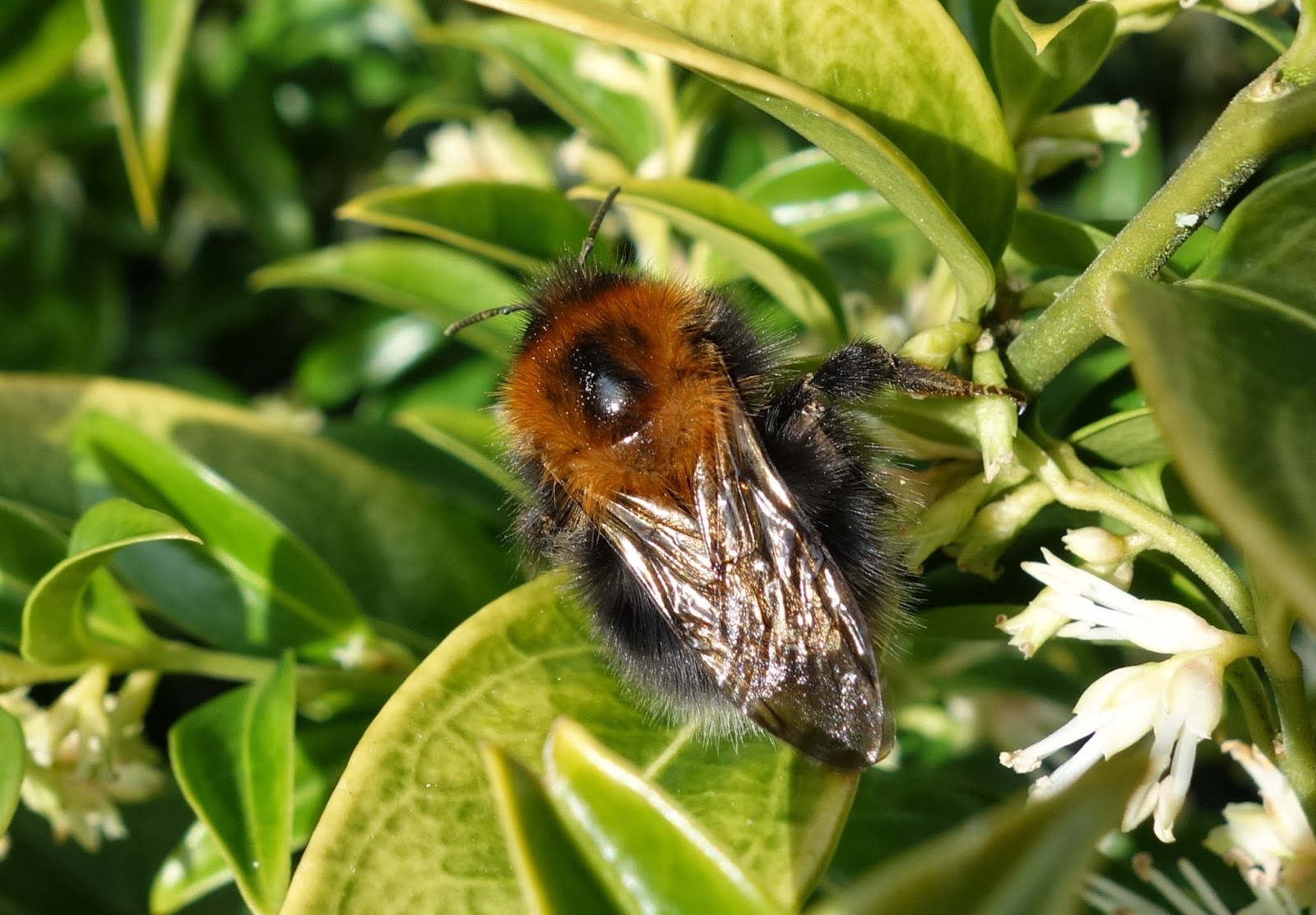 Early bumblebee (Bombus pratorum): The queens are smallish to medium-sized and have a yellow band on the thorax, a yellow band on the abdomen and an orange tail.
The queens emerge in early spring (often in March) and are one of the earliest bumblebee species to establish a nest and often have 2 (sometimes 3) colonies in a year. Nests are quite short-lived and can be below-ground in old mouse or vole nests as well as above-ground in old bird boxes, cracks in walls or tree holes.
Early bumblebee queens do not seem to be very conspicuous as I have never seen one so far. Workers and males are quite a common sight in gardens in late spring and summer but the queens remain elusive.


Update: I have finally found an Early bumblebee queen. They are really quite small for a queen and easily overlooked. She was crawling on a footpath, quite exhausted and unable to fly. Nobody paid her attention and it was just a matter of time until someone would have stepped on her.
I let her climb on my hand which she willingly did and carried her to the next patch of dandelion flowers where I put her down. Once on the flower she immediately started to drink nectar. She must have been quite hungry.


Red-tailed bumblebee (Bombus lapidarius): The large queens are easy to identify as they have a black thorax and abdomen and a bright red to orange tail. They emerge later in spring, often in late March or April. This is a species with a more southerly distribution and is less common in Scotland.
The queens nest underground in old rodent nests, often at the base of dry stone walls or under  piles of stones. 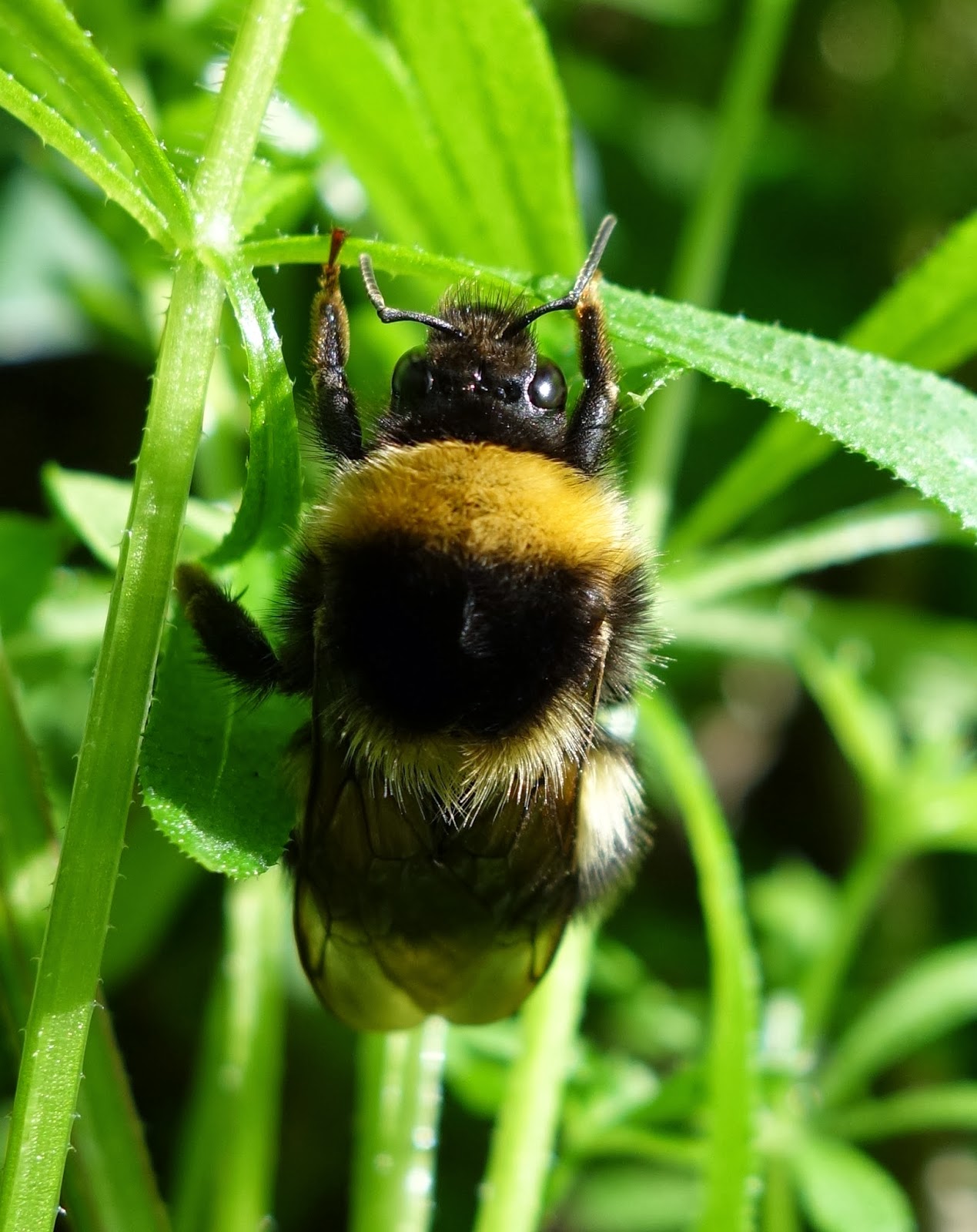 Garden bumblebee (Bombus hortorum): Queens are often medium-sized (sometimes even quite large) and look similar to White-tailed bumblebee queens but with the difference that they have one additional yellow band on the thorax. Garden bumblebees have the longest tongue of all bumblebee species in the UK which enables them to forage on flowers with deep corollas such as Comfrey (Symphytum spp.) and Foxglove (Digitalis spp.).
The bees like to nest on or just below the ground and have fairly small and quite short-lived colonies. They sometimes nest in awkward places in sheds, buckets or lawnmowers but also use old rodent nests.


Common carder bumblebee (Bombus pascuorum): The medium-sized queens emerge in late March or April and are completely covered in ginger-coloured hair (especially on the thorax) with some black and greyish hairs on the abdomen. The queens like to nest above ground in grass tussocks, under hedges and in piles of plant litter. The bees cover their nest with dry grass and moss and you can sometimes watch them scrambling around collecting bits of these in the vicinity of the nest. 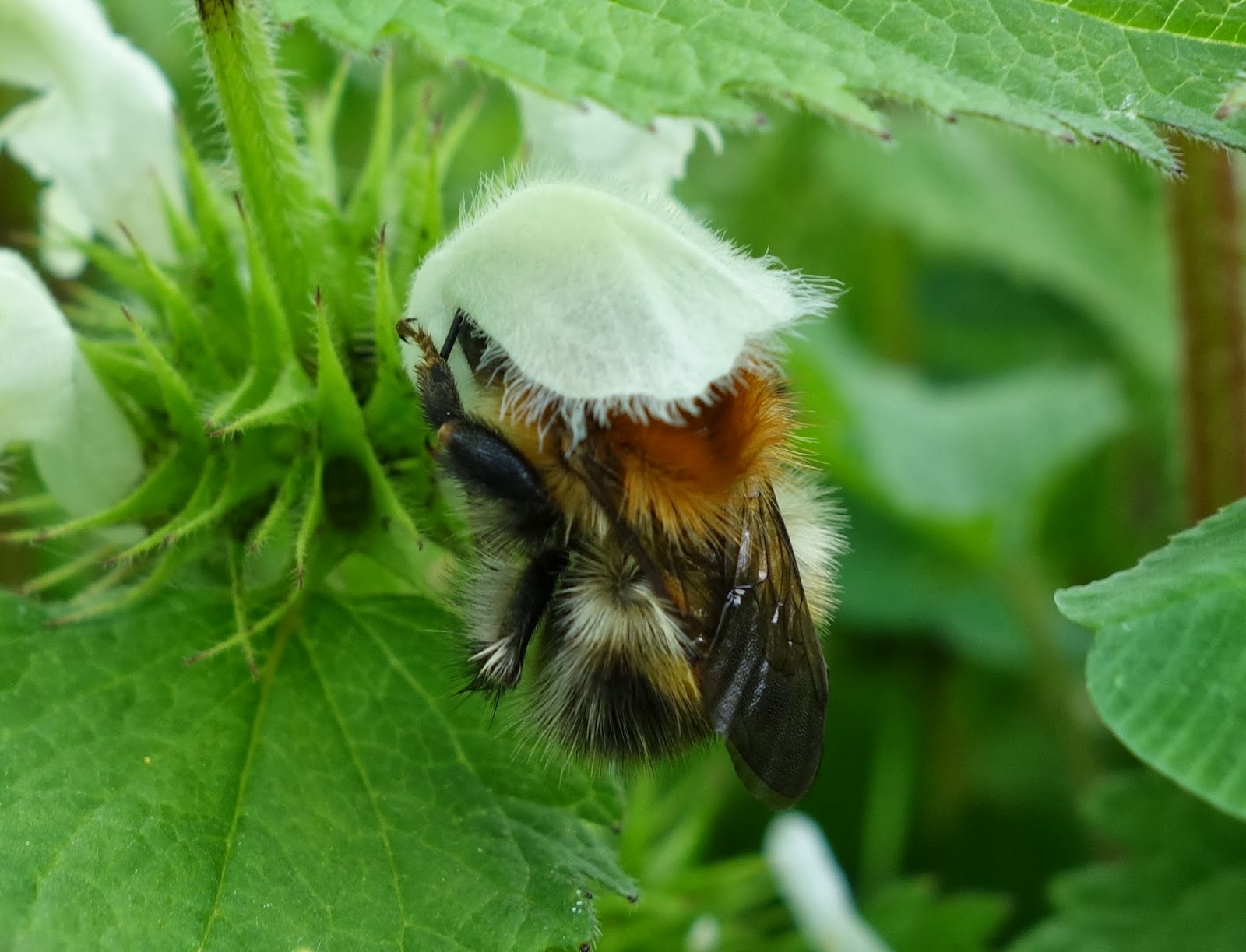 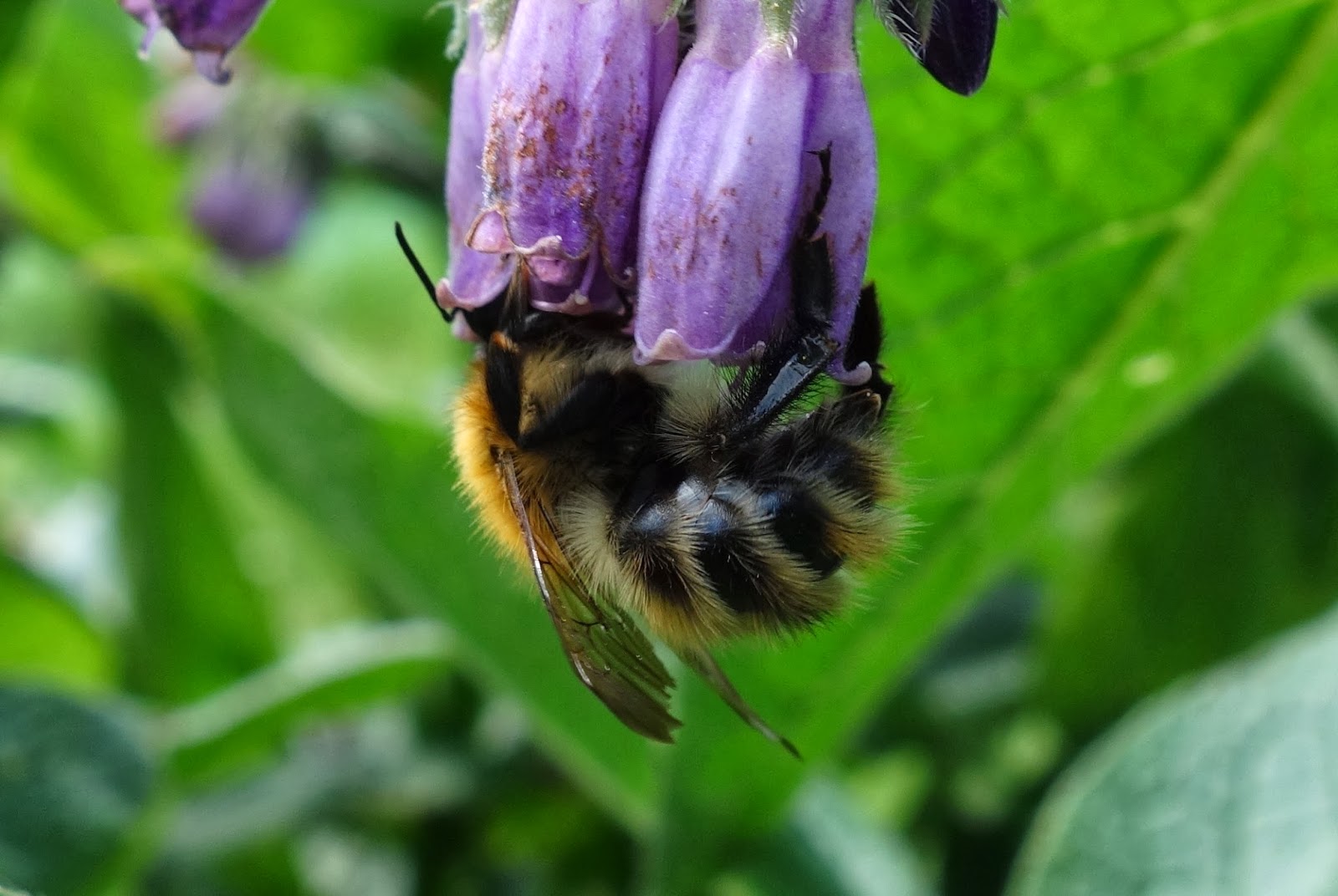