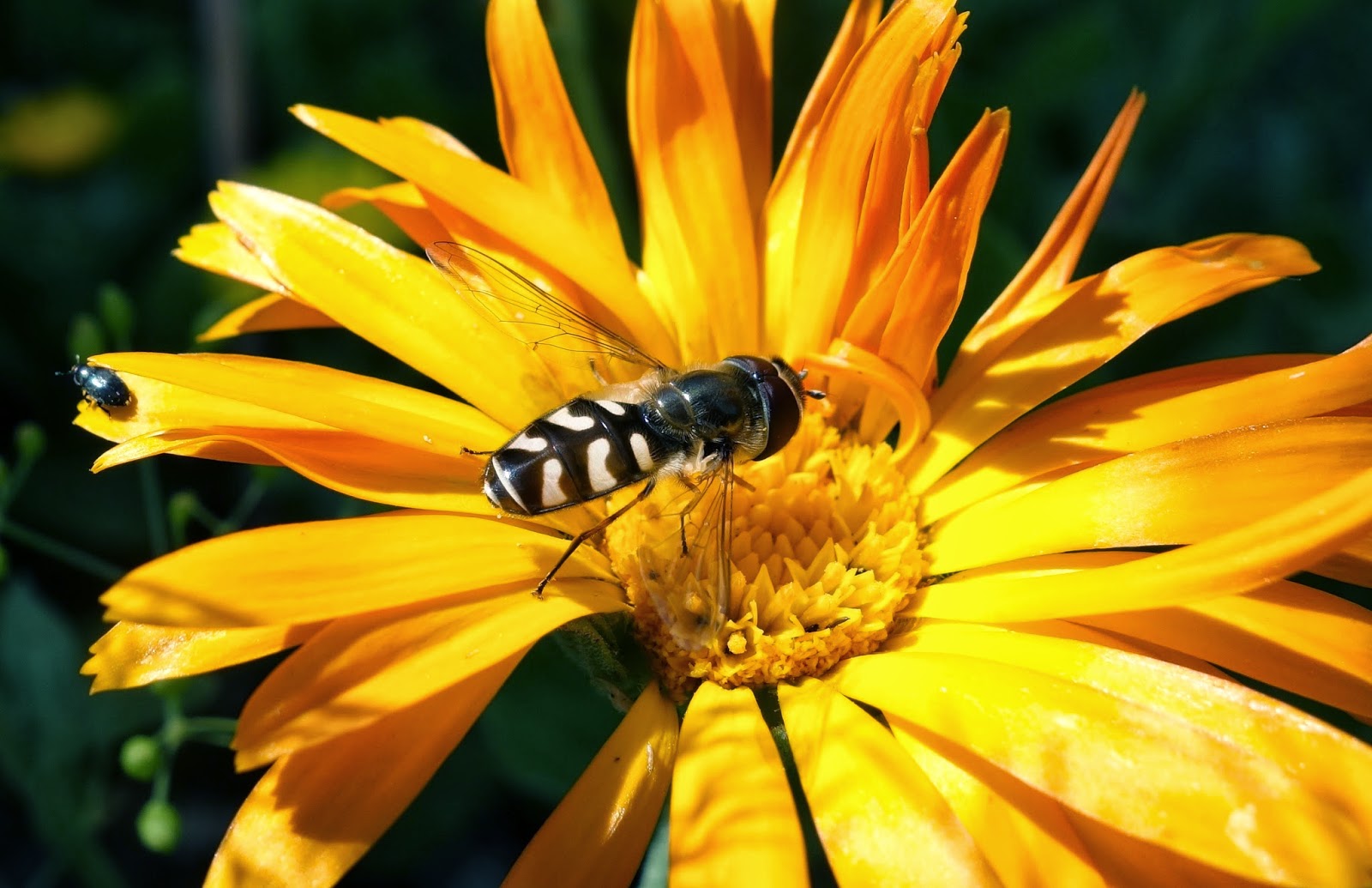 Bees are often seen as the main insect pollinators and as they are certainly playing a very important role in pollinating many plants we should not forget all the flies; many of them will visit flowers for pollen and nectar as well.
There are around 7000 known species of flies known in the UK (for comparison:  there are about 250 species of bees). Flies have only one pair of wings; the second pair is converted into stalked knobs which are called halters or balancers.  Most adult flies have well-developed wings and fly readily and many of them are important flower visitors.

Flies usually feed on exposed fluids but can also eat small solid particles such as pollen grains. The taste organs are mainly located near the mouth but flies can also taste with their legs (taste organs in the legs are located in the tarsi, the end part of the legs). The legs of Blow flies (Calliphoridae) for example are 100-200 times more sensitive to the taste of cane sugar (sucrose) than the human tongue. Some flies locate suitable flowers by following the distinctive flower scent which they detect with their antennae. Most flower-visiting flies also have large eyes and at least the higher developed flies have colour vision which helps with finding flowers from afar.

In contrast to many bees, flies still fly in less favourable weather conditions and on cold, windy and overcast days flies are often the only flower visitors you will see. Plants growing in damp, shady places such as woodlands would struggle to attract bees but flies are often abundant in these places and quite a lot of woodland plants get pollinated by flies and not by bees.

Flowers are not only places to find nectar and pollen but are also used by some flies as a place to find a mate, to lay their eggs or to take shelter.

Flies (Diptera) can be split into two main groups, the Nematocera and the Brachycera. Nematocera have elongated bodies and long, often feathery antennae. Midges, mosquitos and crane flies belong to this group. Brachycera have a more roundly proportioned body and short antennae and all the remaining flies such as hoverflies (Syrphidae), house flies (Muscidae), blow flies (Calliphoridae) and flesh flies (Sarcophagidae) belong to this latter group. 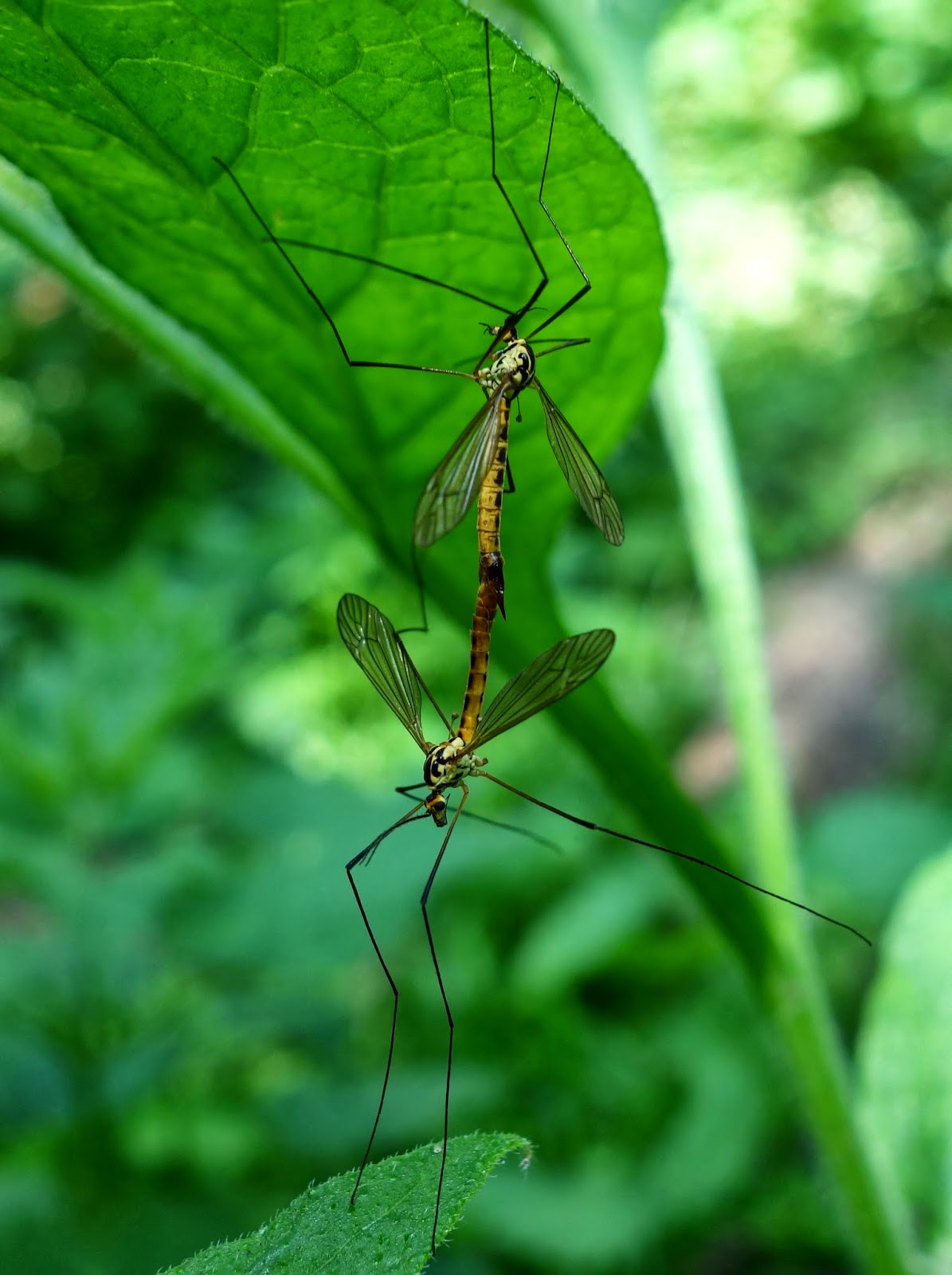 Mosquitos, crane flies and midges (Nematocera) are not very important pollinators due to their often small size and short mouth parts. Most visit flat or bowl-shaped flowers with well-exposed nectar which they can easily reach. Some eat pollen and especially mosquitos can be seen visiting flowers at night.

An interesting relationship exists between the small owl-midges (Psychodidae) and the common woodland plant lords and ladies (Arum maculatum). Lords and ladies flowers in May with a poker-shaped inflorescence called spadix. The male and female flowers are at the base of the spadix with a ring of hairs above which acts as an insect trap. The little owl-midges are attracted to the faecal odour and the higher temperature (up to 15 C higher than ambient temperature) of the spadix and get trapped under the ring of hairs. While trying to get out they are dusted with pollen from the male flowers (which are just under the ring of hairs) and once they escape carry the pollen to other plants where they pollinate the female flowers. 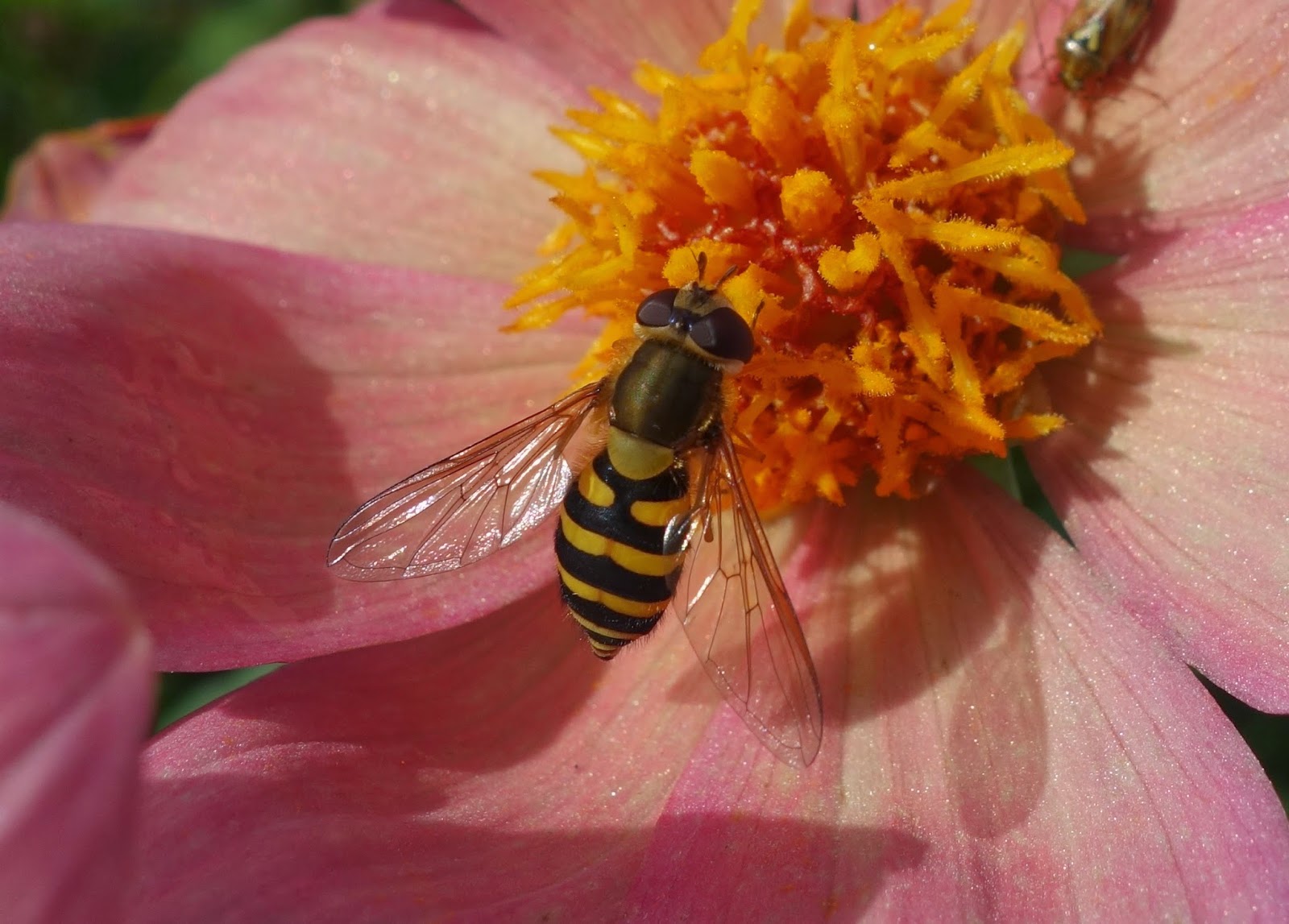 Hoverflies (Syrphidae) are the most important family of flower visitors among flies. There are over 270 species of hoverflies in the UK and many are brightly coloured with yellow and black or red and black bodies. Many of the darker coloured species often look highly polished and some hoverflies are very furry and resemble bumblebees. Many hoverflies can be seen visiting flowers in sunny places but there are also quite a lot of species living in damp shady woodlands or at the woodland edge. Hoverflies get their name from the ability to remain stationary in the air which makes them easy to distinguish from wasps or bees.

Most hoverflies visit flowers for nectar but some hoverflies such as some Melanostoma spp., Syrphus spp. and Episyrphus balteatus (Marmalade hoverfly) are specialised pollen feeders and often visit flowers just to feed on the pollen. 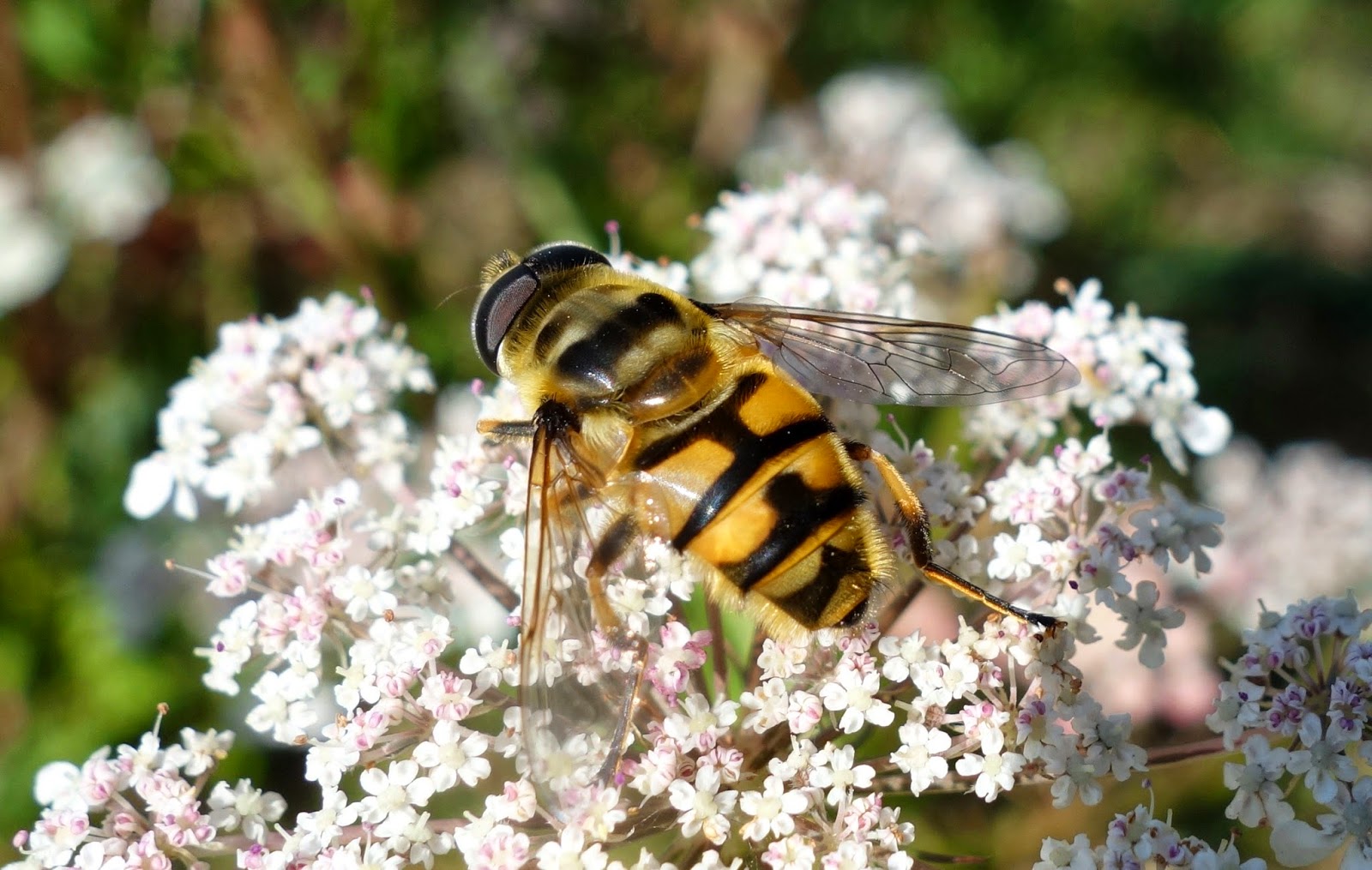 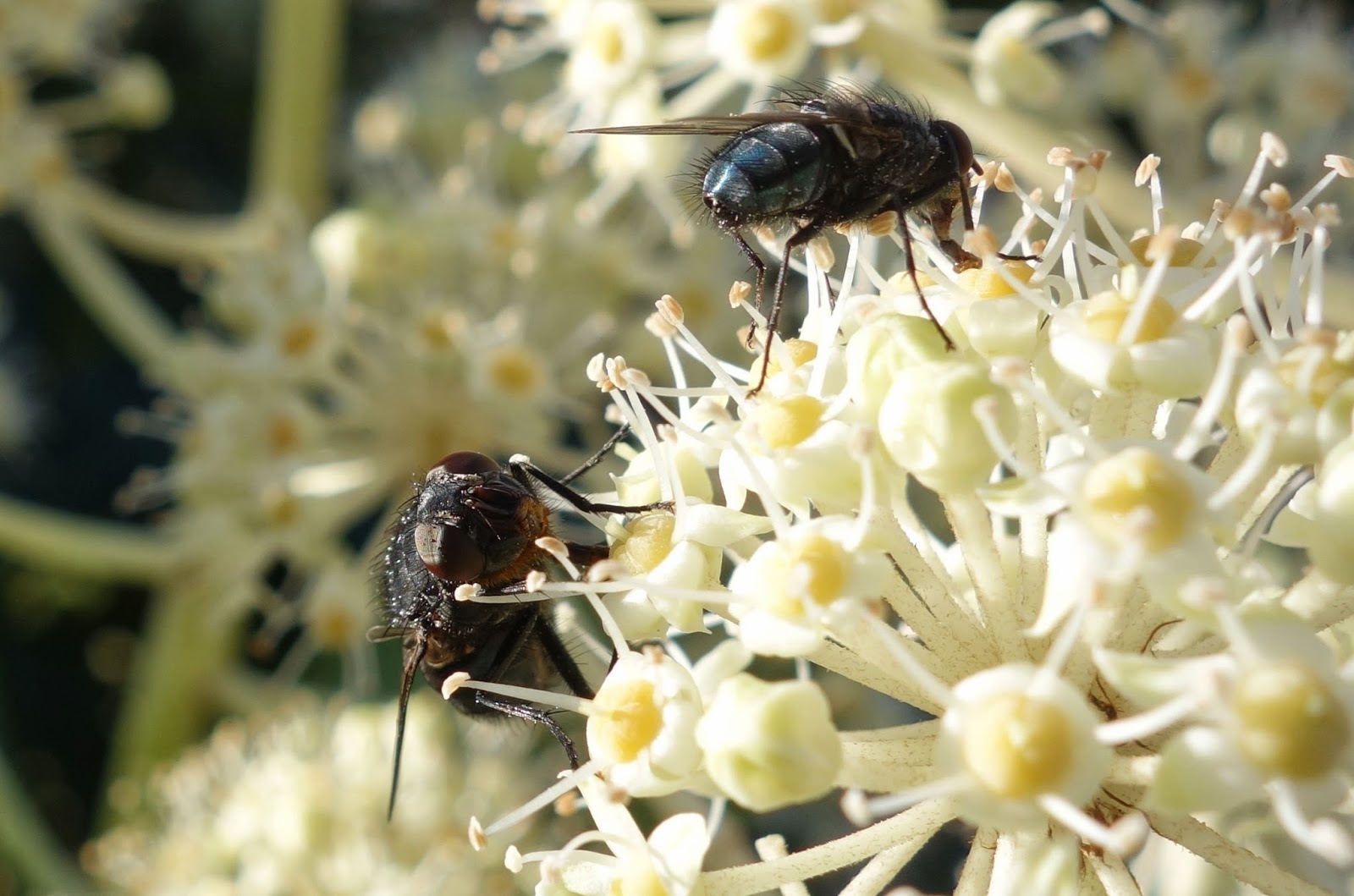 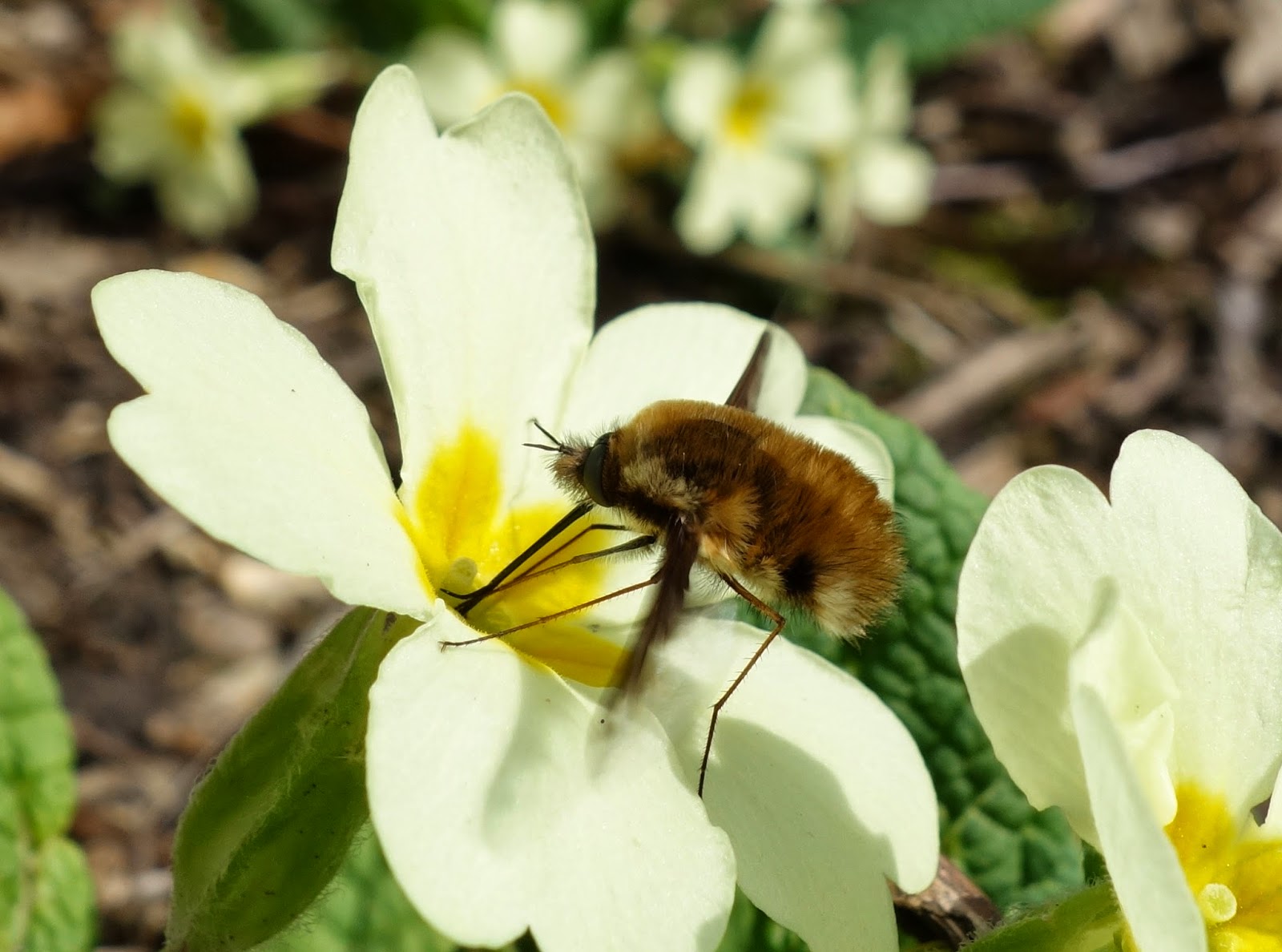 The bee-flies (Bombyliidae) include some of the most highly specialised flower feeders among the flies and are often medium-sized hairy flies with a very long slender proboscis. They often visit relatively large long-tubed flowers such as primroses (Primula vulgaris), cowslip (Primula veris), honesty (Lunaria annua) and wallflowers (Erysimum cheiri). Similar to hoverflies, bee flies are able to remain stationary in the air and usually hover in front of flowers when feeding. Bee flies are highly-developed nectar feeders and move rapidly from flower to flower to drink nectar. As they are early-flying they can be important pollinators of early spring flowers.

Another interesting group of flies which visits flowers are the thick-headed flies (Conopidae). They have a long proboscis and like to visit small tubular flowers such as wild marjoram (Origanum vulgare) and flowers in the daisy family (Asteraceae) and carrot family (Apiaceae).

Tachinid flies (Tachinidae) are small bristly flies, some of them such as the relatively common Eriothrix rufomaculatus with a black and red body. The larvae of tachinid flies are internal parasites of other insects and arthropods but the adult flies are often found on flowers such as mint (Mentha spp.) and flowers from the daisy and carrot family.

Other flies commonly found on flowers are the blow flies (Calliphoridae) which are often metallic green or blue in colour and the large grey flesh flies (Sarcophagidae). Both can also be found feeding on carrion and excrement but will often visit flowers to feed on the nectar.

Dung flies (Scathophagidae) are predatory flies and often visit flowers to seek out prey. But many dung flies will also feed on the pollen and nectar of the flower.


There are many other flies which will visit flowers for feeding or other reasons but there is not enough space here to mention them all. All flower-visiting flies provide an important pollination service to many plants and should not be forgotten and overlooked.
Posted by Reading team at 13:27