It seems that our invertebrate friends are as jealous of their patch as anyone, and will do their utmost to turf out interlopers.  Bumblebees seem to be especially territorial, and bombastically biff hoverflies, bee-flies and other bee species off their clump of chives or out of their patch of forget-me-nots.  I have so far not managed to catch this bee-bouncing on film, but be assured I will post here as soon as I do!

Bumblebees in a wildlife area of one of the city parks in Leeds were showing a lot of interest in knapweed flowers, despite the fact that the flower buds were still tightly closed.  Closer inspection suggested that they were supping something being exuded by the plant - you can see tiny droplets of something on the surface of the flower bud in the photo below.... 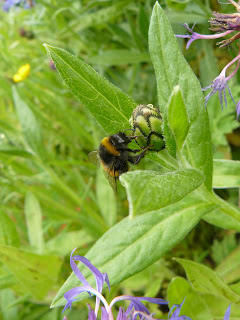 The question is, was the knapweed excreting something from the flower buds, and, if so, to what end?  It didn't seem likely that the bees were engaged in nectar-robbing, as the scales on knapweed are fairly tough - but we're happy to be wrong about that, if anyone knows better!  Ideas on a postcard, please, or as a comment below ;)

As an aside (slightly) - the wildlife area in this park, planted with species such as geranium, day lilies, thyme, knapweed, was really buzzing with things; a stark contrast to nearby 'traditionally' planted areas (predominantly begonia, petunia and tagetes marigolds), which were noticeably lacking in invertebrate visitors.

Update (11 June):
The plant there is, I think, an ornamental cornflower, Centaurea montana, rather than a knapweed - I'm  only slowly getting to grips with these civilised plants!
Posted by Leeds team at 22:00