Apologies for the apparent obsession with Andrena bees, but they're out and about at the moment, and soon to be over and done for another year (well, most of them, anyway), so we have to make the most of our brief time together.  We've been spotting them in all sorts of habitats (cemeteries, gardens, woodlands), which is interesting in itself - but what has really tugged at my metaphorical sleeve is the occasional interaction we have seen between these and other bee species.

Everywhere we have seen Andrena bees, we have seen the small yellow and black figures of Nomada bees, skimming over the ground like tiny, wasp-like, airborne sharks.  These are also known as cuckoo bees, and just like the feathered cuckoos, they lay their eggs in the nests of other species - in this case, primarily Andrena bee species.  I've already posted pics of Nomadas hawking over ground used by Andrenas for nest sites in gardens, and here's another - a face-off between Andrena and Nomada females at the entrance to a nest site. 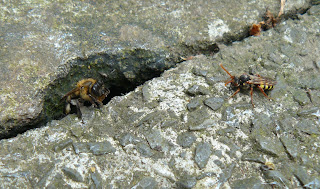 So, just as our more southerly colleagues have already posted, manmade surfaces may hold more use for pollinators than you might at first think!  We've been discussing the relative merits of various habitats, and this illustrates well that it's not always just about flowers, pollen and nectar resources - provision of nest and overwintering habitats are also important.
Posted by Leeds team at 20:42