It’s been a long time in coming, but we thought that an introduction to the Reading field team was about due! Dr. Nadine Mitschunas, Dr. Peter Harris and Dr. Sam Cartwright have been the field ecologists out and about in the Reading urban area.

Nadine is our expert botanist, although she is originally a bat behaviourist by training. She hails from the Thuringian Forest in eastern Germany and has been working in research on the ecology of native and ornamental plants for several years now. Her curious plant-ID anecdotes and understanding of the little details that differentiate one similar plant species from another visually, has led to both Peter and Sam now being able to accurately identify most of the species we encounter during our surveys.  Nadine also holds her own allotment which she carefully manages for an award-winning bounty of fruit and veg, but also for wildlife. She keeps a bee hotel and over 30% wildflower habitat in the allotment to encourage insect pollinators. 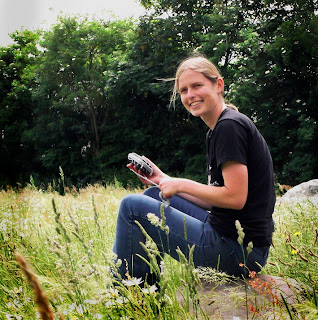 Nadine in one of the parks we are sampling

Peter is an entomologist; his interests are in the community ecology and biodiversity of invertebrate assemblages. Indeed, his PhD examined the invertebrate communities (Spiders, Beetles and Shieldbugs) associated with juniper, Juniperus communis, on Salisbury Plain, and the effect which habitat management had on these. He is also an expert bee-catcher and many of the close-up action photographs we've posted on this blog, of wild bees foraging, are down to his sharp photography skills. 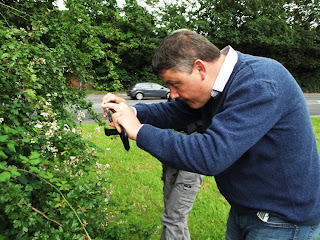 Finally, Sam is originally an avian ecologist by trade, having previously studied threatened African bird populations (most recently the Mauritius kestrel) affected by habitat loss and changing climates. Her attention is still drawn to the glorious sight of a low-flying red kite above the suburbs, or an unusual bird call in the woodland, but she is enjoying the chance to work in the UK for a change, and especially this novel foray into studying flying creatures other than birds! 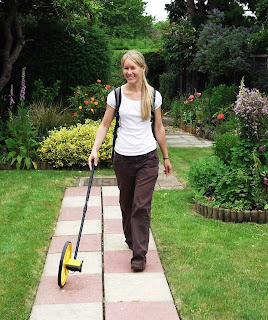 Both Peter and Sam completed their doctoral research locally, at the University of Reading, and the team is based in the Centre for Agri-Environmental Research in the Agriculture Building. The three of us have been surveying the gardens, cemeteries, allotments, parks, road verges and other green (and not-so-green) spaces in Reading since April.  Do look out for us if you are in Reading on a sunny day. We're the ones walking in line staring at the ground with a measuring wheel, a fold-up ruler and net, probably laughing loudly at one of Peter's jokes!

And more photos of us in action ... 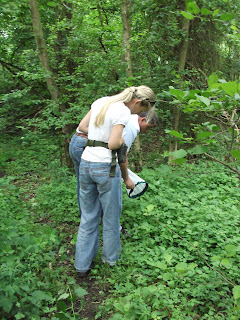 Sam and Peter sampling in a local nature reserve 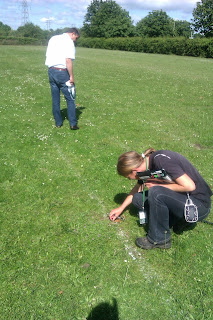 Peter and Nadine walking a transect and looking for pollinators and flowers
Posted by Reading team at 10:29