As the summer progresses, flowers that were common early on, like dandelions, are now less numerous.  They’re being replaced by a very similar-looking Compositae (daisy family) known as Cat’s-ears or Hypochoeris radicata.  In fact, there are many many yellow Compositae flowers, and they all look very similar to the untrained eye.  This shouldn’t put you off – there is beauty in the minutiae after all.

A great example is the exceedingly common creeping buttercup (Ranunculus repens) – that low-growing bright yellow flower we hold against our throats as children to see if the ‘glow’ from the flower indicates a love of butter.  Well, look again.  Perhaps you are looking at a Potentilla reptans flower? The geometric perfection of a Potentilla’s leaves is the giveaway here. 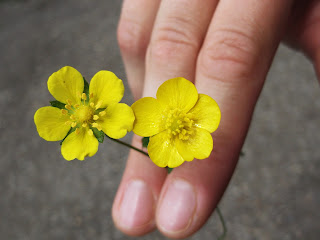 On the left is the Potentilla, on the right the Ranunculus
Another is the difference between the tiny yellow-flowering Lesser Trefoil (Trifolium dubium) and its confusion species Black Medick (Medicago lupulina), both often found in mowed grasslands. Or that of Hogweed (Heracleum sphondylium) which is in flower now, and the common Spring-flowering Cow Parsley (Anthriscus sylvestris) – both are upright, chest-high plants with umbels of tiny white flowers found on unmowed road verges, in woodlands and in hedgerows.

And how about the bee mimic fly? Look closely at the behaviour of what you think is a bee.  If it is a bee mimic fly it will probably land frequently on leaves and other surfaces (as well as flowers!) whereas a bee will be determinedly foraging on flowers in particular. 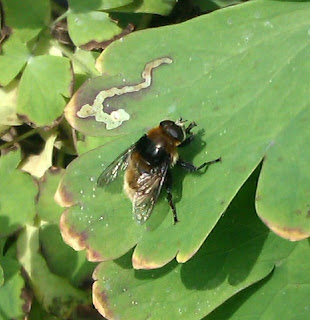 So, the lesson is: don’t be fooled by the plants and animals you see…take a closer look and you may be looking at something new.
Posted by Reading team at 12:59