We always think bumblebees are cute and fluffy and help pollinate our plants in return for food (pollen and nectar). Most bumblebees are really doing what we expect them to do, but some have a darker side: they take the food (in this case nectar) without doing any pollination. This behaviour is called nectar robbing.

But the aforementioned two species have found a way around this problem. They bite a hole into the flower tube near its base, i.e. where the nectar is located, and sip the nectar trough this hole. Once a hole is created other bumblebees may use it as well, and this is called secondary nectar robbing. As these bumblebees don`t access the flower in the normal way they do not take up  any pollen and thus do not get involved in pollination.

We have watched Bombus terrestris and B. lucorum robbing nectar from comfrey flowers (Symphytum officinalis) at an allotment site (see two pictures below). Nearly every single flower had one or more holes and the bumblebees were busy flying from one flower to the next sipping nectar through the hole. We have not seen a single long-tongue bumblebee accessing the flowers in the normal way. Pollination of the comfrey flowers cannot be really high, but luckily comfrey is partly self-fertile so doesn`t really need the bumblebees to distribute pollen from one flower to the next. 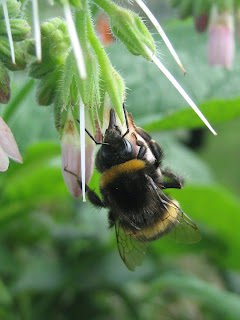 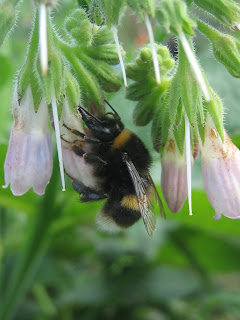 Have a look yourself, comfrey is still flowering and perhaps you will spot the little nectar thieves at work on a sunny day.
Posted by Reading team at 12:03