Bee impostors on the loose 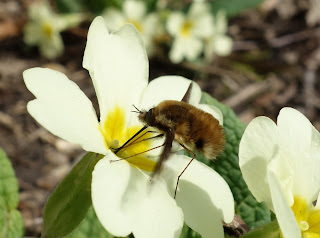 Have you seen a fluffy bee look-alike lately, hovering around flowers, especially primrose, violets, cowslips and pulmonaria? Chances are you have seen the Large bee fly (Bombylius major), a fly who pretends to be a bee.


Large bee flies belong to the Bombyliidae, a large family of bee-mimic flies with a worldwide distribution. Large bee flies (Bombylius major) can be found mainly in temperate Europe, North America and some parts of Asia and the adults fly between late March and June.


The Large bee fly is with 12-18 mm quite a large fly with a very hairy body, long hairy legs which dangle while in flight and a very long proboscis used to feed on nectar. The flies feed on many different spring flowers but they seem to prefer yellow and blue tubular flowers. Bee flies like to fly along woodland edges, in woodland clearances and on meadows and can often be found in gardens as well.

Large bee flies have quite an interesting reproduction strategy as their larvae parasitise solitary bee (particularly digging bees such as Andrena) and wasp larvae and sometimes also beetle larvae and caterpillars. After mating with the males the females lay their eggs in front of solitary bee and wasp nesting burrows (mimicking a bee helps with getting close to the entrances). The female fly often dips her eggs in mud first to make them heavier and then flicks them towards the nest entrance. Once hatched the very agile fly larvae enter the nesting burrow and first feed on the stored food before eating the bee/wasp larvae next.

Sometimes the female fly cannot get close enough to the bee/wasp nesting burrows to lay their eggs so she deposits her eggs in flowers instead which are visited by the bees. The larvae hatches and attaches itself to the unfortunate bee and is carried into the nesting burrow.

When you are next out and about in a woodland or park with patches of primroses and other early spring flowers look out for these fluffy flies and you may even find them flying around in your own garden.