For all who liked part one of our "How to recognise perennial meadow plant species when not in flower" (http://urbanpollinators.blogspot.co.uk/2013/03/how-to-recognise-perennial-meadow-plant.html) here comes part two. 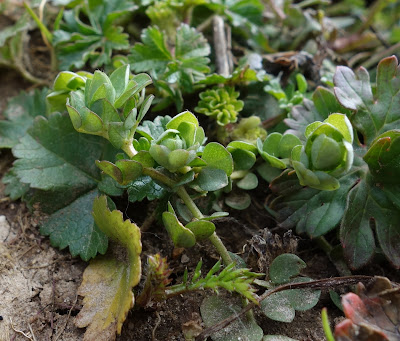 Bird`s-foot trefoil has clover-like pinnate leaves with 5 leaflets (instead of 3 as in clovers), the lowest two at the base of the leaf axis. Leaves are glabrous to sparsely hairy. The plants are very small at the moment and a bit of searching is needed to find them.


White clover has the typical clover leaves with 3 leaflets (the scientific name "Trifolium" means "three leaves"). The leaves are hairless and have a white marking. The plant has a creeping growing habit with roots forming at the nodes. Red clover looks similar, but leaves are hairy and a bit more elliptic and plants are not creeping.

Red and White Campion have hairy often glandular leaves which are elongated and simple. Both plants look very similar when not in flower so it is best to wait and see until the flower appears to distinguish both. Red and White campion can be confused with Black knapweed (Centaurea nigra) when not in flower but can be distinguished on the basis of the venation of the leaves. Also if the plants are a bit bigger, look for the position of the leaves along the stem. Campions have opposite leaves and Knapweeds have alternate leaves. 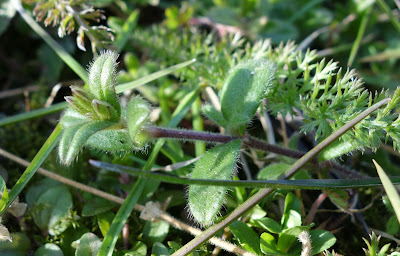 Common mouse-ear is a tufted or matted perennial with small, hairy leaves which are always opposite each other along the stalk. Quite a common plant in meadows but relatively small and inconspicuous. 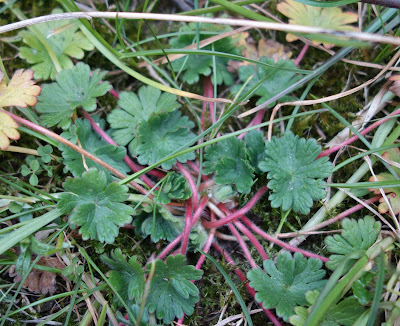 Dove's-foot and Small-flowered Cranesbill have rounded leaves with 7-9 lobes. Stems are downy to hairy and sometimes reddish in colour. Both species are quite common but can only be distinguished from each other if you look at the seeds. 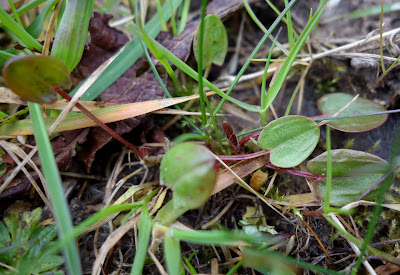 Common sorrel has rounded simple leaves which will develop very acute backward-directed basal lobes when older. Leave stalks are often reddish in colour. The taste of the leaves is very acidic (so if you want have a taste test). Common sorrel is not sown in our meadows but you can easily find it in most species-rich grasslands. 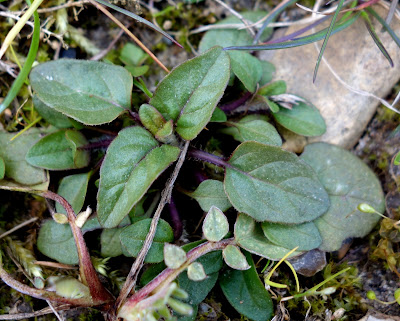 Common self-heal has entire or sometimes shallowly toothed slightly hairy leaves which are opposite along the stem. Once established it is spreading with creeping stems. Stems sometimes have a purplish colour (as the plant in the picture above). Common self-heal is fairly common in our meadows and can also be found in short grassland and lawns. 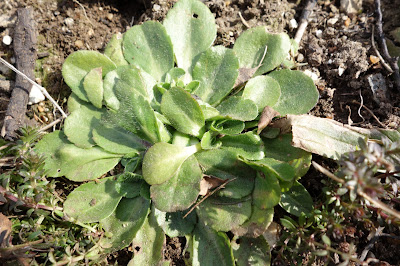 Most of you will recognise daisy when it is in flower and it often flowers throughout the year if the winter is not too cold. The plants form a rosette with simple, toothed light-green leaves which are slightly hairy. Very common in short grassland and also to be found in our perennial meadows. 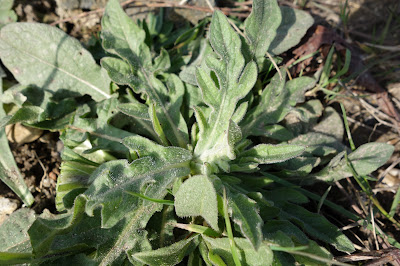 At first the leaves look very similar to Black knapweed (Centaurea nigra) but soon the plant will get the characteristic deeply lobed leaves which distinguishes it from Black knapweed, which has mostly entire leaves. Normally found mainly on calcareous soils (grasslands, waysides, cliffs and rough ground) it is not as common as Black knapweed in our meadows but you should find it with a bit of searching. 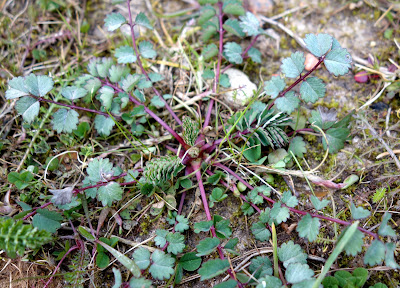 Salad burnet has hairless pinnate leaves with rounded but deeply toothed leaflets. The leaves smell of cucumber when crushed and can be used in salads. Salad burnet is not sown in our meadows but can be found in calcareous and sometimes neutral grasslands and rocky places.
Posted by Reading team at 15:24