What pollinators can you see in your garden at the moment? 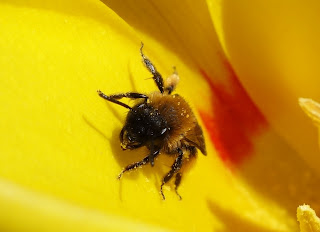 Finally spring has arrived with sunshine and warm temperatures. Plants are starting to flower everywhere and pollinators are out and about busily collecting pollen and nectar, searching for mates and looking for suitable nesting sites.
To give you a little help with identifying some of the more common pollinators out and about at the moment I have compiled a list of what pollinators I have seen so far.


Bumblebees: There are quite a lot of different bumblebees flying around now. Most bumblebees you see at the moment will be queens and they are busy searching for nesting sites now, flying up and down over rough grass, along hedgerows, sheds and woodland edges. Buff-tailed bumblebee queens (Bombus terrestris) are the most common bumblebees I am seeing at the moment. They are quite large and are often flying low above the ground with a distinctive buzzing sound. The queens of Bombus terrestris have a buff-coloured tail which distinguishes them from the White-tailed bumblebee queens (Bombus lucorum) which are normally smaller and have a white tail.


Common carder bee (Bombus pascuorum) is also out now. They have reddish-brown hair with some black hairs at the abdomen. 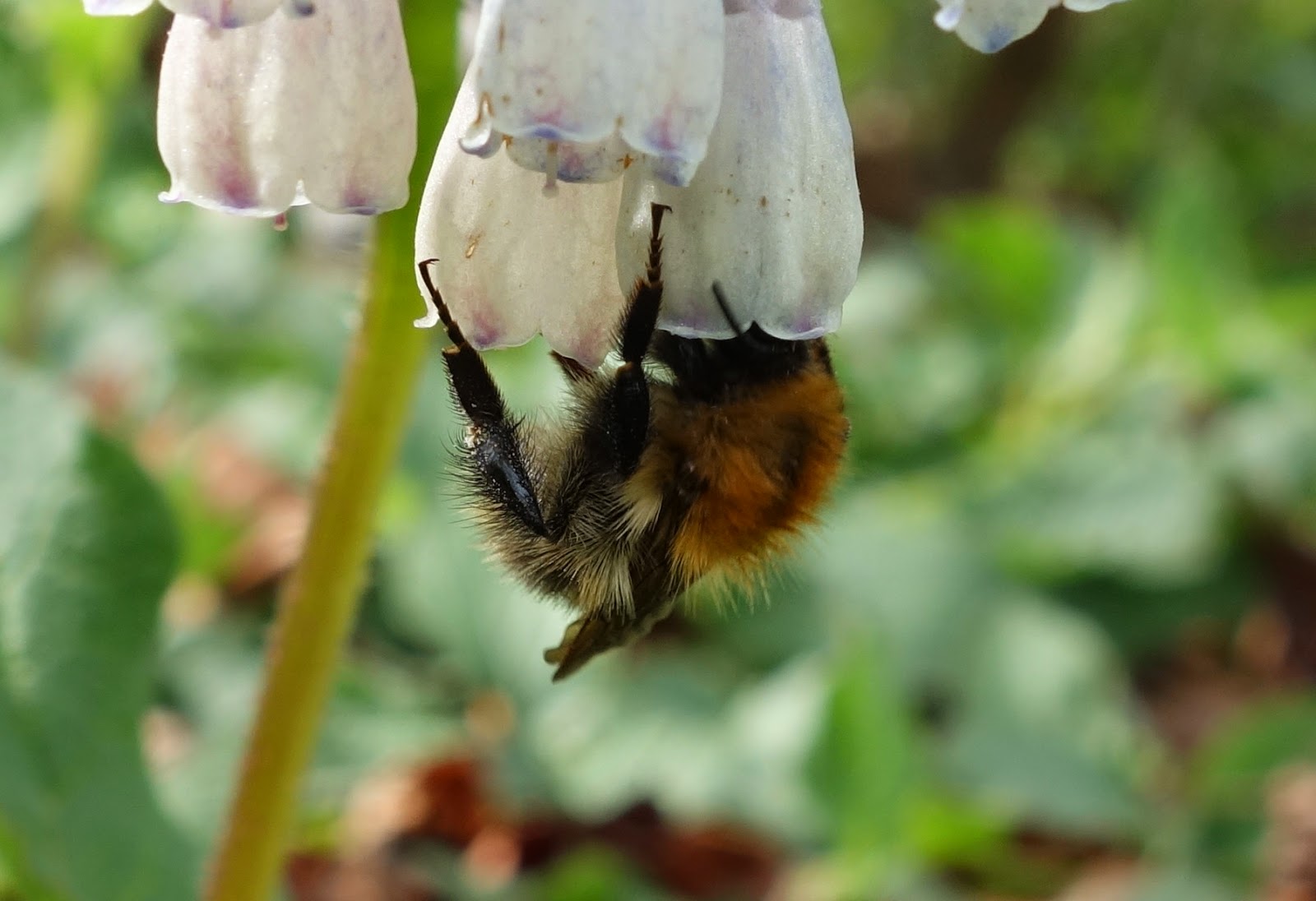 Another bumblebee you can see is the Tree bumblebee (Bombus hypnorum) with a ginger thorax, black abdomen and white tail. See here for more information about this species. 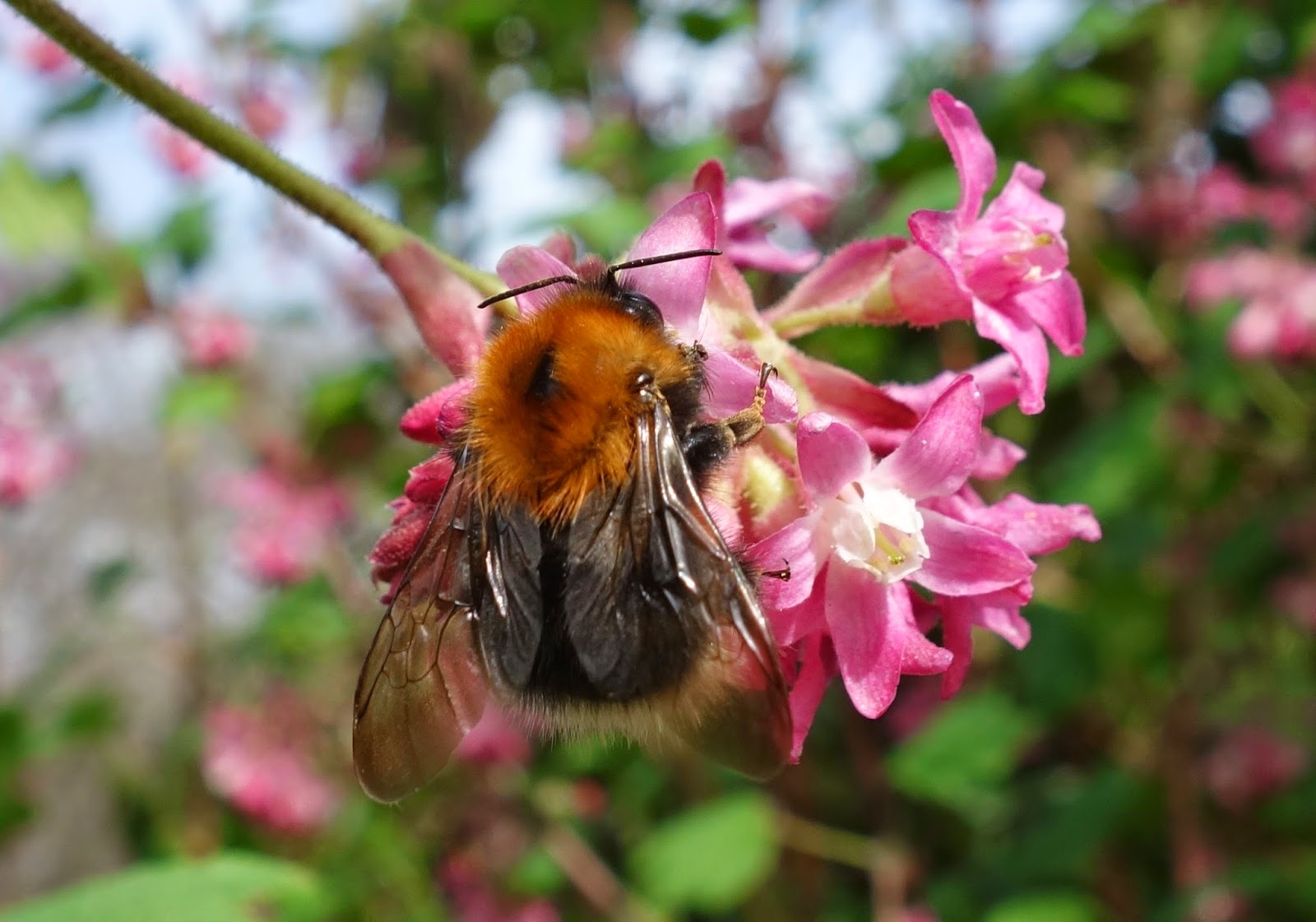 You can also see Red-tailed bumblebees (Bombus lapidarius), which are mostly black with a red tail. 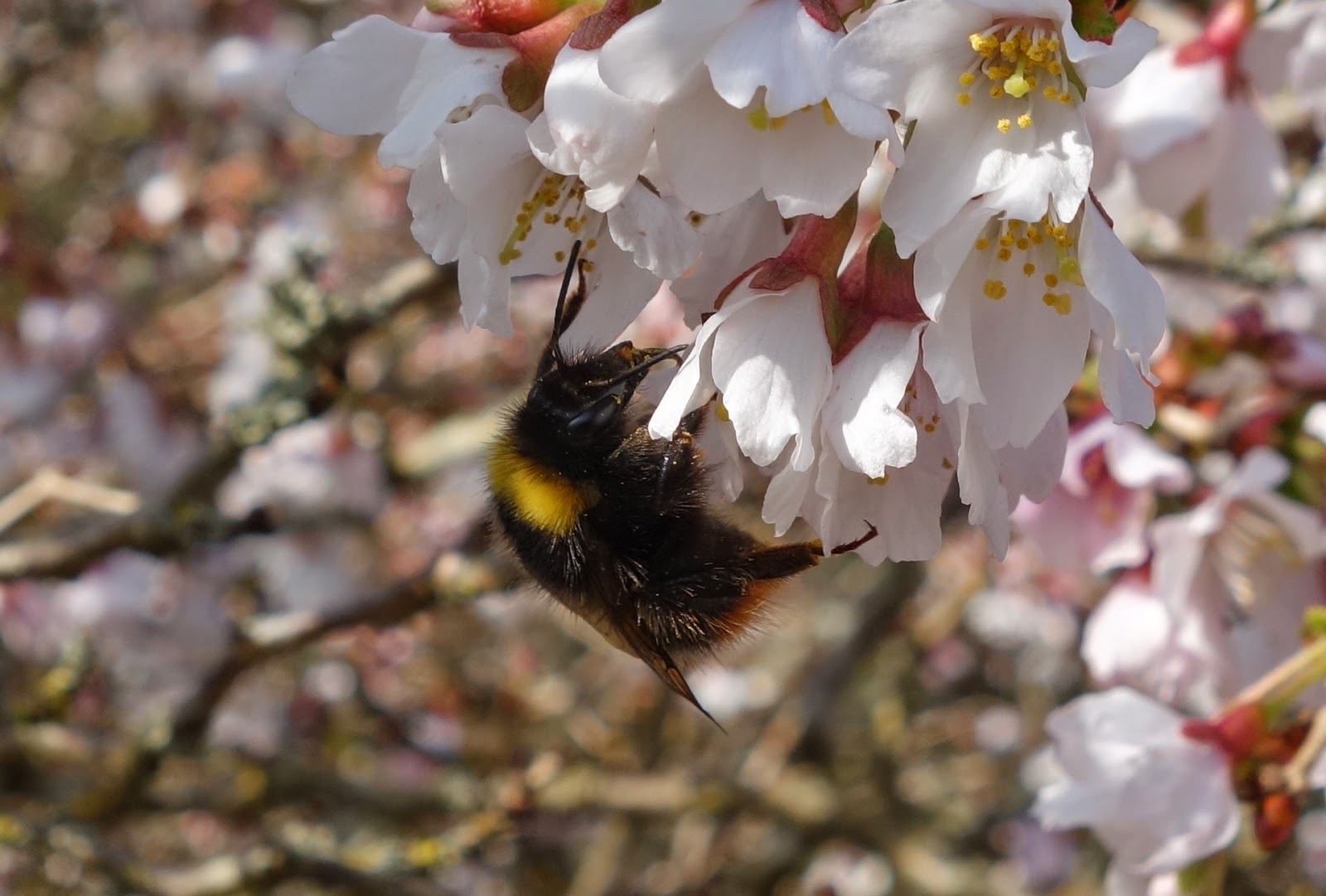 Also have a look at our blog post about identifying common bumblebee queens.


Solitary bees: Spring is a prime time for solitary bees as many species emerge early in the year, some as early as late February. There are more than 200 species of solitary bees in Britain but here are some of the more common species which are easy to identify.

Hairy-footed flower bees (Anthophora plumipes), probably one of the fastest bees in the UK, are often seen hovering around Pulmonaria flowers and other blue or yellow spring flowers. The males are ginger and the females black. Look here for more information.

Mason bees, especially Red mason bee (Osmia bicornis), are starting to emerge now and you will probably only see the males at the moment as the females emerge later. The bees are the size of a honey bee and have a reddish abdomen. Males have white hairs covering the face. Females are larger than the males and have a black face.


Other mining bees you can see are for example Andrena nitida, Andrena bicolor and Andrena minutula.


Butterflies: So far I have seen quite a lot of Brimstone butterflies this year. There are also Small tortoiseshell and Peacock butterflies flying around and Small whites, probably looking for cabbage plants. I have also seen some Comma`s basking in the sunshine. Also have a look at our blog post about early spring butterflies.

Flies: There is one fly out and about at the moment which pretends to be a bee. It is the Bee fly (Bombylius sp.) which looks like a fluffy brown ball hovering around flowers. Look here for more information about this interesting pollinator.

I have also seen some hoverflies but they are mostly species which are small and unimpressive and can easily be overlooked. One more disitinctive hoverfly out now is the Marmalad hoverfly (Episyrphus balteatus), a small hoverfly with a black and yellow body. The bigger hoverflies you can see now are mostly the bee-mimic hoverflies (Eristalis tenax and E. pertinax) and they like to visit dandelion flowers but can also be found on other spring flowers such as Flowering currant (Ribes sanguineum) and Lesser celandine (Ficaria verna). The main season for hoverflies is summer and late summer when you can often find them in great numbers.

Most early pollinators like to fly on warm and sunny days and will often be abundant in places with lots of early spring flowers. So next time you are out and about have a closer look and you will be amazed at how many different pollinators you can spot.
Posted by Reading team at 15:55