Fingers on buzzers, what’s that bumble...?

Today we joined the Avon Wildlife Trust volunteers for a bumblebee ID course guided by the Bumblebee Conservation Trust.

The course was organised at the Folly Farm Centre, located in the Chew Valley just 40 minutes outside of Bristol. The Farm is owned by the Trust and its wildflower meadows and woodlands are Sites of Scientific Interest (SSSI). Unspoilt by pesticides and fertilizers the meadows are covered in ant hills, wild grasses and tussocks, perfect for bumblebees and solitary bees! The weather  was on our side as well, with bright sunshine and only sporadic gusts of wind!

After biscuits and tea we got a brief course on how to spot and recognize the most common six species, as well as distinguish females (pollen baskets present on hind legs) from males (pollen baskets absent). Most bumblebees seen foraging will be workers who are females; males, on the other hand, once out of the nest never go back and will spend their time lazily sitting on flowers and sipping nectar.  Sometimes you can spot them sleeping under a leaf or a flower head!

After all the theory and a good lunch this is what we found out in the field:

For more information about the work carried out by the Trust and on how to spot a rare bumble bee visit: http://bumblebeeconservation.org/.

During our escapade at Folly Farm we learnt that Bumblebee queens are attracted to the smell of mice borrows where they like to nest. So if you happen to have old mice borrows in your garden think twice before getting rid of them!

We also learnt that artificial nests also exist for bumblebees - they are boxes that can be placed below ground. However having a box is not enough to get a buzzing garden, you still need to attract them to it... location is of course essential! Rusty from Washington has some tips for people who might own one and are desolated by its emptiness:
http://www.honeybeesuite.com/how-to-attract-bumbles-to-an-artificial-nest/

An example of great nesting habitat for bumblebees are the Folly Farm meadows which are full of tussock grass and ant hills... 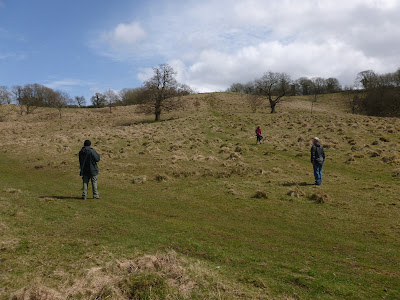 One Buff Tailed Bumblebe (B. terrestris) queen we found was completely covered in large red/pink mites about 2mm long. They were all over her thorax, although the queen seemed to be unaffected by the alien presence. Back in the office we searched the web about the effect of these mites on bumblebees!

From Ted Benton’s book Bumblebees (New Naturalist series):
"Most [mites] are believed to be harmless commensals [i.e. they just live alongside the bees, not affecting them], and there is even some evidence that they may be beneficial, as they consume moulds and detritus in the nest. However, there is also the possibility that they may act as vectors for virulent microorganisms."
It looks like the mites we saw were probably just 'hitching a lift' on the bumblebee!